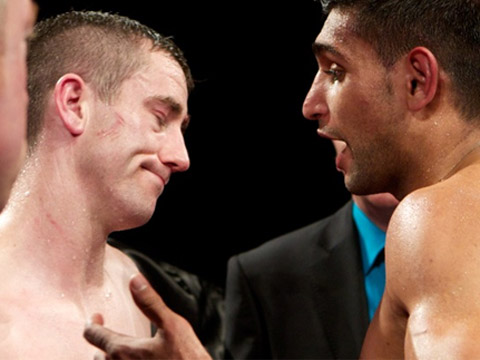 April has seen some big fights in the Welterweight and Junior Welterweight divisions; all of which I watched with interest as I could soon be in the ring with Marcos Maidana, Andre Berto or Victor Ortiz in big fights Stateside.

Victor Ortiz shocked the boxing world with his performance against Berto and there are some prize fights waiting for him now. I am ranked by the WBC so I am looking to keep rising higher up those rankings as I would love to challenge him.

Elsewhere, Erik Morales showed that he has much more in the tank after his loss to Marcos Maidana, whilst Maidana showed that he is just brute strength and very raw. Again I would fancy my chances against him.

I was ringside at the Amir Khan v Paul McCloskey event a couple weeks ago and, although the show wasn’t the most exciting, I was shocked by Lee Purdy’s knockout win against Craig Watson. I expected a comfortable win from Craig and it looked like a routine defence until he was caught with a good right hand which ended the fight in the middle rounds.

But it wasn’t just in the ring where the action was happening.

As everyone knows I’ve been getting ‘called out’ from all corners of Britain since winning the British title against Lenny Daws. Darren Hamilton, Peter McDonagh and Frankie Gavin have all got paper inches due to expressing a desire to fight me.

Well Frankie Gavin was ringside for the Khan v McCloskey fight. He approached me and we had a little chat and he seems like a nice enough guy. If he can win a European Title or win an eliminator for the British Title then we could get it on sometime in 2012.

Going back to the Amir Khan fight itself, it was a big letdown after all the hype from the self proclaimed King Khan. I expected more from Paul; chances like that are once in a lifetime and I feel he could have put up more of a fight. Khan didn’t look great but he did what he had to do – firing off quick combinations and winning all the rounds. I would have loved Paul to have won against Khan as I would have thrown my name in the hat to be his first defence for the WBA World title… but it wasn’t to be.

Khan will move onto Tim Bradley next and I’m not too convinced he can win; I have a feeling Tim will run him over just like he did with Devon Alexander. It’ll be one I’ll keep my eye on for sure.

As for me, I’m due to make the first defence of my British title on the undercard of the much-hyped Derek Chisora v Tyson Fury clash – a fight I am looking forward to and one which forms the first part of my plan to defend my title three times and win the Lonsdale belt outright.

I worked with Don Charles, who trains Derek, for my fight with Lenny Daws so I can assure you that Derek will be in great shape for his fight with Fury. I have never been a fan of Fury so I expect Derek to stop him anytime from the middle rounds.

I was offered an IBF World title eliminator with Lamont Peterson in Las Vegas for this week Friday but unfortunately they gave me ten days notice which I was never going to accept – and I also don’t think too highly of Lamont Peterson. I would beat him any day of the week given the necessary time to get ready.

But there’s no point fighting unprepared. Training hard for any of these opportunities is vital and it feels good to be back in the gym and sparring with my All Stars team mates. I plan on heading to New York City and finishing up my training camp with US trainers Harry Keit and Jihad Abdul-azizz at Gleason’s gym in Brooklyn, and I’m looking forward to it – especially with talk of a World title eliminator in America very soon, so watch this space.

Other than Amir Khan, no British Welterweight or Junior Welterweight has fought and beaten the level of opposition I have so 2011 is the year I am looking to step it up a notch.

Talking of ‘upping the game’, I am impressed with Hatton promotion’s rise in the boxing world and Matchroom seem to be getting back into big time boxing which is a good thing for fighters and fans alike.

As everyone can see I also have a new website at the minute and I hope you enjoy it as much as I do.

Believe and you can achieve.