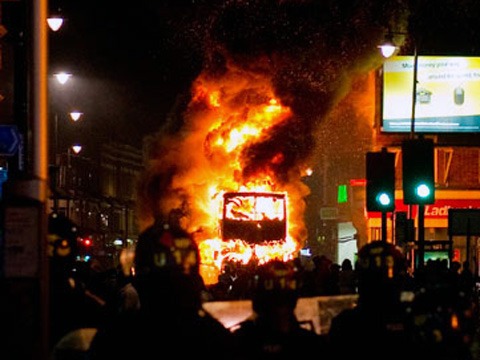 In Britain, we now have corrupt cops, MPs abusing their expenses, bankers ruining our economy and News International tapping people’s phones. Other than a few MPs none of the above will go to prison.

Therefore, the people we are supposed to look up to are not the best role models.

If a normal person had done any of the above they would probably have been incarcerated.

The Labour leader, Ed Miliband seems more in touch than Prime Minister, David Cameron. He understands that normal people have been neglected and there are many social problems in England.

If these riots had happened when I was a teenager I would probably have been up for looting and rioting. I was expelled by two schools and it felt like the Government and society had given up on me.

Many of the youths and young adults feel this way now. There are no jobs, University fees have skyrocketed and they feel like there is no hope for their future.

It appears that all David Cameron is thinking about is policing, he is not thinking of how to support and help the people in need.

We can call them hooligans and trouble makers but it feels that I felt the same way not so long ago.

Nobody believed in me and I was left with absolutely no hope whatsoever.

If it wasn’t for my own drive and perseverance and wanting to make something of my life I would not be where I am today.

People’s opinions of me have never mattered to me. I always believed in myself and with hard work you can achieve your goals.

These communities are lacking positive role models or people that youngsters can look up to and listen to. If Tottenham had that, the youths and young adults would not have rioted. They were frustrated but they did not know how to voice that frustration.

Local MP David Lammy only shows up after the damage was done, instead of being with the mourners after Mark Duggan was shot and killed by the police. There is an on-going investigation into the circumstances he died under.

David Cameron says that parents need to take more responsibility with their kids.

I agree with this to a point. I can say that my parents were not criminals and taught me right from wrong. But that did not stop me from getting expelled from two schools, or getting involved in criminal activities.

My mother would ground me but when she forgot to lock the door I would run outside. My father would use very intense physical discipline. I was scared of my father growing up but that again did not stop me from doing what I wanted to do.

The Rioting and Looting in Tottenham, Hackney, Manchester and Birmingham by locals was pure stupidity as the rioters and looters were destroying their own communities and their own local stores.

On a more positive note, Tottenham Hotspur wants to build a new stadium at White Hart Lane and that will bring more jobs to the area and help regenerate and redevelop Tottenham.

This was not a race riot. Muslims, Sikhs, Whites and Blacks have been brought together through this ordeal. It was young adults and youths frustrated with their life and lack of hope in Britain.

Some normal law abiding citizens took advantage of the looting to do petty thieving whilst the criminals went about their normal business.

Communities all over Britain are coming together through this negative situation but how long will this last as the drastic cuts to jobs and public services will soon be felt again and I will not be shocked if there is another outburst from the youths.

They feel like they have nothing to lose and it is a shame the Government is not acknowledging the real problem at the heart of this.

I feel David Cameron and his Government are out of touch with normal people and they are not listening to the social troubles in our country.

Kids and young adults need to be shown that with hard work anything can be achieved as I’m living proof of that. I was expelled from two schools, spent time in prison for robbery but even though nothing positive was expected of me and no one believed in me. I expected and demanded more out of me and I believed in me.

Some of our People need real and active support and the Government must realise this now and act if any things going to change in our inner cities in our lifetime.