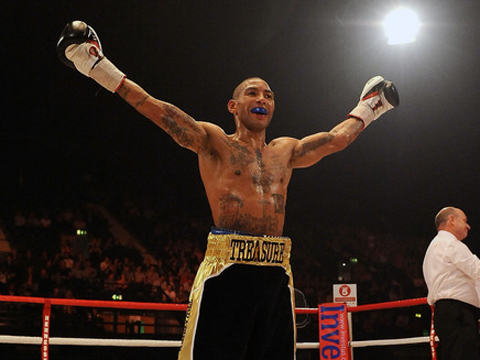 This week has been an extraordinarily productive and exciting week for me.

On Tuesday, Hatton Promotions announced that I would be their latest signing.

I believe with Ricky and his team backing me, absolutely anything is possible.

I have been self-managed for the majority of my career and it is time to move to the next level and now with Europe’s number one promoter behind me, the timing could not be better.

I am ready to fight the World’s best, just like Ricky did, and I know he can make that happen.

It’s a great feeling when you and your promoter share the same ambition.

That would be more than enough of an announcement for any normal week, but I have also been made an ambassador for Ted Baker this week which is truly amazing.

The Ted Baker team are some of the most passionate and professional people I have had the pleasure of working with and you just want to see the gear. And see it you will, on me, all the time. Great British style with a little edge, just the way I like it.

And if that wasn’t enough…. We have been working on a number of local projects that would benefit the young people where I grew up.

The first initiative to come to fruition is a new boxing gym which will be opening in Queen’s Park, here in north west London, where I’m from.

It gives me enormous pleasure to announce that it will be called Treasure’s Boxing Gym.

I have been a member of All Stars boxing club for some 23 years now, so I am very proud to follow in the footsteps of my mentor, Mr. Isola Akay MBE.

Many great boxers have passed through the doors of his iconic gym over the years. I joined back in 1988.

We intend to follow the brilliant example and track record of the All Stars gym, if we can achieve just a small part of what they have done then we will have made a huge difference to this part of London.

Hopefully the two gyms can work alongside each other and offer the local kids something positive to do whilst teaching them about the benefits of having a healthy lifestyle, nutrition, and self-discipline through boxing.

Mr Akay’s son, Tee Jay Akay, was British cruiserweight champion when I first joined All Stars as a kid, and just seeing him and Mr. Akay on TV was a source of great inspiration. This has helped fuel my ambitions and proved the power of ‘local’ role models to those of us from more underprivileged backgrounds.

Hopefully I can now inspire some kids from both All Stars and Treasure’s boxing gyms to follow in my footsteps.

And just to round off a fantastic week, I am a guest judge at Spencer Fearon’s Hard Knock Promotions ‘Ring Card’ girl competition on Saturday.

This is a bit of light hearted fun, as over 20 models will compete for a chance to win a contract for Hard Knock’s televised shows. Should be an interesting and testing afternoon.

Back to business, I start training camp in New York on Monday for my British title defence with Nigel Wright. I have lined up sparring with some of the World’s best and toughest southpaws.

So, what a week – joining Hatton’s is I believe the final missing piece of my ‘ambitions’ jigsaw.