BOXING AND THE RECESSION 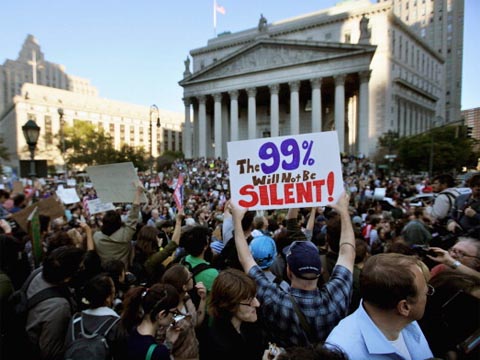 Here in New York there is a discernible and growing feeling of outrage in the air. The residents are seriously unhappy with the Wall Street bankers and the US Government.

I am constantly reading about corrupt and ineffectual politicians and it’s clear that the financial situation has finally taken its toll on the New Yorkers.

The dollar has been devalued, the education and health systems are not in the best shape and the banker’s excesses continue to be a visible strain on Americans.

More than 5,000 New Yorkers took to Times Square in Manhattan to voice their disapproval of Wall Street.

Over 80 countries had ‘anti-austerity’ demonstrations with many turning violent.

The Wall Street movement has now amassed $230,000 from donations.

The straight talking speakers in Times Square criticised the United States capitalist leaders to roars of approval. The movement claims banks and businesses have unfairly tilted the economy towards the wealthy while the middle and lower classes suffer.

This has the feeling of the beginning not the end.

Even my gym in Brooklyn has had to look closely at its finance’s and felt forced to start cutting staff pay. I personally know of 5 staff members who have walked out in disgust.

I witnessed some of the gym instructors with over 20 years unblemished service, shed tears as they were forced to leave their place of work and genuine friends behind.

There is no doubt that the whole of America is feeling the financial strain.

I’m staying in Brooklyn whilst I am here and I see adults going off to work and kids going to school, all hoping for that better future. While kids are going to college to get their education, there is a growing feeling that there will be no jobs waiting for them when they graduate.

This is starting to feel all too familiar.

America is in a similar predicament to Britain. However, the political approaches feel so different.

It appears that President Obama has chosen to go the opposite route to Prime Minister Cameron. He is investing in America while Cameron is cutting public services in Britain.

The gamble of allowing all comers into the Eurozone is unravelling.

The Greeks should never have been allowed into the Eurozone, as now they are a massive strain on the European Union’s governments, who are spending billions they cannot afford on keeping Greece afloat.

The Greek government fiddled its data to gain entry into the EU. The EU’s fixation on building the ‘United States of Europe’ meant they took Greece’s false financial situation at face value, without careful consideration or the necessary due diligence and now they have to pay for their complacency.

Governments don’t suffer it’s us the people that pay the price.

Even though Britain is not part of the Eurozone, the EU commissioner, Jose Manuel Barroso, thinks we should help bail out Greece as we gave £7 billion to support Ireland.

Ireland is our closest neighbour, and we share a deep and historic relationship with them. Germany and France seem to be the two countries in the EU who will have to put the most money into Greece, as the other two major Eurozone economies, Italy and Spain, are broke right now.

I hope Prime Minister Cameron sticks to his guns, as we didn’t get Greece into their current situation. We warned everyone about joining the Euro, but they chose not to listen.

We have our own crisis at home with all public services being cut, we cannot afford to give money to other countries that we clearly don’t have. Right now we need to look after our own.

I fear that 2012 will see the rise of civil unrest leading to strikes in the UK, as the savage austerity measures start to take hold on everyday people.

David Cameron must stay firm and strong, just like Margaret Thatcher did 32 years ago in the ‘winter of discontent’.

In times of financial crisis, boxing tends to thrive as people look to escape from their financial troubles and go to watch a good honest punch up.

In America, during the great depression of 1929 to 1940, boxing thrived with some historic matches that brought many different people together.

Recent immigrants to America joined the downtrodden and thrived in a boxing industry which saw Jewish, Italian and Irish fighters become boxing stars across America.

They became the heroes that the hungry crowds could relate to in place of their failing and ‘out of touch’ politicians.

History has that horrible habit of repeating itself but the politicians never seem to learn the lessons.

The world has been here before, and recovered to thrive again.

This time around, given the immediacy of global TV coverage and social media, people of all nations across the planet will band together to demand the necessary actions that will steer us out of this crisis.