WHEN THE GOING GETS TOUGH 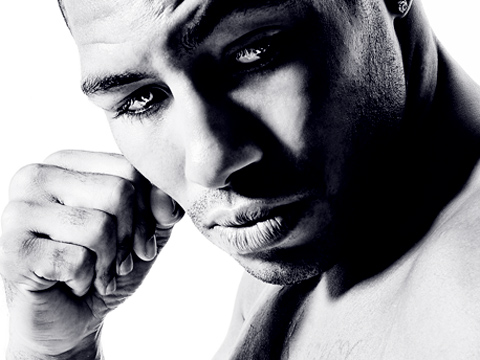 It’s the end of my fourth week of training camp and this week’s workouts have been my most intensive so far. I was excited about the high level of sparring I had arranged and it did not disappoint for a moment.

In Britain, you just cannot get this level of sparring. I’m sparring consistently against some of the best in the world who are based in New York.

The high level of sparring is bringing out the very best in me. Former two time world title challenger, Raul Frank, has seen my sparring sessions this week, and commented that “this is the best he has seen (of me) in all the years I have been coming to New York”.

My friend Francisco ‘Gato’ Figueroa, who lost to Randall Bailey in a world title eliminator two years ago, said after our sparring session that he can see my improvement. Our sparring sessions are legendary and can be seen on his ‘webisodes’, going back nearly four years when we initially met up in the Catskills mountains. He had been hired as a sparring partner for Delvin Rodriguez. We built a friendship from there, and he gave me some good laughs whilst I was focusing on my fight with Ali Oubaali.

My sparring session with Argenis Mendez had people stop their workouts to watch us go at it. He is a skilful fighter who went to the Olympics, representing his country, the Dominican Republic.

Joan Guzman is his country’s leading fighter and he is just behind him. So that speaks volumes of the talent he has.

A trainer who has worked at Gleason’s gym over the last two years commented after watching a sparring session of mine, that I’m “the first real active fighter” that he has seen here. He, like many of the other trainers has been impressed by the work that I put myself through. They have seen world champions come through the doors and they can see that I have that world champion potential.

I am the most experienced current British champion. Two more defences and I can move back on the world stage. I am very proud to be British champion, and taking time out from my long term goal of fighting the world’s best, to have a Lonsdale belt for keeps obviously means a lot to me.

2012 will see new light welterweight world champions for the WBC, WBO, WBA and IBF organisations as Amir Khan and Timothy Bradley will both move up to welterweight, and Erik Morales will move down to lightweight.

Danny Garcia, Marcos Maidana, Lucas Matthysse, Humberto Soto and Lamont Peterson will be the fighters next in line for any vacant titles. I am willing to fight any of them, and I am capable of beating them, as my record suggests.

Too many British fighters expect the big fights to ‘come to them’, and in the end that is why many big fights do not happen for them. Maidana, Matthysse, Soto and Peterson are on my ‘hit-list’ and I will be working with Hatton Promotions to make these fights happen in the near future. There is a healthy buzz at Hatton’s at the moment.

Former world champion, Yuri Foreman, was sparring this week in Gleason’s gym. I remained behind to watch him go through some rounds. He is a talented fighter who is studying to be a rabbi. I sparred with Yuri a few years ago and it was an enjoyable experience. I’m sure we’ll spar again in the future.

Iran Barkley was also in the gym this week. He had some wars with Thomas ‘The Hitman’ Hearns, James Toney, Michael Nunn, Roberto Duran, Trevor Berbick and Nigel Benn. Iran fought a ‘who’s who’ of boxing. Seeing ex-fighter’s like him inspire me to fight the elite but also serve to ensure that I don’t stay in boxing too long.

My goal is to have 20 more wins and 6 more fights in the US. Finishing my career with 50 wins, fighting in America, winning titles and investing my ring earnings wisely, are at the forefront of my mind.

I’ve earned my reputation as a globe-trotting fighter and Michael Katsidis has earned a similar reputation. He will fight anyone, anywhere. He fights Ricky Burns this weekend, at my favourite UK venue, Wembley Arena.

After acknowledging that he was struggling at the weight, Ricky Burns gave up his WBO 130lbs title. It is also clear that Frank Warren is not keen on his champions travelling to the US for risky assignments. Ricky has been rewarded with a fight with Katsidis up at 135lbs.

The ‘Brit Basher’ as Katsidis is now known has already knocked out two of Frank Warren’s fighters in the past; Graham Earl and Kevin Mitchell. I used to spar with Graham when I was a novice professional and it was good sparring at that time in my career. I was his main sparring partner when he was supposed to challenge for the European title, that fight never happened due to Juan Carlos Diaz Melero picking up an injury whilst training.

Ricky Burns came to real prominence when he beat Graham Earl in an eight rounder, back in 2005 when he was just 9-0 and Graham was the reigning British champion. So he is obviously talented, but it is questionable whether that is talent enough to win him the fight this weekend. Katsidis has experience that you cannot buy. Katsidis has only lost to the best in the business.

Ricky’s trainer asked me if I was interested in helping them out with sparring in the preparation for this fight. I would have loved to have gone up to Scotland, but if Ricky can pull this one off, possibly in the future we can make it happen.

Other than Amir Khan, there is no one from the 135lbs to 147lbs divisions in Britain more experienced and successful as I have been on the world scene. I understand why they would call upon me for sparring.

Another British fighter who is known for his potential is Frankie Gavin. He was the first British world amateur gold medallist. He called me ‘out’ after my title win over Lenny Daws, and continued to challenge me, despite his poor performance in wins over Young Mutley and Curtis Woodhouse.

I never watched Frankie as an amateur, so I don’t know of the amazing talent he is supposed to have, as the two professional fights of his I have watched had me dosing off. I wasn’t impressed with his wins over Lomax and Mutley.

Frankie failed to make weight for the Olympics and missed out on winning a medal which he was the favourite for.

Frank Warren signed him in a blaze of publicity and probably thought he had the next Amir Khan, but so far this has proven not to be the case.

Ricardo Williams, Olympic silver medallist probably had even more talent than Frankie Gavin. He beat my friend, Ajose Olusegun, in the 2000 Olympic quarter finals. Some in the US said he had more talent that Floyd Mayweather Jr.

Lou DiBella signed him to a promotional agreement and gave him a reported 1.2 million dollars as a signing on fee but he threw away his talent. He ended up in prison for dealing in narcotics.

Boxing is littered with talented fighters that never make the grade. You can only get so far with talent alone. It’s the hours you spend in the gym and on the road that makes champions.

Frankie has had some difficult personal problems, and if what I have recently heard is true, then we might all better understand why he could not go through with the fight. I hope he can get over this and get on with his career.

Dean Byrne took Frankie Gavin’s spot against Frenchman Frank Haroche Horta. I know Dean from my time at the TKO gym in Canning Town. We sparred then and also when I took a trip to the Wildcard gym in Los Angeles, where he was based for a couple years under Freddie Roach.

Dean has sparred with Amir Khan and Manny Pacquiao loads of times amongst a host of other top fighters, so he has the talent. It’s up to him how far he goes now. He lost to Horta but he took the fight on just 24 hours’ notice, after fighting the week before.

He took one for the team and I’m sure Frank Warren will repay him for saving the show which was live on Box Nation.