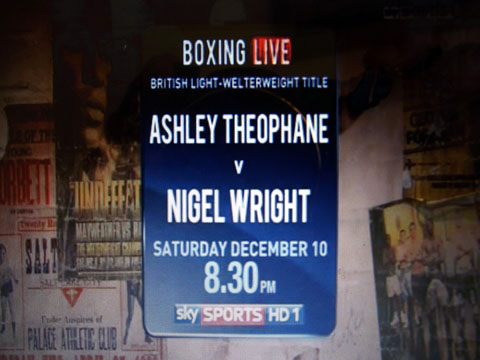 Last week I got through some of the most physically and mentally draining sparring sessions I have had in my life.

I’ve sparred with some of New York City’s best southpaws; who have been strong, skilful and lightning fast. If my fight with Nigel Wright was next week, I would be physically ready.

I loved my intense sparring with world title challenger, Argenis Mendez, whilst not a southpaw, he has skills, speed and experience at the highest level. It has been a truly wonderful experience to help each other, as he is fighting this weekend in his native Dominican Republic. We completed around twenty five rounds. The gym would always stop and watch us when we went at it, as it was very competitive.

The Dominican Republic has produced two other skilful fighters over the last five years in Joan Guzman and Elio Rojas, who have been world champions. I have sparred with both of them in the past at Gleason’s gym.

Elio used to be trained by Lennox Blackmoore, when I first came to Gleason’s gym in 2005. Elio would play with many of the fighters in the gym but I held my own with him. His manager Antonio Tineo was so impressed that he wanted to sign me.

On occasion you spar with some fighters, and you just know they are destined to be a world champion and I knew that from when I first sparred with Elio.

Sparring with former IBF world number three, Francisco ‘Gato’ Figueroa, has been very worthwhile. Twenty two rounds of quality southpaw work for me. ‘Gato’ got to world contender status, but after dropping Randall Bailey in their world title eliminator, he got caught with a great shot and was stopped. Randall isn’t called the ‘KO Kid’ for no reason.

Randall and I had a slanging match over Twitter and Facebook, in the lead up to my fight with Jason Cook, as he accused me of ducking him, which couldn’t be further from the truth. I believe I would and could beat him, but I was offered just half of what I earned to fight Lenny Daws for the British title. So as they say in America, “If it doesn’t make dollars, it doesn’t make sense”. The IBF later dropped me by ten places for not accepting the disrespectful offer from the promoters for that world title eliminator.

Andre Berto has just vacated the IBF Welterweight strap for the same reason I rejected the Bailey fight. HBO declined to televise it, as they wanted a rematch with Victor Ortiz for Berto instead, which looks to go ahead in January, if promoter Lou DiBella gets his way.

Speaking of Lou DiBella, he did a great job with Paul Malignaggi, and he has another, if not more talented fighter in Ajose Olusegun. I’m optimistic Ajose will get his shot at the WBC 140lb title by next summer.

Luis Collazo, the former world champion was really great sparring for me. I hadn’t even been in New York for twenty four hours, and I was sparring this experienced fighter, who also happened to be a southpaw.

In this camp I have been really spoilt for quality sparring that you just cannot buy. Luis was fighting the following week against Freddy Hernandez, who Andre Berto had previously knocked out.

I really enjoyed the session I had with Luis. He was strong, fast and skilful. That sparring session alone made me feel like my trip to New York was worthwhile, and that was just my first day here.

I sparred eight rounds with my good friend, Dmitriy Salita. Dmitriy is a former WBA world number one and world title challenger. Both he and Matthew Hatton are eyeing a tilt at the WBA interim champion, Ismael El Massoudi, at Madison Square Garden in January. As Ricky Hatton is my promoter and Dimitriy is a good friend, I’m sitting on the fence on this one.

I have sparred with Dean and Scott Burrell for my fights going back to Danny Garcia, Delvin Rodriguez, Lenny Daws and Jason Cook. I rate these fighting twins. They were born in New York City, but raised in London, where they learned their craft.

They came back to New York to hook up with trainer Hector Roca, who has worked with many world champions in his career. If these fighters don’t get up to world contender status, I will only have their manager to blame, as they have all the basics in place. It’s just to manage them right and get the right fights at the right time. I know I make it sound sort of easy, but their precocious talent deserves contender status.

Scott said the other day that he has seen many world champions and world contenders come through Gleason’s gym, but I work the hardest out of everyone. That’s a big compliment which I truly appreciate! As I tell the twins, “you control your destiny so you have to give it your all”.

Far too many ex-fighters have deep regrets and I do not intend to share that feeling. I will continue to give my all to the sport of boxing, so in six years when I retire, I will have gone as far as my talent, hard work and dedication could take me.

Shawn Cameron and Mikkel Lespierre from Gleason’s gym are part of the coaching team for Joan Guzman and Argenis Mendez the two talented southpaws. They are two of the finest amateurs in New York City. I completed fifteen rounds with these guys and it was great work for me.

WBC world number one, Ajose Olusegun, who is now mandatory challenger to Erik Morales, is back in New York City.

As I helped him prepare for his wins over Nigel Wright, he has helped me as I defend my title against Wright. Ajose is one of the best southpaws in the world, and it was a great mental boost to complete some rounds with him. We have been sparring for over ten years now. I remember after some of our sessions in London, that people watching would comment it was better than fights they had been to and that we should charge for our sparring sessions.

I have really been spoilt for quality in this training camp. In my last week of sparring I went rounds with Francisco Figueroa, Leon Moore, Dmitriy Salita and Ajose Olusegun. Birds of a feather flock together. I surround myself with top fighters, as that keeps me raising my game.

2012 will see me defend my British title once more, as my endeavour is to own my very own Lonsdale belt outright.

After that I am targeting fights with Lamont Peterson, Humberto Soto, Marcos Maidana and Erik Morales. I’m working with Hatton Promotions to secure fights of this calibre next year. If I can get a fight with one of those four in 2012, I will be a very happy man.

My outstanding seven week training camp in New York City was the hardest I’ve ever put my body through. I have three weeks left until I fight Nigel Wright, and there will only be one winner and that is me. Whatever he tries to do I will have an answer for. I will break him down and then dismantle him, just like Jason Cook and Lenny Daws before him.

The weekly boxing programme, Ringside on Sky Sports in the UK, announced a big night of world boxing for 10th December when I fight Nigel Wright in the United Kingdom.

Action starts with the defence of my British title, and then moves to Germany, where Wladimir Klitschko defends his IBO, IBF, WBA and WBO world titles against David Haye former victim, Jean Mormeck.

To round off the night’s action, Amir Khan fights Lamont Peterson in Washington DC. Peterson declined to fight Khan in the UK in March, so Khan is now going behind ‘enemy lines’ just like I’m doing on the same night. My last fight was also on the same night as Khan’s last fight when I dismantled Jason Cook, and I’m expecting the same result for the both of us again.

I see all three of us champions regaining our titles.

Juan Manuel Marquez has in my opinion been hit with the wrong decision for the third time with Manny Pacquiao. I also thought he won the first two fights with Pacman.

Manny has been in the form of his life recently, but Marquez seems to be too technical for him. Manuel is 38 years old now. Promoter Bob Arum has offered him another rematch, and Freddy Roach thinks that he deserves another shot, but what will it prove now? He has lost twice and drawn once with Manny when it should be the other way round.

Bad decisions are part of boxing and I have been at the end of a few of them in my career, so I know how much it hurts. The public saw Manuel ‘robbed’, so he can hold his head up high.

Manny is the ‘cash cow’ at Top Rank at the moment, and a 100 million dollar fight with Floyd Mayweather is on the table and everyone involved is clearly aware of this.

Floyd Mayweather played with Marquez when they fought a couple years ago. Manny struggles with boxers, as was seen with Shane Mosley and Marquez. In my opinion, Floyd will dispose of Manny, all he needs to do is take the random style drug test and the richest fight in history will commence.

Felix Sturm was robbed blind when he fought Oscar De la Hoya in America. Oscar was due to fight Bernard Hopkins in his next fight, and Oscar became a seven time world champion with that win. Sometimes the business of boxing gets in the way of the sport of boxing.

2011 has been the year of numerous bad decisions. It seems such a shame when the wrong man wins.

Timothy Bradley beat a 40 year old Joel Casamayor, which was a pointless defence of his WBO strap. I rate Bradley as the ‘numero uno’ in the 140lbs division, but Amir Khan is willing to put his 147lbs campaign on hold, for a clash of the two best in the division. Hopefully, it will happen in 2012, just like the Mayweather Pacquiao should happen.

It was very sad to hear that the former undisputed heavyweight champion of the world, Joe Frazier, passed away last week.  A really sad moment for all of us connected to the world of boxing. He was one of the greatest heavyweights to grace the sport of boxing.

He had three seminal wars with Muhammad Ali with the ‘Thriller in Manila’ being one of the greatest fights in the history of boxing.

Their first fight was rightly titled the ‘Fight of the Century’ which was at Madison Square Garden in 1971.

When my father learned that I wanted to take up boxing as a career, he got me a collection of all the greatest fighters in boxing history. Smokin’ Joe Frazier was one of those fighters.

Joe was a true warrior and his legacy will continue to inspire and forever be told.