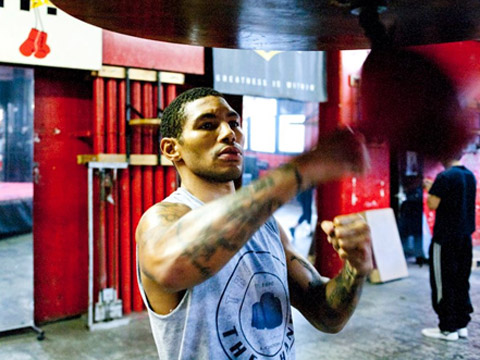 I sparred with my good friend Ajose Olusegun in my last week of training camp at Gleason’s gym. We have sparred so many times in the United Kingdom. We have sparred in London’s finest boxing gyms, from All Stars in Paddington, to Kronk in Kentish Town, to MyGym in Finchley and now Gleason’s gym in New York City.

I helped Ajose get ready for his fights with Nigel Wright, so it was nice that he repaid the favour. It was much more of a mental than physical boost, as I rate Ajose as one of the best fighters I have ever sparred with, alongside with Joan Guzman. I have learned loads from Ajose, so I am very pleased that he is on the verge of becoming the WBC world champion. He is now the mandatory challenger for WBC champion Erik Morales.

Ajose is the last man to beat Nigel Wright two years ago.

I have personally arranged all the above sparring, which just goes to show ‘the love and respect’ I have, and get from my fellow professionals in New York City. Not to mention my self-belief in only wanting to mix it with the very best.

The talent I have been sparring for this camp is on the level of what Floyd Mayweather and Manny Pacquiao would have at their disposal. So I really do appreciate the fighters and trainers who helped me get the absolute best out of my body. I completed 132 rounds sparring over my seven week training camp. I am more than ready.

My weight is around 146lbs, with two weeks to go until my weigh-in for the bout. I weighed in at 138lbs for my fight with Jason Cook. I normally put on 10lbs between the weigh in and the fight.

The week of my fight with Lenny Daws I was really sick. I was on the verge of pulling out. I did not turn up at the press conference as I did not want to give Lenny Daws a mental boost by seeing me unwell. In the end, despite not pleasing the promoter, (I needed a doctor’s note proving my illness) it worked out fine, as he didn’t know whether I was just struggling with the weight, or if I was perhaps just showing him a lack of respect by not turning up. Those who know me well know that I’m a complete professional and would never miss anything I’m signed up to do.

Spring Creek Towers was my hardest workout of the week. I am laser focused and highly motivated at the moment, which helps me get through the session. The pain you go through whilst running up the tower block is excruciating. I completed eighteen floors twelve times. It took me just under forty minutes. It was three thousand and twenty four steps.

This is my first week back in London, and I have had a busy week.

This week I completed 29 hours of training having only Sunday as a rest day. On Sunday I took a massage to refresh my body and revitalise my muscles.

I took a week off sparring following the 132 rounds of special sparring in New York City.

My strength and cardiovascular training is second to none. I am feeling in great shape, eating well and looking forward to win number thirty one.

I thought Jason Cook would have beaten Nigel Wright, if their British title eliminator had gone ahead. I am basically fighting the British Boxing Board of Control’s (BBBC’s) top two contenders ‘back to back’, so in 2011 I will have beaten the best 140lb fighters in Britain in the BBBC’s view.

In my opinion, Nigel Wright is very similar to my two previous fights; Lenny Daws and Jason Cook. He has heart, is well-conditioned and comes to win. Same approach, same mould – just a different name.

In my view, he brings nothing ‘new’ to the table and will crumble when put under pressure, just like Daws and Cook before him.

Nigel couldn’t beat Ajose Olusegun, Lenny Daws and Paul McCloskey, therefore he hasn’t got a chance of getting a result against me.

The British Boxing Board of Control awards dinner is a major event in the British boxing calendar, and it was a particular honour to be invited to the event.

Lloyd Honeyghan shared the same table. He is one of my favourite British boxers. He did the unthinkable and beat the ‘pound for pound’ champion, Don Curry, in America. I took a photo with him and my promoter, Ricky Hatton, at the event.  Amir Khan’s business adviser/lawyer was also on the same table, representing Amir.

Amir won the ‘Fighter of the Year’ award.

Some of Britain’s best fighters both past and present where at the awards; George Groves, Junior Witter, Kevin Mitchell, Barry McGuigan and Gavin Rees to name but a few.

I had my check weigh-in with a BBBC inspector on Wednesday. My weight is on target, as usual, so that is not an issue. I think most boxers would say that losing weight is the hardest part of our job. Training hard for me comes naturally. Losing weight is something I do not enjoy, but it is an essential part of my job, so I do it healthily and slowly over a two month period.

This was the fourth year of All Stars boxing gym’s Mayor Cup at Porchester Hall. Mayor of London, Boris Johnson, turned up as usual, providing great support for the cause.

Jamal Akay won the Mayor Cup for the second year in a row. He put in a great performance. He showed ‘ring smarts’, a boxing brain, speed, skill and he was determined to win. His mother, Terri Kelly, is an amateur boxing judge who was in attendance. His father, Mr. Akay, who founded All Stars boxing gym, some 37 years ago, was also watching on.

I don’t know how they were feeling, but I was on the edge of my seat. Mr. Akay started All Stars boxing gym for his son, Teejay Akay, back in the seventies. Teejay went to the 1984 Olympics, losing to the great Evander Holyfield in the last eight. Teejay would go on to win the British cruiserweight title in his 7th professional fight which is still a record to this day.

On Friday, Sky Sports filmed me for their first class ‘Ringside’ TV programme, and my fight preview with Nigel Wright. For two hours at All Stars gym, I was interviewed, had my training filmed and completed some promotional shots. Hatton TV were also there, and my documentary crew were there to film from a ‘behind the scenes’ perspective.

I was named in ESPN’s New York City’s ‘Pound 4 Pound’ fighters list. I came in at twelve.

New York has many talented fighters such as Joan Guzman, Yuri Foreman, Peter Quillin, Argenis Mendez, Zab Judah, Sechew Powell  and Daniel Jacobs. So it was nice and positive to be mentioned in the same breath as these fighters.

After such a positive time in New York, it is sad to learn that we have lost some brilliant ambassadors for our sport of boxing.

Sadly, business man, Gus Robinson, who is very well known in the Sunderland area, where my next fight is being held, died last week at the age of 62. He was Nigel Wright’s manager. Nigel must be feeling the loss, but at the same time, it will fuel a burning desire in Nigel to push himself to the limit to win the British title for Gus.

It would be nice and appropriate if a ‘ten bell’ salute was held before our British title bout. My sincere condolences go out to Gus Robinson’s family and friends.

Mick Carney of Fitzroy Lodge died last weekend. He was a great guy and it is a shame to see that his life and major contribution to amateur boxing is over.

I had my first fight with All Stars at Fitzroy Lodge against Manus Barber. I went onto have a trilogy with Manus, losing two of the three. All three fights were very close, but I didn’t receive the decision.

Mick has been a friend to All Stars for over 30 years and he will be missed by many of the All Stars members.

Patrick Ford died just over a week ago. He put Guyana on the boxing map during his career. He once fought greats like Salvador Sanchez in 1980, and Eusebio Pedroza in 1981.

He finished his career with a record of 17-4. Guyanese fighters like Lennox Blackmoore, Wayne Braithwaite, Raul Frank and Vivian Harris all came after him. He paved the way.

Patrick used to be a coach at Gleason’s gym so it is very sad to hear of his passing.

We are in the toughest of industries and we put our bodies under the most severe pressure, and our careers are never as long as most others. There are some very special people like Gus, Mick and Patrick who give so much, so that we can make the most of our time in this tough and unforgiving industry.

Gentlemen, we salute you.