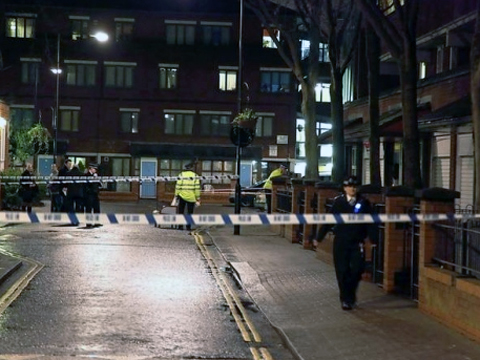 As the time of goodwill and celebration draws ever nearer, we all look forward to sharing memorable moments; the giving and receiving of heartfelt presents, a time of happiness and joy despite the gruesome economy, the general feeling of despondency, and the continuing conflicts across our planet.

In many neighbourhoods of London – our world’s only true international city along with New York, but perhaps the most cosmopolitan and tolerant city on the planet – we still have the most difficult ‘community’ challenges that it is high time we collectively look to resolve.

In the neighbourhood I’m from in west London, there are many young people still not achieving their potential. The causes are well documented, but perhaps not yet clearly understood, and definitely not widely accepted. Be it because of a feeling of isolation, a lack of support from the community at large, low self-esteem, lack of ambition or perhaps, just absolutely nothing to do; and the solution cannot possibly come from even more government cuts.

A life without hope is no life at all worth waking up for. Otherwise life can start to become all too expendable and not valued. These are dangerous and desperate circumstances, and all too prevalent and real in my neighbourhood. We are not unique in any developed society, but we have a tremendous opportunity to ‘change the game’ and vitally the outcome in London.

Last week there was a shooting incident that took place on the increasingly tough and local Mozart Estate. This was sadly not a rare occurrence.

The police were called at around 4pm to reports of shots fired in the Third Avenue area, which is in my W10 district of west London.  They found a young man who had received multiple gunshot wounds. He was taken to a central London hospital. He received three gunshot wounds, two to the chest and one to the stomach and remains in a stable but critical condition in hospital.

Just a few days before Christmas! Goodwill to all men is no longer a universal message that we all understand or practice.

A cordon was put in place by the police that has now been removed, but not before redefining the Christmas season for the adults and children who had to witness the scene.

No arrests have yet been made and police enquiries continue. This has become a regular occurrence in my neighbourhood; with the Mozart estate and the Kilburn estates consumed in a war which stems back over ten years. Yet most of the youngsters have no idea why this situation kicked off all those years ago.

Nobody cares anymore. If society doesn’t care, the gangs become relevant and oxygenated.

The Kilburn and Mozart Estates are right next to each other, which ‘makes’ them neighbours, a lot like Israel and Palestine. Similar locations, similar people, similar desires, but a total breakdown in communication accentuates the differences and forgets the similarities.

They just cannot live in harmony, otherwise they feel they will have nothing else to belong to or feel part of.

Even in Her Majesty’s Prison’s, the gangs are violently and relentlessly attacking each other.

What makes a young teenager carry a gun, sell drugs or commit robbery? What are the police and government doing to help the situation?

Do we need deterrents and punishment? Of course, but they need to make a tangible positive difference. Currently, it’s not working. In fact, just ‘locking people up’ doesn’t cease the flow of available volunteers who don’t fear incarceration.

Prisoners quickly become the heroes and ‘role models’ and galvanise the next generation of disaffected youth to take the wrong route.

When those same criminals come out of jail, they go back into the same situation, in the same environment, as that is all they know. Even if they wanted a job, the majority of local companies will never consider hiring an ex-felon.

There are no progressive arrangements for rehabilitation or for positively connecting back into the community, or even just a support network that cares and connects.

This is not just about my neighbourhood alone, as we have seen this with our servicemen returning from risking their lives for our nation in Afghanistan and Iraq, and they experience equal neglect. The disproportionate and tragic number of suicides and wrecked relationships our servicemen experience, perhaps point to this being a failure in a society that has become a little too complacent, selfish and less inclusive.

We all understand and accept (in the main), the need for austerity measures in these uncertain and difficult times, but unthinking and uncaring universal government cuts will only feed rising crime rates. Drug distribution does not naturally recognise a recession, if anything it will make drug users purchase even more as they look to escape from the desperately hard life of struggling in an inner city.

With spiralling costs and income being cut, it’s a huge struggle for hard working people with decent jobs, let alone the poorest people with only a bleak future in the tough confines of the inner city.

Whilst feeling naturally comfortable recently in my training camp in New York City. Brooklyn served to remind me so much of my local environment in London. With all the hustling and the ‘hard knocks’ life going on around me, it kept me hungry and focused on constantly continuing to try to make something of my life.

It also served to remind me that my surroundings and environment in London were not unique.

I have walked in many of these kids and young adults’ shoes. Where we saw no hope and the only realistic way to make money is to commit crimes, sell drugs and disobey our helpless parents.

Many people die, go to jail or just end up ‘down and out’, but it is that “Get rich or Die tryin” attitude, which 50 Cent exploded into the Hip-Hop scene talking about.

Many danced and sang along, unfortunately, very few really understood or cared.

Many of us from poor disadvantaged backgrounds understand that view point. Far too many of us have no visible alternative, and consequently, live by this motto.

I put the same dedication and focus into my boxing that many drug dealers put into their street hustle. What you put in, is what you get out. I have something inside me that drives me more than most boxers. I came from a desperately poor environment, I got expelled, and I went to prison. I was seen as a ‘no hope’ prospect.

Seeing my mother remain positive, work relentlessly and watch her pennies whilst raising my brother and I, has energised me and put a ‘towering inferno’ of a fire in my belly to be the very best I can be.

Being expelled from school didn’t stop me from finishing my education. I went to college and passed my GNVQ in Leisure and Tourism, and then I completed a BTEC Media course.

I am also a qualified personal fitness trainer, strength conditioner, nutritionist and dietician. If I didn’t turn professional, I would have definitely went to University; as my teachers encouraged and begged me to go, as they saw me cruise through my studies where others in my class struggled.

Even though I went to prison, it has not been enough to make me give up and perhaps take the more predictable and obvious route. I’m still fixated on being the best that I can be – and make my mum even prouder.

Too many people think because they are born in a poor and disadvantaged environment, means that you will fail and have no chance of achieving anything.

I’m living proof that you can achieve anything you want to, if you work as hard and as consistently as you can; the opportunity will eventually materialise and you will be hungry and ready to take it.

Maybe it is much harder for those of us from disadvantaged backgrounds to deliver, but so what? To work hard against the odds, achieve your dreams and fulfil your desires is what life is all about.

It is called living! And we all deserve that at the very least.

It hurts me to see so many talented and decent kids end up in jail, but this is the world we currently live in, and I unfortunately cannot see this situation changing for now.

All Stars Boxing Gym has been situated on the Harrow Road in west London, for nearly thirty years, and it has saved so many and brought so much happiness and hope to so many kids, teenagers and adults lives.

All Stars founder, Mr Akay has rightly been awarded an MBE amongst many other awards. This man, I’m privileged and honoured to call my mentor, is a shining example that if you want to achieve something – work hard, believe and it will come to fruition.

Impossible is just a word. Making the impossible, possible is the real beauty and reward of life.

Let’s all commit to work hard and harmoniously together to ensure that 2012 delivers ‘Peace and Prosperity’ for all those who share our fabulous city of London.