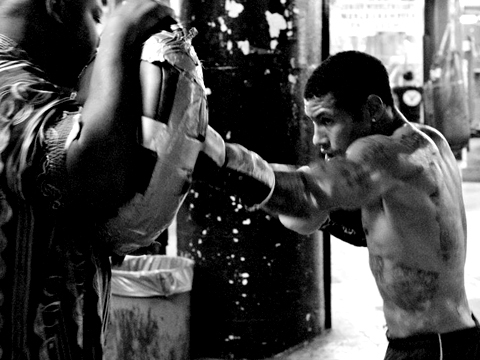 Being in training camp offers the time and space to pause and reflect. Many fighters do not enjoy the isolation but I put it to good use by taking the time to think things through and reflect more whilst I am here. Mentally it strengthens me to be here.

I’ve never had hype attached to my name. In all my big fights I was supposed to lose and nine times out of ten I won. The only time I lost was to WBC world number two Danny Garcia, and that was a split decision on his promoter’s show. Many ringside observers and fight fans thought I won. Danny fights Erik Morales for the WBC world title and if he is successful it screams for an obvious rematch. Given that he is promoted by Golden Boy Promotions and I’m with Hatton Promotions, and they have worked well together in the recent past, it should be a real possibility to make it happen and I’ll be ready and confident.

Whilst I’m thinking out aloud, just like Lennox Lewis, I plan on having kids after my boxing career. I have six more years as a professional athlete and that is my main focus right now.

My mother has always done her best for me and my brother, and I would want to be the same great parent to my kids. I just cannot do that right now as I’m only spending maybe six months a year in England. I’m a ‘hand’s on’ person in anything I do. If you want something done properly, do it yourself.

Every week I can feel that my fitness is improving and I can feel the increased strength and endurance that tells me that I’m getting into good shape.

I sparred with world title challenger and current WBA world number fifteen, Dmitriy Salita, on Monday at Starrett City in Brooklyn. Jimmy-O, the founder, died exactly a year ago and many gym users came for a big sparring session. There was a nice turn out. Jimmy-O was born in Britain, but came to America many years ago. He was Dmitry’s mentor and their great relationship reminded me of mine with All Stars founder, Isola Akay. He is a father figure to me, and I see him as an inspiration. Growing up, I could always go to him for advice. He was always there to support me.

I’ve completed twenty five hours training this week. I am getting fitter each day, and I can feel the tangible benefits of me coming out here to the States.

I love the fact I can say my occupation is a professional boxer. Not many people get to work in a job they actually enjoy.

I should be sparring with former World 154lb champion Yuri Foreman next week. Yuri and I sparred many years ago so it will be fun to trade punches once more.

Kendall Holt is supposed to be coming to Gleason’s gym on Tuesday for sparring. He is someone I would like to fight in the very near future. Kendal Holt would be another good name for me as he recently lost in a world title eliminator.

WBC International junior welterweight champion, Prawet Singwacha, would be another good opponent for me as he has a high ranking in the WBC and beating him would put me in touching distance of a career defining fight.

I’m looking forward to getting back on the world scene. I’m constantly stopped whilst I’m here in New York and nearly always asked when I am fighting in America?

I have unfinished business in Britain, even though beating fighters like Steve Williams or Lenny Daws are nothing more than routine wins for me. They’ll give me a workout if nothing else.

I’m itching to fight some ‘live’ opponents as I am fighting well within myself against domestic opposition.

Lee McCallister and Denis Shafikov was a fight that I watched with interest. I believed Shafikov would get a stoppage win by the ‘championship’ rounds and I was correct. Lee was way out of his league and quit on his stool citing a damaged hand. Well, I beg to differ.

I have fought with a damaged hand in the past. My finger bone popped out of its socket and I continued to fight. I even dropped my opponent and went on to win. The doctors said it is more painful than breaking a bone.

I would still go on to fight DeMarcus Corley six weeks later, which was another excruciating experience. I cannot even begin to describe the pain, but every time I hit DeMarcus I had to grit my teeth. I won that fight also.

It looked like Lee McCallister wanted a way out and found it. It was a disgrace to British boxing and he should never be allowed to fight for the European title again.

I received loads of messages the morning after the fight from fight fans saying how easily I would dismantle the European champion. I’m glad there are some people out there who appreciate my talent.

Devon Alexander and Marcos Maidana are two fighters I want to fight in the future. Alexander dealt with Maidana the same way I will deal with my mandatory challenger Steve Williams. Outbox, outfight and outmanoeuvre. It will be an easy night’s work. As world champion, Adrian Broner said on the undercard before his world title defence, ‎”I’m a make hard work like easy work. I’m a keep easy work, easy work. So at the end of the day it’s going to be easy money”.

Devon showed that Marcos can be out-boxed quite easily. DeMarcus Corley did just that for a few rounds in their fight a couple years back. Amir Khan struggled with Marcos Maidana. As Amir shipped heavy punishment in the later rounds, Prince Naseem wanted the fight to be stopped. Amir Khan is a good fighter, but there are many fighters better than him in the 140lb to 147lb divisions. All the same, I respect Amir for what he is doing, fighting the world’s best. Not many British fighters are willing to do that.

Adrian Broner is a future super star of the sport. Many people say boxing is dying. Not in my eyes it isn’t.

Ricky Burns vacated his belt and moved a whole weight division to stay away from Broner, and I can see why. He was superb against the unbeaten Eloy Perez stopping him in four rounds.

The kid has ‘star’ written all over him. In the next ten years I can see him becoming pound for pound king, if he continues his steady improvement.

Kaizer Mabuza and Steve Willis fight for the IBO title in the next few weeks and I would love to fight the winner in the summer as that would be a step in the right direction for a world title shot.

Kendal Holt and Tim Coleman fight very soon with the winner looking to get a world title shot. I would beat both of them. Hatton Promotions just need to make the fight. The 140lb division is alive and kicking.

I have an important domestic engagement coming up then my deal with Hatton Promotions will really come to life as we are targeting the world’s best fighters in the world’s most exciting division.