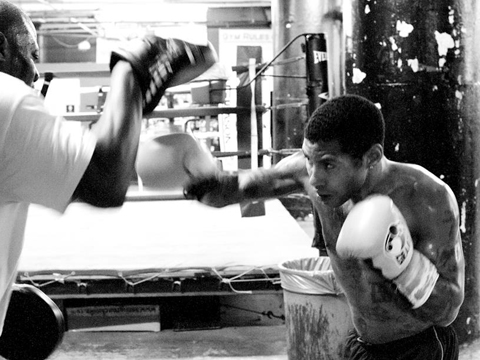 This is my fourth week of an eight week camp in America. Next week I will be in Las Vegas for a two week training camp at Mayweather’s boxing gym. I’m really excited at the prospect of watching the pound for pound king workout, and perhaps..

I’ve watched Manny Pacquiao work out at the Wildcard gym in Los Angeles, back in 2008 when Amir Khan had not long started working with Freddy Roach.

I’m a real student of the modern art of boxing, and love learning from the very
best. ‘Seeing is believing’ and nothing beats close proximity learning.

Manny Pacquiao has the most unbelievable work ethic in the gym, and since that experience, I have moved my training regime up a few notches.

I sparred with WBA 140lb world title challenger and current WBA 147lb world number fifteen, Dmitriy Salita, twice this week. Two other fighters joined in on our second session, and I got in some good rounds with two young hungry fighters.

On the road to success, there are always many distractions. ‘Stay focused and you will get to your destination’ is a motto I like to live by.

Last time I was in Las Vegas was for my 30th birthday celebrations. I had just
beaten IBF world number three, Delvin Rodriguez. So I went there to both recuperate and celebrate. Despite that being a great and memorable experience, this time I will be there for strictly business. I already have my tunnel vision tuned in, and will be my fully focused self.

My next, and just perhaps final defence of my British title, will be against Steve
Williams from Liverpool. Purse bids have been set for March 14th, and as long as Hatton Promotions win the bid; Richard Poxon’s plan is to do battle on April 21st, on the same card as Anthony Crolla’s British title defence against Derry Matthews in Oldham.  I can’t wait.

I sparred with Steve Williams before my fight with Lenny Daws. It was competitive, and I enjoyed it. Steve’s dad filmed it, but it has yet to make its way on to YouTube. I wonder why?

I will knock out Steve Williams for sure; I 100% believe that. I’m not Karl Place,
who crumbled in two rounds. I’m a proud British champion, but with no disrespect, my talent is being wasted on the domestic scene. I’m finding it boring, and I therefore find myself fighting well within myself. I need fighters who will really push me, much more mentally and emotionally, rather than just physically.

I like Steve as a person, he is a good guy and I do respect him as a fighter. After
I win the Lonsdale belt outright, after knocking him out, I hope he comes back to win the title after I’ve stepped up.

In all my British title fights I have been behind after four rounds against Alan
Bosworth, Lenny Daws, Jason Cook and Ben Murphy. Domestic fighters seem to come ‘flying out the blocks’ and after bravely giving it there all, they wear themselves out.

Title fights are a marathon not a sprint. It always appears that I give my opponents a head start, whilst working them out, but I always come back to knock them out or dismantle them. Steve Williams and I are destined to deliver an all action fight. There will only be one winner though, and for the avoidance of doubt – that’s me!

This week I have killed myself in the gym. Every subsequent week I have stepped up my workout ethic. I am confident that there are only a few special people in world boxing who push as consistently hard as I do.

Try pushing yourself through twenty five to thirty hours training every week. Only the very top athletes live for and relish this punishing schedule. The top swimmers, triathletes and marathon runners are the athletes that I really respect and admire, as we have similar work ethics.

I’m a qualified sports nutritionist and strength trainer, so I’m always searching
for ways to improve my already world class arsenal. Nutrition is very important, as that provides the energy to push harder in training. Many people do not really understand the importance of nutrition in sport.

I use Vitabotics Wellman supplements, such as Wellman sport and Imunnance. High5 sport bars, carbohydrate drinks and energy gels help me through my gruelling workouts.

Tim Coleman is fighting Kendall Holt, and Kaiser Mabuza just beat Steve Willis. I would love to fight the winner of either bout, as that would propel me towards a world title bout. Mabuza recently lost to Zab Judah in a world title fight, and Kendall Holt just lost to Danny Garcia in a world title eliminator, he is also a former world champion. These two fighters would be top of my wish list for a July fight.

WBC world number one, Ajose Olusegun, asked me who is next up for me and I told him that I am fighting my mandatory challenger, Steve Williams from Liverpool. Ajose said “that would be an easy fight for me”. He said “it will only be as hard as I make it”. He always compliments me as the hardest working fighter he knows.

Ajose Olusegun is a fighter I have always believed would become world champion, and this year will surely be his year. It gives me a real buzz when world class fighters like him rate me so highly.

Being in Brooklyn, just keeps me motivated, as there is so much poverty and
homelessness around. On occasion, I just can’t help being generous to those people in need, it only takes a wrong decision, or bad choices that can easily lead to a miserable path of suffering. I certainly wasn’t dealt an easy hand in life, but I am doing my utmost to make sure it ends up being a winning hand.

I completed 30 hours of intensive training this week, and I am currently weighing 154lbs. I’ve dropped 6lbs whilst being here.

I relaxed with a massage on Sunday to refresh my body for the week ahead in Las Vegas.

Adrian Broner said after his win “Call him the ‘can’ man; Ameri-cans, Afri-cans,
Mexi-cans, Domini-cans, anybody ‘can’ get it.” You’ve got to love his self-belief
and humour.  He is clearly enjoying his profession.

All great fighters have that natural self-belief, and at times that is the
difference between winning and losing. That inner belief kicks in at the toughest
moments, and fires you to prove again and again that you are the best.

Britain’s number one fighter, Carl Froch, will fight Lucien Bute in Nottingham on May 26th. Carl has fought the very best in the 168lb division. I can’t remember a British fighter who fought so many elite fighters back to back. From Mikkel Kessler, Andre Ward, Jermaine Taylor, Andre Dirrel, Jean Pascal, Glen Johnson to Arthur Abraham, not a light touch to be found.

Carl Froch is one of the true warriors of this generation, and I have so much
respect for him.

One of my favourite current fighters, Joan Guzman returned to the screens of ESPN on Friday night. He easily disposed of Jesus Pabon. He finished him with a left hook out of the southpaw stance.

I see this man train in the flesh all the time at Gleason’s gym, and it is inspiring
to train in his presence. His talent should have seen him on the level of Manny
Pacquiao and Floyd Mayweather. Joan on his day is big trouble for any of the 140lb fighters. 2012 may be the year he adds another world title belt around his waist.

Wladimir Klitschko disposed of Jean Mormeck in far too easy fashion on Saturday. Mormeck was a disgrace, and should never have been in the ring with the champ, but such is the sorry state of the heavyweight division.

Wladmir named Tyson Fury and David Price as future opponents. His next fight will be against Tony Thompson, whom he has already beaten. The Klitschko brothers are good fighters, but.

Larry Holmes reigned over a weak heavyweight division, as did Mike Tyson in the eighties, but not quite this weak.

Now the heavyweight division is boring and predictable.

The Klitschko brothers are great ambassadors of the sport, always respectful of
their opponents, and they know how to present themselves to the media.

In America, it is far more likely for a 6ft plus athletic youngster to be attracted
by NFL, basketball, or baseball.

The state of boxing is very good, but we need a competitive and exciting heavyweight division.

As we all know, the Olympics are in my home city this year, and I’m hoping that some new and hungry young talent emerges to help reignite a poor, and less than exciting heavyweight division.