IN THE PRESENCE OF GREATNESS 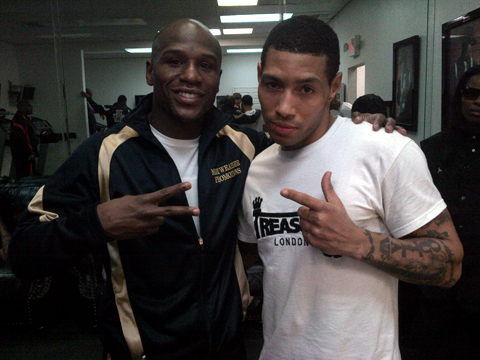 I don’t know of any other British fighters doing what I’m doing. I travel the world’s best gyms, learning from the very best fighters. Many fighters like staying in their comfort zone. Not me! I want to be pushed. I want to learn as much as I can. Boxing is a global sport, and I love being an active part of the world of boxing.

My second and unfortunately, last week at The Mayweather Gym in Las Vegas was truly amazing. Over the last two weeks I have pushed my body through fifty hours of gym and road work. It has been both punishing and exciting! I go to bed each night fired up and looking forward to the next day.

I arrive at the Mayweather gym at around 1pm, complete my workout then watch Floyd do his thing. I just can’t tear myself away, and I end up leaving there after 7pm. They were long days, but worth every minute as I allowed the knowledge to really soak in.

Watching Floyd Mayweather train is inspirational and motivational. I learnt so much just by watching him workout, he is very special and I will implement everything I learned and observed into my game.

On Monday there was a ‘who’s who’ gathered at his boxing gym. World champion, Yuriorkis Gamboa, was working out as I started my own workout.

I sparred with five fighters over the course of three days in the gym. One of the coaches at the gym said that ‘normally British fighters get bashed up in sparring here’, but I represented. I travel well as my record shows with wins in Saint Lucia, America and Germany.

Floyd dismantled Omar Henry, who was way out of his league. Then Floyd finished up with another stocky middleweight, Bastie Samir. Floyd sparred for around thirty minutes just stopping for sips off fluid every five minutes. He was sharp, fluent and commanding – a master class.

Watching Floyd train you could see the desire and hunger in his eyes. He pushed himself hard, with his team shouting ‘hard work and dedication’ as he dug deep.

Floyd’s training sessions were like a ‘friends and family’ get together. Around fifty people watched him train while music was pumping. The gym has a special aura about it on days that Floyd trains.

Bastie Samir, a strong middleweight earned his sparring partner wages on Tuesday. He stood ‘toe to toe’ with the pound for pound king. Watching up close, I knew that Floyd would make Bastie do more rounds as he wanted to break him down. There were times I thought Mayweather might knock him out, but Samir showed he has a great chin. Floyd has six sparring partners and chooses who he is going to spar when he arrives at the gym.

It is extremely tough and demanding work, but they are well looked after and it’s the best boxing learning available.

In the locker rooms on Wednesday, Floyd was saying that he fights at whatever weight he walks around at. He refuses to drain his body to make a particular weight. Floyd Mayweather is always in fantastic shape and never really goes much above 150lbs. He is a good example of how professional fighters should be. There are obvious reasons for all to see why he is one of the greatest fighters to ever walk the planet.

His uncle and trainer, Roger Mayweather thinks he is second only to the great Sugar Ray Robinson. Watching Floyd work it is clear to me that he is an all-time great, and can only be compared with the very best in history.

Floyd has a great commercial team around him, who deal with the business side of things. That along with his massive talent is why he is so marketable.

Floyd took a day off from sparring, after going three days straight. He started off with some shadow boxing; he then moved on to the pads with Roger Mayweather and followed this with the body bag with Nate Jones. He then went onto the heavy bag, then back into the ring to hit pads and the body bag. He finished up with some strength exercises. To think that his fight is still seven weeks’ away; he is fit enough now to do a twelve round fight, but Floyd is the very best for a reason.

Floyd shouted out whilst he was in the ring with everyone watching him that he liked my Treasure T Shirt. The man has great taste as well.

I took a photo with Floyd after he had finished his training session, and I had a chat with Leonard Elberbe.

All the guys at the Mayweather gym have shown me love. I will definitely be back.

J’Leon Love gave Floyd his best sparring session whilst I was there, and even impressed Roger Mayweather who thought he was the best out of the six sparring partners at the gym for Floyd. J’Leon can box and fight, so he and Floyd had some action packed rounds. Floyd’s accuracy is amazing. He rarely misses a punch, and his defence is a work of art. As he says defence wins fights and I couldn’t agree more.

I spoke to Cornelius Boza Edwards who became a world champion back in the day, when there were some really great fighters about. He fought some legendary fighters including, Alex Arguello, Hector Camacho, Jose Luis Ramirez and Bobby Chacon. He said that he has watched me fight and that “my time will come to win a world title”. That meant a lot coming from a man who did what I am doing, but at a higher level.

Right now I am learning from the best in the business. I get to watch Floyd Mayweather train at close quarters. There is no one better in the game, so being able to watch him at touching distance is just brilliant.

He is the King of the boxing world, and I am the King of the British 140lb Division. Having the opportunity to work with Roger Mayweather and Nate Jones has been a defining experience. He is a great coach and was a world champion in the nineteen eighties.

I have had the honour to watch some great fighters workout in the flesh; Floyd Mayweather, Manny Pacquiao, Joan Guzman and Yuriorkis Gamboa. These great fighters stand out even from the elite fighters. Watching these fighters has helped me add to my own game.

Floyd Mayweather is in a league of his own though.

Michael Jackson’s father Joe Jackson passed by the gym on Wednesday. It was an honour to see him and he still has a swagger about him.

I had a fabulous time training at Floyd’s gym. The ‘Money’ team made me feel very welcome and Britain’s Treasure will be back, as they have left the door open for me.

It is brilliant an inspiring place.

Every once in a while, you just feel you have been privileged to be in the presence of greatness. The last two weeks at The Mayweather Gym in Las Vegas has given me that privilege.