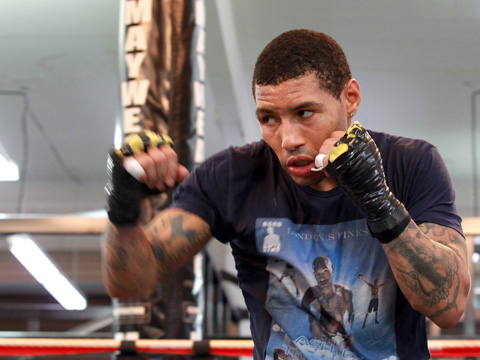 A brilliant first week of training now I’m back in London. I have already completed an eight week camp in America; splitting my time between the Mayweather Gym in Las Vegas and Gleason’s gym in New York.

I have six more weeks until I knock Steve Williams out. I’m really looking forward to winning the Lonsdale belt outright. If I’m correct no fighter in the 140lbs division has won it outright since Junior Witter, and we know what he went on to achieve.

Steve Williams is just a number to me; Mr 32. He will be my 32nd win. His name on my record is not that important. The win is all that matters.

Steve commented in a recent interview that I do “everything well”. I have to say that he is absolutely right. But it begs the obvious question; how is he supposed to beat me then? I have no obvious weaknesses. He cannot afford to try and outbox me. He has to come to fight, but better fighters than him have tried and failed.

As my brother commented the other day, “How can he expect to beat you if he can’t beat Lenny Daws? All he does is walk forward”.

I guess Steve Williams and his team have to stay in ‘dreamland’. He has a slow jab and a basic defence.

He reminds me a little of the Ancient Egyptian ‘mummy’ with his slow feet.

Steve Williams is certainly no better than Lenny Daws or Jason Cook. In fact! He was begging me for a pay day last June, so I asked Hennessey Sports if I could make a voluntary defence against him at Wembley Arena. Hennessey Sports and Channel 5 felt Jason Cook was a far more dangerous opponent, so they chose him instead.

We know what happened to him.

Steve goes on to knock out Karl ‘Bulb head’ Place, and is consequently a ‘threat’ to me now – Really??

I will be fighting Steve in his hometown of Liverpool. So that’s an extra motivation for him. I like this a lot. It is more pressure on him to perform in front of his fans.

Lenny Daws had the extra pressure of winning the Lonsdale belt outright. I like when fighters have that extra motivation to beat me. It means they will attack me more, and that means more openings. This will certainly result in a knock out win for me.

This fight is not going twelve rounds, that’s a promise.

I was chuffed to recently hear from a supporter of mine that “you’re an inspiration. You epitomise what a champion should be like”.

It is touching when people believe in me. The people whom I’m able to inspire, even just a little, motivate me to achieve the greatness I am truly capable of.

Talking of greatness; Muhammad Ali, who recently turned 70 years old, was in the habit of predicting the round he would knock his opponent out in.

I have made bold predictions about my last three opponents. I was very clear that all of them would be knocked out in the championship rounds.

Two out of three is not bad at all, especially when you consider that I knocked Lenny Daws down in the ninth, but just went about finishing him off a little wrong, and he managed to survive to the final bell.

So I am definitely not great yet, but I am well on the road to fulfilling the greatness that lies in me. So when I say that I will knock Steve out, believe me!

What the mind can conceive, it can achieve.

This Sunday saw me take my third day off during the course of the last two months. I’ve completed 27 hours training this week. I’m weighing 148lbs and I’m in great shape.

The last week of my eight week training camp in America saw me visit the IBF offices in New Jersey to meet with their President.

I’ve been ranked as high as fourth in their world rankings, but during the course of my British title reign, my ranking has slipped to 15th.

Victor Cayo, Vernon Paris and Tim Coleman have all been knocked out during the month of March; so my Treasure team and I thought that a meeting was due.

Let’s not forget my last loss was to current WBC world champion, Danny Garcia, over two years ago. Those who witnessed the fight, with two working eyes, thought I won.

When you fight a ‘well fancied’ boxer in his country, and on his promoter’s show, these ‘mistakes’ happen. They are an injustice, but unfortunately, still quite common place.

The IBF have now moved me up four places after our meeting, which is positive news. I’m also 11th in the WBC and 10th in the IBO world rankings, so I’m a bona fide elite fighter.

Building relationships in any business is the key to success.

Even though I have many years left in me as a professional fighter, I plan to guide a handful of talented fighters to the top when I retire. I’ve fought all over the world, and against some of the world’s best fighters. Given this rare and invaluable experience, I will plan and guide a similar route for my prospects.

Former WBO world champion, Scott Harrison, has recently been given back his boxing licence from the British Boxing Board of Control. Now, he would be a fighter that I would be interested in fighting soon, as he would look good on my record with a ‘W’ next to his name.

His fellow countryman, Alex Arthur, has also shown an interest in losing to me. So I could be facing one of Scotland’s recent international champions this year.

Juan Urango is fighting three weeks before I knock out Steve Williams in Liverpool. A fight between the two of us would be appealing to me (and many fight fans), as I’m always looking to fight the best in the world.

True world class fighters would have no problems with leaving the safety of Sheffield, Glasgow or Cardiff to fight the world’s best.

I’m more than happy to travel to fight world ranked fighters, former world champions, or should a current world champion want to give me the opportunity to fight for a world title. Just bring it on; I’m fit and ready with my passport and waiting.

I’ve had to become realistic about the situation. I’m too good for my own good at the moment. I believe I’m going to have to work my way up to mandatory status, as I’m a difficult assignment for anyone. I am already seen as high risk, and relatively low reward.

Most British fighters get voluntary cracks at the world title because, just like our top footballers, it is well known that we will always give our all, but at the elite level, we lack that necessary technical ability. Therefore, we tend to see most world champions take over and dominate after the midway point.

We are definitely great TV, if not always great box office, as we always ‘lay it all on the line’, and tend to leave the ring ‘on our shields’.

Carl Froch, Amir Khan and David Haye are the current crop of British fighters who have shown they are capable of winning fights against world class opposition on foreign soil. So it is a real pleasure and honour to have that in common with them.

Now that I’m ranked 11th both by the WBC and IBF, 10th in the IBO rankings, I’m knocking on a world title challenge.

It has been a long hard road, but hard work makes the dream work.

Now back to that promise; Steve will give his all and it will make for an exciting fight, while it lasts. He won’t be the only knock out on May 19th in Liverpool.