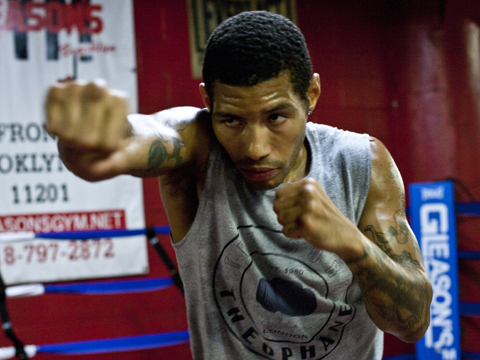 Different levels and different planets come to mind. It doesn’t matter how great a shape he gets in, my style and my experience are things that Steve Williams will just never, ever have at his disposal.

It is an honour and a privilege for him to share a ring with me. Just like it was for Jason Cook, Ben Murphy and Lenny Daws. I’m the best fighter they will ever face in their boxing careers. Steve, just enjoy the occasion of facing the best British 140lb fighter; the British light welterweight King, Ashley ‘Treasure’ Theophane.

As Floyd Mayweather has clearly stated regarding the result of his upcoming fight with Miguel Cotto. The same prediction applies to Steve Williams. He will go the same way that Miguel Cotto will go.

Steve Williams can go out in three ways in this fight; on his face, on his back or he can wave the ‘white flag’. The choice is his. There will be none of “And the New” on my watch. “And Still” is the only thing the announcer needs to practice on.

Jim Watt commented in the past that Steve Williams has tremendous strength. But, that alone cannot beat Ashley ‘Treasure’ Theophane.

Steve Williams won the first two rounds in his fight with my old victim Lenny Daws. Then Lenny bamboozled Steve with his skill and speed.

What am I going to do to Steve, then? I am faster and stronger than Lenny. I had Lenny ‘seeing stars’ in the ninth round. It will take a very gifted man to beat me, and for the avoidance of doubt, that is not Steve Williams.

He is a straight forward, ‘ABC’ boring fighter. I have the full alphabet in my arsenal. I can stand and fight or box and move. There is nothing I cannot do as a boxer. I rather not watch any footage of Steve Williams. His biggest fights have been against Michael Grant, Karl Place and Lenny Daws. His performance in all these fights was totally uninspiring.

I am training as if I am fighting the likes of Marcos Maidana. I need that extra motivation which I always lack when fighting domestic fighters. Those who know me well fully understand that this is not arrogance, but just a confident and obvious statement of the unavoidable facts.

I am in my usual great shape, both physically and mentally, I am feeling very good and looking forward to May 20th when I become the outright owner of the Lonsdale belt. Not many 140lbs fighters have achieved that feat.

You have to go back seventeen years to 1995, to find a 140lb British fighter, Ross Hale, who won four British light welterweight title fights back to back. Then another twelve years to 1983, when Clinton McKenzie achieved that feat.

I am truly doing something exceptional. What I am about to achieve has only been done twice over the last thirty years. I’m all about changing perceptions, and doing the things that others said could not be done.

British Greatness? I am going to go down in history as a dominant British champion. I have not chosen any one of my opponents during my reign. The promoters and the Boxing Board of Control have chosen who they think are the divisions best, and I have obliged them by knocking out those selected to face me.

Steve Williams will face monumental physical and mental challenges when he steps in the ring with me.

Since being ‘schooled’ by Lenny Daws back in July 2010, Williams has beaten Paul King, Airak Sachbajzan and Karl Place. I, on the other hand, have beaten IBF world number three, Delvin Rodriguez, in July 2010. I followed this with wins over Willie Thompson, British champion, Lenny Daws, former European champion Jason Cook, and Southern Area champion Ben Murphy. When Steve Williams was beating Michael Grant for the English title, I was fighting the now WBC world champion, Danny Garcia.

I rest my case. That says it all and comprehensively about this fight.

Steve knows he will lose our fight on May 19th. He basically is training for survival, and nothing more, as he cannot be that delusional to believe that he can win.

If I have my way, I will knock out Steve Williams on Saturday May 19th, and fight again during July in an International title fight.

Owning my Lonsdale belt is my current endeavour right now, but ‘make no mistake’, I seriously miss the international scene, and I expectantly look forward to fighting the world’s best again.

This week has seen me unfortunately have to turn down two opportunistic television interviews before my fight with Steve Williams. I am totally focused on ‘Operation Liverpool’ right now. There is no time to skip training sessions in order to boast about my abilities on television. I’ll be more than happy to accommodate all TV Interviews after I knock out Steve Williams.

I have predicted the right result in my last three British title fights, so please don’t doubt me when I say I will win by a stoppage on Saturday 19th May in my battle with Steve.

Jason Cook and Nigel Wright both accused Steve Williams of ducking them as they were both due to face him in British title eliminators. In the end they ended up due to face each other, but I stepped up, and said I would fight Jason and then Nigel.

I will always try and fight the best available.

I have completed 30 hours training this week, and I am weighing a cool 146lbs. I’m in phenomenal condition. Even, the ever observant, Don Charles, commented whilst he was pushing me through some training drills that he is “trying to find a weakness” in me. He will not stop searching, but there are none, and never will be.

As the great Jesse Owens once said, “we all have dreams. But in order to make dreams into reality, it takes an awful lot of determination, dedication, & discipline.”

I have lived by that eminently instructive observation all my professional life.

I was a lofty world number four, when I got the opportunity to fight the British champion, Lenny Daws. I took a calculated risk in coming back to the domestic scene, as I was already a world class fighter, on the verge of a world title shot. I believed in myself, in the British title and therefore the journey, and I am now at the last stage of my domestic mission.

No one will stop me from owning the Lonsdale belt outright. I have sacrificed way too much already. I am knocking Steve Williams out – period.

I’m way too focused on turning my big dreams turn into reality.