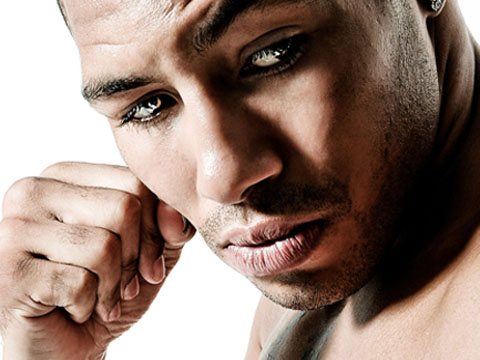 The International Boxing Organisation ranks me as the 8th best 140lb fighter in the world. Steve Williams doesn’t even make the top 100. That just about says it all.

In Britain, I am in competition all by myself. I’m pushing myself harder and harder each week. I want to be the best I can be. The WBC ranks me 12th, and the IBF has me at 11th.

I’m officially one of the best fighters in the world.

I am so proud to be the British champion. I had to take a tough decision to put my world ambitions on hold, but I’m glad that I did, as to own a Lonsdale belt outright is a fantastic achievement.

I am closing in on my destiny. I feel there is greatness within me. I have always believed in myself, even when it felt like I was the only one who did.

Carl Froch and Amir Khan are the only other Brits to have won over in the States, against world ranked fighters recently. I’m in very exclusive company.

Going to Liverpool will be a piece of cake.

Steve Williams’s team are making out as though I wanted to avoid Steve, which could not be further from the truth, as they will find out.

I do like Steve as a person, but I 100% know when we fight, he will lose. He has a 0% chance of winning. Fighters really should beware of mentioning my name, as when they actually get what they wished for; it is the most daunting of tasks at hand.

Steve and his team are confident of beating me on May 19th. Lenny Daws, who ‘schooled’ Steve Williams in their bout, thought he could outwork me, and then break me down. Instead, I did the breaking down. Jason Cook, who got a draw with Lenny, thought he could knock me out. I ended up knocking him out. Ben Murphy tried to push me back and outwork me, and in the end the referee stopped the fight when I put the heat on him.

Steve Williams and his team have a basic plan as you would expect. Push me back and hope to get a knock out win, or outpoint me. How naive are they?

They tell him that they know how I think, and “that you can knock Ashley out”. Nice try guys. I don’t know how they can come to that particular conclusion, especially as I’ve never been down.

He has never fought a world class fighter. Sparring with fighters in Manchester and Liverpool is a far cry from fighting me.

Only Steve’s friends, family and his coaching staff are actually foolish enough to believe he can win. In the end, they must avoid getting him hurt.

It will probably be a horror show on May 19th. I’ll enter the ring looking beautiful, and I’ll leave the ring with my same ‘pretty face’ intact.

Lenny Daws, Jason Cook and Ben Murphy were cut to shreds with my ‘pin point’ razor sharp shots. Steve will be blocking my punches with his face, as he has a basic defence, a basic plan to defeat me, and a basic coaching team training him.

You cannot buy experience and I have that in abundance.

Steve feels fighting in front of his fans in Liverpool will push him on to victory. Yes the crowd will push him, push him right into my punches.

I’ve fought in Germany, where British fighters never usually win. Only the great Welsh fighter and world champion, Joe Calzaghe, has won there in recent years. I’ve won two International titles there. I’ve won in America, against better fighters than Steve, where Amir Khan and Carl Froch have repeated my success, and to be honest, bettered it by being involved in world title fights.

The obvious point is I am in a league far, far away from Steve. I am going to incrementally break Steve’s heart. Increasing the pressure, accuracy and intensity, round by round, he will soon realise he is in a futile and losing battle.

There will be NO ‘upsets’ on my watch. I cause the upsets.

I have supporters coming from all over the country; Cardiff, Southampton, Manchester, London and even Steve’s hometown of Liverpool.

Against all the odds, I have had a successful career. Without a promoter and whilst being self-managed, I climbed to fourth in the world during 2010. I’ve beaten former World, European, Commonwealth, English and African champions, along with a British champion and a world ranked number three fighter.

I have a great team around me. I may be the figure head, the man who gets the glory, but there are many things going on behind the scenes that I do not need do get involved in. I thank every one of my Team, who are actively helping me scale the mountain to the very top.

My training staff does a great job in getting me in top shape for all my fights; Jihad Abdul Aziz, Harry Keit, Dave Brown and Don Charles, have all had a role in getting me into frightening shape. Everyone has a role in my team, and it will all add up to win number 32, and knockout number 10.

I have been working with Don Charles, alongside Dave Brown, since arriving from my eight week training camp in America and he is excited, and looking forward to May 19th.

He has seen my talent at close quarters and he believes I am a ‘special’ talent. He always comments that, “you were not supposed to get to where you have, as most people would have given up or failed. It is like you’ve won the lottery, as people do not achieve what you have achieved under such daunting circumstances. Going to America and beating their best fighters. It just doesn’t happen.”

I’ve completed 32 hours of training this week, and I am feeling great. The BBBoC inspector came to All Stars gym on Saturday to check that my weight was on target. He knows I am very professional and focused; he commented that my weight was perfect for three weeks to go.

I enjoyed a sixty minute massage at Nickel Spa in Holborn this week. Massage reduces recovery time, helps prepare for strenuous workouts, and eliminates subsequent pains for all athletes at any level.

Promising young fighter, Alex Dilmaghani, who was a sparring partner for Juan Manuel Marquez, for the last Manny Pacquiao fight in 2011, told me that “fighting domestic opposition is becoming a chore for you; Jason Cook was ‘cooking’, Lenny Daws was ‘hoovering’, Ben Murphy was ‘washing up’ and you’re about to finish ‘wiping up’ with Steve Williams”.

He obviously knows what he is talking about.

This week saw Mayweather Promotions offer me a fight on the ‘Ring Kings’ show in Las Vegas on May 5th, featuring Floyd Mayweather vs. Miguel Cotto, and Saul Alvarez vs. Shane Mosley. If it wasn’t for my upcoming title defence, I would have jumped at the offer, and it would have been part of the HBO televised part of the show.

Yet another necessary sacrifice.

I’ve recently spent part of my eight week training camp in America at Mayweather’s Gym, so the ‘Money’ team got to see me at very close quarters. It is a great opportunity, but the timing is just not right.

I spoke to Leonard Ellerbe and Cornelius Boza Edwards, whilst I was at the Mayweather Gym, about the possibility of featuring on a Mayweather Promotions card. I’m 100% sure it will happen in the future.

I was also offered a fight on the Mayweather vs. Ortiz undercard, back in September, so it is a great feeling to be respected and valued highly enough stateside, for consideration for such mega shows.

Floyd Mayweather fights are the showcase of world boxing at the moment, and to be twice requested to feature on his show speaks volumes about how the Americans feel about me as a fighter.

All my hard work and dedication has been worthwhile.

My current focus is on winning the Lonsdale belt outright on May 19th. My guess is that Steve Williams and his team would have wished that I would have taken the amazing opportunity of being on the Mayweather bill.

They are not that lucky.

Mayweather Promotions feel that I am worthy of being a Ring King, and they are indeed right. British Ring King – Ashley ‘Treasure’ Theophane.

May is all about winning my Lonsdale belt outright, and July is about getting back on the International scene.

World number 4, Delvin Rodriguez, who I beat in June 2010, is fighting WBA 154lb Champion, Austin Trout on June 2nd. This will be his second attempt at winning a world title. I am glad that my former opponents, Danny Garcia (now WBC world champion), and Delvin Rodriguez are doing well.

It just shows how good I really am.

Mayweather Promotions have added that extra fuel to my fire.

Tickets are selling fast and I’d love you to be there to support me.

Have a look at the May issue of Boxing Monthly, there is a great article taken from my diary of the two weeks I recently spent in training camp at the Mayweather Gym in Las Vegas.