SILENCE OF THE LAMB 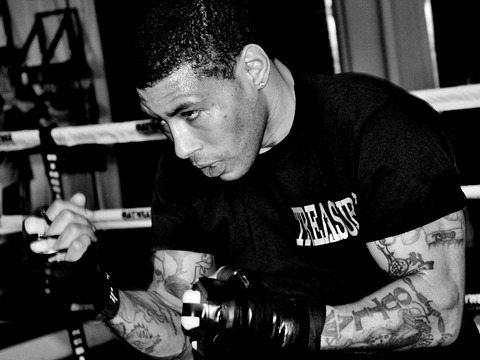 The final countdown begins to my third defence of the British light welterweight championship.

I’m very excited by the prospect of winning the Lonsdale belt outright.

Very few 140lb fighters have achieved that feat in the current era, only Junior Witter. That says it all about where I stand in British boxing as Junior Witter along with Ricky Hatton are the most successful 140lb fighters to have gone on from being British champion over the last twelve years.

I believe I can continue where they left off.

I’ve been world ranked for over twenty one month’s now by the various world boxing authorities.

Steve Williams will be walking into a minefield on May 19th, and his less than brilliant team will tell him to just keep walking forward, as I unleash my full weaponry on him.

Just take a look at my recent victims, Lenny Daws, Jason Cook and Ben Murphy, as they all lay badly beaten by me, bloodied and bruised!

I like Steve, and it saddens me that this will be how his challenge ends. He wanted this fight, so he chose this ending for himself.

It is not personal, just business.

I’ve beaten better men than Steve Williams. He is yet to fight a man of my talent. He is in trouble come May 19th.

Lenny Daws and Jason Cook were both confident going into their bout with me, but no preparation can get you ready for the real thing.

His own team will be his downfall.

I am in phenomenal condition right now. I am only sparring middleweights and junior middleweights. They campaign at fourteen to twenty pounds above my weight category.

I expect a knock out win on May 19th in Liverpool. Steve thinks he can set me an uncomfortable pace, but he needs to realise that Lenny Daws had a similar strategy and was left gasping for air in the championship rounds, and hanging on for dear life in our encounter.

Steve will be struggling when I get into my stride. He will give his all, but his all will not be anywhere near good enough come fight night.

Losing to Lenny Daws, struggling with Michael Grant, and knocking out Karl Place, is world’s away from fighting the IBO number 7, WBC number 12 and IBF number 11, Ashley Theophane.

You don’t get ranked so high for the fun of it. Many people believed I lost to world number three, Delvin Rodriguez, but as many people believed I beat current world WBC champion, Danny Garcia. I’ve demonstrated that I can mix it with the best world class operators, and on my day, I know I could beat IBF champion Lamont Peterson, WBA champion Marcos Maidana and WBC champion Danny Garcia.

When competing against the world’s best, all you can do is give your all.

Steve is a ‘flat footed’ robot, who telegraphs all his punches. You see them coming a mile away. It will be an easy night’s work. This fight is all about levels and he is far from mine.

The biggest night of Steve’s life is drawing closer. Will he sink or swim? Either way he will end up getting drowned, because I am too determined and I’ve worked too hard to get to where I am now.

Even the bookies around the United Kingdom agree with me. I am a 5-1 on favourite, and Steve Williams is a 4-1 against underdog.

I said I would stop Jason Cook and Ben Murphy, so when I say I will knock out Steve Williams. Believe me!

I’m not over confident and I’m not arrogant, I just believe in my ability.

Congratulations to my former victim, Ben Murphy, who defended his Southern Area title last weekend, stopping Phil Gill in one round in their encounter.

I’ve taken on all the hard and tough challenges as British champion. I’ve just made it look easy.

I’ve never chosen any of my opponents. Mick Hennessey chose Jason Cook, and when Nigel Wright failed a brain scan, I could have pulled out of the fight, but I told Frank Maloney to get me any one, and Ben Murphy was the only fighter willing to accept the challenge at such short notice.

Next up is my mandatory defence. Nothing has been given to me in my boxing career, but it makes my wins and my success all the more sweet.

There is a big difference between world level and British level, as Paul found out over the weekend. DeMarcus has seen better days, but still had too much for Paul.

So obviously, he was rightly the favourite. Since I beat him, he has lost ten fights, and going into his fight with McCloskey, he had only won one of his last seven fights. But he had just beaten Gabriel Bracero, who was ranked 16th in the WBC, so that fight got DeMarcus ranked again.

I expected Paul to win, as DeMarcus has seen better days, but being a world class operator for so many years was more than enough for DeMarcus on the night.

I am happy for ‘Chop Chop’ Corley, as he was my breakthrough fight on the world scene, and got me taken seriously Stateside, as he is well respected over there.

So Danny Garcia is currently world champion. Delvin Rodriguez is WBA junior middleweight number four, and fighting for a world title on June 2nd, and DeMarcus Corley will now probably be jumped into the world top ten again.

I’ve clearly demonstrated that I can mix it with the world’s best. The better the fighter, the better I perform.

I’ve been going through the ‘motions’ as British champion. I’m just focused on getting back to the world scene after I knock out Steve Williams.

This week saw Golden Boy Promotions offer me just under one hundred thousand dollars to fight in the Ukraine in a WBA sanctioned title fight on June 2nd.

It takes a strong minded and determined man to turn down both those opportunities, but securing my legacy in British boxing is my top priority right now.

I was asked last year to feature on the Mayweather v Ortiz show, and I’m confident I will be asked again. I believe in my talent that much.

Big fights are back on the horizon, after I knock out Steve Williams.

Floyd Mayweather put on a great performance against Miguel Cotto on Saturday at the MGM Grand in Las Vegas. Floyd showed a bit of everything; boxing skills, ring general-ship, toe to toe, not to mention heart and a good chin.

Miguel Cotto fought his heart out, but Floyd was just better at everything.

Just like my fight with Steve Williams; he will fight his heart out, but I am better at everything than him.

Floyd Mayweather and Miguel Cotto are two of my favourite fighters over the last ten years.

Floyd Mayweather can end his career with wins over Sergio Martinez and Saul Alvarez. He is a living legend, and he deserves to be better appreciated for the huge talent he really is.

Watching Floyd train and spar at his Mayweather Gym was both inspiring and motivating. I am glad I had the chance to witness his greatness in the flesh. I will definitely go back there. Team Mayweather have left the door open to me, so I would be a fool not to accept.

The world is my oyster, and the future holds some blockbuster fights for me in America.

With less than two weeks to go to my title defence tickets are selling fast and I’d love you to be there to support me.

Have a look at the May issue of Boxing Monthly, there is a great article ‘Life with a Legend’, taken from my diary of the two weeks I recently spent in training camp at the Mayweather Gym in Las Vegas.