STANDING IN MY WAY 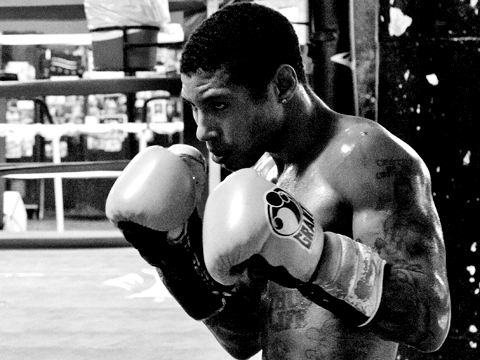 When I enter the ring with Steve Williams on Saturday I will be ranked 7th best 140lb fighter in the world by the IBO. It is a great feeling to be recognised in the world of boxing by my fellow fighters and the organisations overseeing it.

All the hard work and dedication has been worthwhile.

To be ‘King of Britain’ is also a remarkable achievement, something I have achieved against all the odds. I am a very proud British champion and I will defend my crown with all I have.

Another thorough and comprehensive week of training; where I’ve focused on flexibility, strength, agility, recovery and nutrition. These are the things that all top athletes work on.

Many boxers struggle with their weight loss. Not me!

I am very professional when it comes to dropping weight. I eat on average 3000 calories a day, and drop 2lbs a week.

I use High5, NRG Fuel and Vitabiotics. They help me push my body to its limit. I use Swelter wear during my cardiovascular sessions, and they help me to drop those extra pounds. If you know what you are doing with sports and nutrition, it becomes so much easier!

When I’m in top condition I just don’t get tired. I am always calm and relaxed during a fight, no matter how fast the pace is. I am a true professional.

As world WBC number nine, DeMarcus Corley, who I beat four long years ago, showed recently in Belfast, there is a huge gap between British, European and World level.

Steve is about to experience this first hand.

Another former victim of mine, 154lb WBA world number four, Delvin Rodriguez, is fighting for the WBA junior middleweight title in a couple weeks.

My last loss was over two years ago to Danny Garcia, who many thought I beat. Amir Khan is looking to fight him on July 7th.

Golden Boy Promotions have offered me two lucrative pay days in the last few weeks. The world’s top promoters respect my game. I’ve even been invited back to the Mayweather Gym in Las Vegas, as I impressed in my training stint there.

Many fight fans have noticed that I am a total different fighter as British champion, than I was as IBO International champion and IBF world number four back in 2010.

I’m not disrespecting Lenny Daws, Jason Cook or Ben Murphy; they are all good British level fighters. I am just a world level fighter. I haven’t had to get out of third gear to beat them, and no matter how great a shape Steve gets himself in, he is not a better fighter than Jason Cook or Lenny Daws. He doesn’t have the fitness of Lenny, or the ‘one punch’ power of Jason. They were slight threats. Steve is zero threat.

I’m going to turn Steve Williams’s dreams into his nightmare. I beat him up in his gym in Liverpool, so it will be deja vu for Steve, just this time there will be no games.

It is time for business.

Steve Williams will be an easy night’s work for me. How are you going to be sparring basic fighters, when you are challenging a ‘3D’ champion?

I’ll only be happy with a knock out win, for me anything else will feel like failure.

Steve will be like a dart board with me hitting ‘bulls eyes’ all night. He is a walking target with no defence at all.

Steve Williams will be a punch bag, and his British title hopes will be over, on 19th May.

Steve is obviously excited, and looking forward to fighting me. Why would he? I have fought all over the world against some great fighters. Who has Steve faced or beaten? Absolutely no one. Steve Williams has been ‘breast fed’ his whole career. Beating and struggling with nobodies.

After I beat Steve I plan to go back on the world scene and fight the likes of DeMarcus Corley, Danny Garcia and Delvin Rodriguez again.

Fighting these world class opponents is what I enjoy and crave.

Steve Williams can’t outbox me or outfight me. I’m better than him at everything, and he will find out come fight night. Train as hard as you want. I’ve forgotten more than Steve Williams or his team will ever know.

I find it amusing that Steve and his team actually believe they can beat me. That’s like San Marino beating Brazil in a football game. It is never going to happen. It is laughable in fact.

As Jim Watt stated about Steve Williams in his loss to Lenny Daws, “Steve Williams has no head movement, no defence and no answer to the jab. He has tremendous courage, but you need more than that to win titles.”

My sentiments entirely; Steve Williams is a basic ‘ABC’ boxer. We could fight ten times, and he would lose ten times.

I’m looking to send Steve into early retirement. How many chances do you want to win the British title? If you are not good enough to beat Lenny Daws, you certainly can’t beat me. Lenny bullied Steve in their encounter.

He knows deep down in his heart he faces mission impossible against me. He looked terrible against Karl Place in a fight that he won to get the British Boxing Board of Control to make him my number one contender. He was slow, clumsy and predictable.

Saturday 19th May will be the easiest British title fight that I will ever have.

Over the last four weeks I’ve completed on average thirty hours a week of training. As the pound for pound king, Floyd Mayweather says, “Hard Work and Dedication”.

I have made a massive sacrifice to be British champion.

How many fighters would turn down world title eliminators, and fights in Las Vegas, just because they want to own a Lonsdale belt – very few, if any.

Steve and his very ordinary team are obviously training hard and want to beat me, but ‘skills pay the bills’ and Steve has zero skills. He will be my punch bag for the night. An easy night’s work. I am going to walk through Steve Williams and knock him out. I said I would stop Ben Murphy and Jason Cook. We know the result of those.

Steve Williams’s conqueror was my victim. I had Lenny ‘dancing with the stars’ when we fought, and Steve will be seeing those same stars come May 19th.