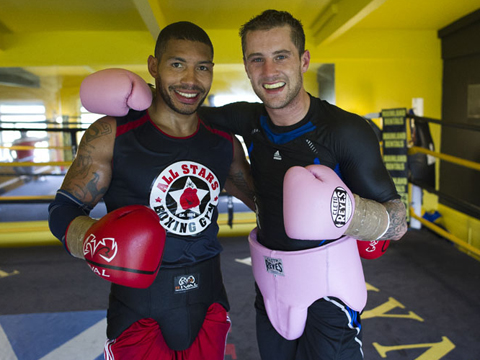 What a fabulous time I’ve had up in Glasgow sparring with two weight WBO world champion, Ricky Burns. He is one of Scotland’s finest fighters and I’ve had the honour and privilege of working with him.

Ken Buchanan and Jim Watt are seen as Scottish boxing greats and Ricky is set to join that special group of fighters.

I got my 32nd professional win in North Carolina on a ‘World of champions’ promotion on Friday 24th August, and by Monday 27th August, I was in Glasgow trading blows with Ricky Burns.

To say I am dedicated is an understatement.

Ricky has a reputation of going through sparring partners. Many only last a couple days. Obviously I’m made of sterner stuff, and have sparred some of the best fighters in the world on both sides of the Atlantic.

My quality services were needed over two weeks. Ricky and I had competitive sparring, and even though Ricky wants the fight to happen now. He will be ready when the bell sounds in just over a week.

Kevin Mitchell has beaten Breidis Prescott and John Murray. Michael Katsidis made easy work of Kevin, whereas Ricky out boxed and out worked him for twelve rounds.

Kevin’s record on the world scene doesn’t compare to Ricky Burns. Ricky wanted the best sparring possible and that is why I was hired.

I always thought that Ricky would win through a point’s decision, but I would not be shocked if he stopped Kevin.

In British dust ups, sometimes you have to throw out the form book, especially when it comes to a Scottish versus English battle. Absolutely anything can happen.

I would love to see Ricky Burns vs Adrian Broner. That would be a great fight. They are on a collision course.

I completed 48 intensive rounds, over 6 sessions with Ricky and I loved every minute of it.

I’m closing in on my 40th professional fight and I’ve run out of British fighters to face. In 38 fights I’ve only dropped a decision to one British fighter, and that was just about as dubious as it gets.

Amir Khan and Lenny Daws are the only attractive fights for me in the British 140lb division. Amir and I have a mutual opponent in Garcia. Lenny and I had a great battle in 2010 which saw me triumphant.

Lenny is due to fight for the European Union title, and if he were to win, which he should, I would be interested in giving him a rematch.

Amir and I seem destined to fight as we are the top two 140lb fighters in Britain.

Ricky Hatton is back!

Ricky Hatton has had a great career, only losing to the best of our generation; Floyd Mayweather Junior and Manny Pacquiao.

He has made a small fortune and never needs to fight again. Obviously a fire still burns inside him, and he needs to come back for himself. It is his career, his life and his choice whether to step into those ropes again. I feel he still has more in him.

Sometimes we have to please ourselves, rather than what our friends and family want us to do. Ricky will still draw the crowds he used to.

David Haye, Amir Khan and Carl Froch haven’t gripped the public’s imagination like Ricky did. I look forward to being on the Hitman’s undercard at the Manchester Arena.

I was lucky enough to be at ringside when Ricky beat Kostya Tyszu. I was a ten fight professional, and Ricky was the number one British 140lb fighter at the time. So I bought ringside tickets and took my girlfriend to Manchester for the weekend. I also wanted to be in those big fights, so to soak up the atmosphere was worth every penny.

Ricky put on an amazing display that night, showing grit and determination.

Seven years later, who would think I would be signed to Ricky Hatton’s promotional company.

November 24th at the Manchester Arena will be an amazing event and to be on that show would be something special and inspiring.