IN THE COMPANY OF MEN 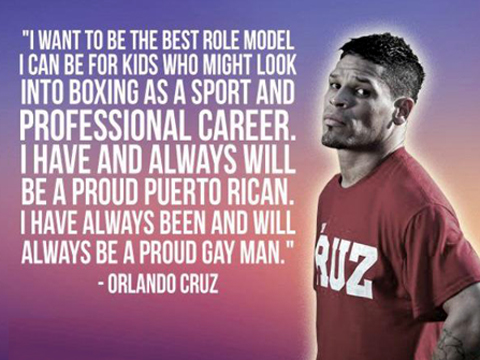 Homosexuality in the Black community is still a big taboo, and even more so, and probably worse in boxing.

World class Puerto Rican fighter, Orlando Cruz, came out of the closet and let the world know, that he is a proud gay man.

He is a former Olympic boxer, and one of the top-ranked fighters in the world, he has made history by becoming the first openly gay man in the most macho of sports.

Orlando said through a press release that, “I’ve been fighting for more than 24 years and as I continue my ascendant career, I want to be true to myself. I want to try to be the best role model I can be for kids who might look into boxing as a sport, and a professional career. I have and will always be a proud Puerto Rican. I have always been and always will be a proud gay man.”

Miguel Cotto praised Orlando for coming out during a radio interview in Puerto Rico. Miguel, a three weight world champion whose last fight was against Floyd Mayweather and his next fight will be against Austin Trout at Madison Square Garden said, “Orlandlito and I spent many years on the PR team together. We went to the Central American games, Pan American games, World Championships and the Olympics together. I have great appreciation for Orlandlito. I congratulate him”.

On reading both press releases, I felt proud of both Orlando and Miguel, for making the stand and supporting his friend respectively. I for one do not care what ‘floats his boat’, but I have had many boxers in London comment that they would be uncomfortable fighting or training with a gay boxer.

There have been rumours for many years that one of the biggest names in British boxing is homosexual. I’ve known him since we were teenagers, and if he is homosexual or bisexual, and if he chooses to come out or not, it is up to him. Either way, I will always be his friend.

He was found having hung himself. No British professional footballer has dared come out since!

Football is another ‘macho man’ sport, but I am sure homosexual men are playing top flight professional football in this country. Justin’s story has unfortunately become the worst of cautionary tales. No one wants to go through that level of vilification and rejection.

Football crowds can be merciless. It will take a very strong and principled man to come out in football again, but times are a changing, and fast. We live in different times now, I am pretty sure that sooner rather than later, some will break out from the understandable safety of the code of silence.

I know female amateur and professional boxers in London and New York who are lesbians, but maybe that is not seen as much of a threat, unlike in the all too aggressive and confrontational male world of boxing.

There are also many openly lesbian professional footballers in Britain.

This seems to be a particular male dilemma; in my experience females tend not to care what a person’s sexuality is, as having a homosexual friend seems to be just about normal for most women nowadays.

Whilst studying at college in London and again whilst training at the Gleason’s gym in New York City, I’ve had male admirers. I take it as a real compliment that both sexes find me attractive – it’s healthy to be liked, and even healthier to be positive about life.

The Black community in general have real worrying issues around homosexuality. There is a lack of awareness and understanding about just how damaging homophobia really is. The irony is that a set of people, who have suffered so much from bigotry by the ill-informed, can be so damning and dismissive of those who are just different.

Reggae artists like Buju Banton have had massive hits centred on homophobic lyrics and propaganda that do no favours to anyone, and have rightly not been aired on mainstream radio in this country. However, many still buy and download this unforgiving propaganda about homosexuals.

Far too many good and free thinkers have remained silent for far too long now.

Whilst many schools now mark and celebrate Black History month in October every year (which by the way, should be scrapped as it’s high time that black history should be part and parcel of the regular school curriculum), it might be timely to mark homosexuality in a similar fashion.

I strongly feel that schools should make an assertive attempt to increase awareness and education around tolerance and understanding of homosexuality.

The 2001 UK census informed us that 2% of the UK’s population is Black and that 1.5% of the population is homosexual, but my guess is more people are ‘honest’ about being Black than those are about being gay. OK, OK, it might be just that little more difficult to cover up – I hear you say. My guess is that the current number of homosexuals might be much more than double that admitted to in 2001. Gays form a significant and positive part of the rich tapestry that is UK and I for one hugely welcome that.

High school tends to open our eyes to differences and our rich and varied world, and we are increasingly taught to ‘value that difference’, not to fear or oppose it.

Many children now have ‘same sex’ parents and this is on the increase and no longer the taboo it used to be.

Even the Church of England’s search for a new leader is having homosexuality as a key debate in selecting the new Archbishop of Canterbury. One of the favourites is Black, but disappointingly has rather negative views on homosexuality.

In New York City there is a big and visible gay community, and the annual gay pride parade in Manhattan is an extravaganza that heterosexuals also participate in and enjoy.

Richard Lane, a spokesman for Stonewall commented on Orlando’s coming out that “it is vital that there are positive role models in sport for lesbian, gay and bisexual people. This can only be a good step forward for fans of boxing and other sports.”

Aris Pina, a boxing historian, thinks that it is a positive thing for the Latino community; “it takes a lot of courage to announce you’re a proud openly gay Puerto Rican man, especially within the Latin community where men are very masculine, and within the homophobic world of boxing,” he told Fox News.

I know many Dominicans and Puerto Ricans from my time in training camp in New York City. Many of them have been supportive towards Orlando. Maybe times are actually changing for the better.

Welsh Rugby legend Gareth Thomas, who became the first openly gay professional rugby union player in 2009, is happy to see another sportsman announce that he is “a proud gay man”. He said “the bravery he has shown sets a great example to others. It’s great to see someone else doing it. I do believe we are coming to a point where professional sports people need not be afraid anymore.”

I tend to agree with Gareth. In this day and age we have businessmen, actors, comedians, politicians, reality and pop stars that are openly gay, and still loved and adored by the masses. Everyone needs to be inspired, and these stars coming out can help the kids who are petrified to say they are gay.

This is the 21st century, everyone should be proud of whom and what they are, and we as the human race should be supporting them and all who are different from us.

This is not new to boxing, the great Emile Griffith; the three weight world champion was the first openly recognised homosexual fighter.

I’ve met him a couple of times at Gleason’s gym in New York and the Wildcard gym in Los Angeles.

In 1992, Griffith was viciously beaten and almost killed on a New York City street, after leaving a gay bar near the Port Authority Bus Terminal. He was in hospital for four months after the assault. It was not proven whether the violence was motivated by hatred of gays, but still hugely worrying and perhaps instructive to those boxers who are gay.

Griffith was quoted in Sports Illustrated as saying “I like men and women both. But I don’t like that word: homosexual, gay or faggot. I don’t know what I am. I love men and women the same, but if you ask me which is better… I like women.”

Orlando Cruz we salute you and long may you continue to be a role model and inspiration to many.

“There are many ways of going forward, but only one way of standing still.” – Franklin D. Roosevelt