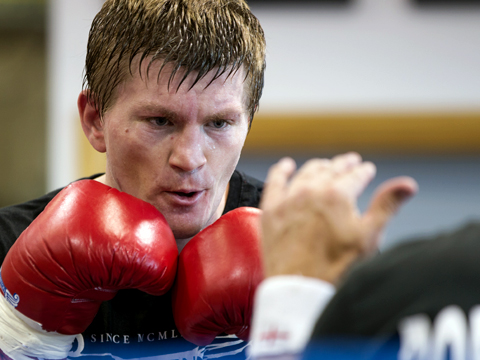 The Ricky “The Hitman” Hatton show is back in town, and it is a real pleasure to be part of such a great show.

Ricky has fought two of the best ‘pound for pound’ fighters in our generation in Floyd Mayweather and Manny Pacquiao. I’ve had the pleasure of seeing both train very hard at Mayweather’s Boxing Gym in Las Vegas, and the Wildcard Gym in Los Angeles respectively.

19,000 fans bought tickets within three days of them going on sale, without the opponent yet being named – unprecedented. The event is ‘sold out’ and Hatton Promotions have put together a great show.

Ricky is still by far the greatest draw in British boxing.

The bill has fighters like world title challengers Martin Murray and Rendall Monroe, British champion Scott Quigg; Gary Buckland will be defending his British title against Steve Foster. Sergey Rabchenko will be defending his European title and ‘yours truly’ will be opening up the show for the headliners. This show is worth every penny of the PPV.

My last fight was in North Carolina on 24th August where I won on points over eight rounds. I also spent two weeks in Scotland with world champion, Ricky Burns as he prepared for his “Battle of Britain” bout with Kevin Mitchell. We completed 48 competitive rounds which was quality work for the both of us.

Training at the All Stars boxing gym has been hard and intense, just how I like it.

Dave Brown, who has guided two fighters over the last three years to ABA National titles, has overseen my preparations. He has played a significant part in my wins over Delvin Rodriguez, Lenny Daws and Jason Cook, and as is always the case, I’m in great shape.

My US trainer, Jihad Abdul-Aziz from Gleason’s Gym in New York City is flying to Manchester to oversee my corner, and make sure we get the stunning win which will end my year on a high.

The best cut man in the business, Mick Williamson, will also be in my corner on the night. He really pulled it out to stop the bleeding on one of the worse cuts I’d seen in a long time on Tony Bellew last weekend. I’m in the safest of hands!

Jihad commented this week “He (Chris Truman) doesn’t have a clue! I know you are in shape! We will dictate the pace and win every round. You have to show these people you are a world class fighter. We will make some noise that night.”

I did an interview with Sports Night Live on Primetime TV this week. Primetime TV will be televising my fight. Tim Witherspoon, who was a guest on the show, said he loves how I dissect my opponents and that he hasn’t seen many British fighters as calm and as relaxed as I am in the ring.

That is a great compliment from a former heavyweight champion of the world.

Come Saturday, I will get my 10th knockout win. Watch this space!