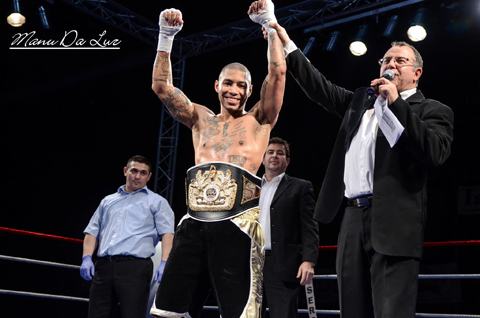 2012 has been a fantastic year overall.

I started the year as British champion, and ended it with the GBC championship belt around my waist.

I had an excellent two month training camp in America, which saw me training at Gleason’s Gym in New York City and Mayweather’s Gym in Las Vegas.

It was amazing to watch Floyd Mayweather in his preparation for his bout with Miguel Cotto. I was even offered a slot on the show in Las Vegas.

In the space of few weeks in May, I was offered an IBF world title eliminator against Josesito Lopez and a 100,000 dollar fight with current WBA and IBO world champion, Khabib Allakhverdiev in Russia. Unfortunately I had obligations as British champion so I couldn’t take the offers as I would have been stripped of the title.

I fought in North Carolina in America on August 24th, where President Obama had the Democratic convention a week later. It was great to be back fighting in the States, as the last time I had fought there was when I beat two time world title challenger Delvin Rodriguez.

Straight after the fight I flew from North Carolina to Glasgow, to assist two time world WBO (World Boxing Organisation) champion Ricky Burns, prepare for his world title fight with Kevin Mitchell. Ricky won by a knock out. His team are in talks for a 2013 fight with fellow lightweight world champion Adrien Broner. I hope it happens as I’ll be flying with Team Burns as they prepare to shock the world.

I finished off my year with a victory in Luxembourg. Recapturing the GBC (Global Boxing Council) welterweight title I won six years ago.

I finished 2012 with a record of 33 wins, 1 draw and 5 losses. My career target is 50 wins, and to add as many titles/championships as possible.

I am well into my journey and on target to achieve my endeavour.

I have been training at All Stars Boxing club since 1988 and it was a pleasure to see the founder Mr Isola Akay walk with the Olympic torch through Notting Hill Gate in London for the build-up to the Olympic Games. He was awarded an MBE ten years ago for his services to the community. He has inspired me on my own quest to be awarded an MBE from the Monarchy, one day be it for services to sport, charity and the community.

Throughout the summer I worked on BoxNation television as a pundit with the best in the business; Steve Bunce, Steve Lillis, Ronnie McIntosh and Jim Rosenthal. It was a great experience and I’m looking forward to doing more of that in 2013.

My role as ambassador for Ted Baker, HIGH5 and NRG Fuel blossomed this year, and the Wellman advertising campaign which I featured in was in well over 100 leading magazines and newspapers from June to December.

The media campaign in 2013 will be even more fantastic. I will also be featuring on Colorblind greeting cards for their 2013 collection, which can be bought in Hallmark and Clinton Cards.

I’m so looking forward to 2013 as it looks like being a fabulous year on all fronts.

I’m lucky to be part of a phenomenal team. I would like to thank René, Penny, Jackie, Jakub and Dominic for all their great work and also my coaching team Dave Brown, Harry Keitt and Jihad Abdul-Aziz. I cannot thank you all enough, but your work is always appreciated.

I wish all of you a successful and prosperous 2013. Our world is changing yet again and things can only get better.

“Do not go where the path may lead, go instead where there is no path and leave a trail.” – Ralph Waldo Emerson