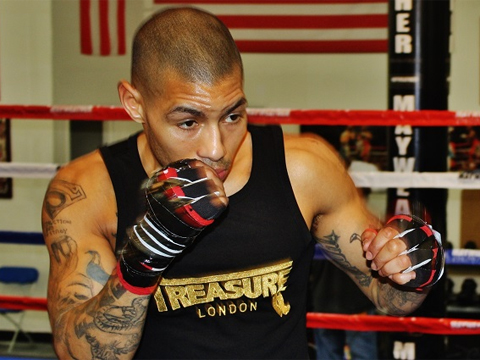 This has been another great week at the Mayweather Boxing Club in Las Vegas. I continued my work with Floyd’s assistant trainer Nate Jones and I also worked with Roger Mayweather.

CBS – Showtime who Floyd has just signed a six fight deal, started filming him for the build-up to his fight with Robert ‘The Ghost’ Guerrero.

Some of these were private sessions where only The Money Team or sparring partners of Floyd could watch. I had the privilege of being able to stay and watch Floyd go through his training regime.

It is always instructive and inspiring!

This week I had the pleasure of accompanying Floyd on his evening road running sessions. Being side by side with greatness is something that can only fuel you to achieve your goals.

Floyd invited me to the Alicia Keys concert at the Mandalay Bay hotel resort and casino with The Money Team on Friday. I had a great night out with them.

They have made me feel continuously welcome and very much at home.

Vegas is the place to be! Adrien Broner is due to fight world champion, Paul Malignaggi, in June and is considering basing himself in Las Vegas. Paulie has come a very long way since we first sparred in 2005.

I sparred with the talented Semajay Thomas again this week. It was his final week of sparring before his professional debut. He was a successful amateur being ranked US number one and world number five at the highest points of his amateur career.

He has already sparred two weight world champions Devon Alexander and Adrien Broner. As long as he stays focused and keeps working hard, I expect him to be a world champion. Remember where you heard it first.

I also traded punches with world rated Vernon Paris in sparring, which was decent work.

Next week I’m due to spar two weight world champion Cellestino Caballero. He is a great fighter and I’m looking forward to it.