THE AUDACITY OF HOPE 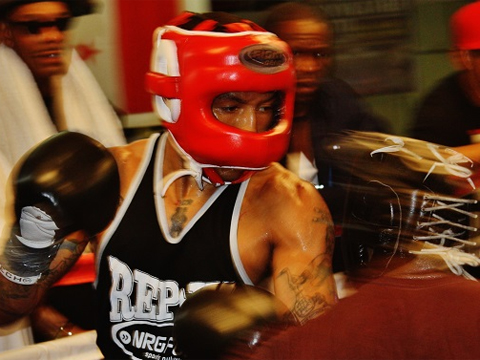 I sparred the Money team’s Mickey Bey on Monday and Wednesday. Mickey will be in one of the preliminary bouts before Floyd ‘Money’ Mayweather’s fight against Robert ‘The Ghost’ Guerrero on May 4th at the MGM Hotel and Casino, here in Las Vegas.

We battled it out through five minute full action rounds. It was great work. Floyd Mayweather Senior is Mickey’s coach, so he was barking orders at his fighter whilst Nate Jones was doing his job with me.

Every sparring session is extremely competitive. You can only learn from each of these sessions. Every day, my aim is to be better than the day before.

Two weight world champion Celestino Caballero, fights this Saturday in a WBC Silver championship. It was a pleasure to spar with him exclusively over three weeks. He thanked me for helping him, and said he’d bring back the ‘W’ mainly due to the hard sparring I gave him. He hopes we’ll continue sparring in the future. I really hope so too!

Some of my sparring sessions at the Mayweather Boxing Club have been ‘finger licking good’. I have won the respect of the fighters and the trainers at the gym. That means a lot to me, as I continue walking that path I visioned for myself as a five year old kid. Nobody said it would be easy, but believe me, it sure is worth it.

I spoke with Jean and told him I knew he would become a world champion when I saw him in the Commonwealth Games years ago in Manchester. He thanked me and said that they tried to rob him against the local English fighter. He was obviously too good, as he came away with the gold medal.

Floyd gave me a lift home in his white Ferrari, which was very kind of him. The media like to portray a negative side to him, but he is a kind, generous and giving person, who employs many of his family and friends.

As Luis Arias, one of his fighters said on his showtime interview I watched being filmed in the gym, “Floyd changes many people’s lives every day”. Floyd does many kind acts that never get mentioned by the media, but people around him or those who have come into contact with him get to witness it.

On Wednesday, Showtime’s ‘All Access’ which follows both fighters through their training and personal life leading up to the fight, premiered. It was very entertaining! I watched it at the Mayweather Boxing Club with the rest of the guys.

Larry King was at the gym on Thursday, and he interviewed Floyd for a TV special. Floyd came across really well. The interview was authentic, enlightening and funny. I like Floyd’s positive view on life. He likes to focus on the positive, just like myself. It was a pleasure to watch the filming of it with the Money team and Floyd’s friends and family.

Nate Jones trains Floyd Mayweather along with Roger Mayweather, and was on the same Olympic team as Floyd back in 1996. He told me a story about Floyd during the week. Floyd told all his Olympic team mates back in 1996 that he would go on to be an all-time great, and be undefeated as a professional boxer. Floyd believed in himself even back then, and he has made his dreams a reality.

I firmly believe that any successful person should try to give back, and inspire the next generation coming up behind them. Everybody needs a positive role model.

One day, I want to look back and know that I helped some people on the way up, achieve their dreams. Floyd Mayweather did that brilliantly with Ishe Smith. He believed in him and went out of his way to get him a world title shot. The rest is boxing history!

If being successful was easy, everyone would be. It takes hard work, dedication, perseverance, resilience and you have to believe in yourself, especially when no one else does.

We all have dreams of becoming the person we wish to be, but it’s tough, and without putting in the required work, we will never get there.

I’ve learned that constantly fuelling hope is a lot harder than allowing despondency to take over, but it’s so much more fulfilling.