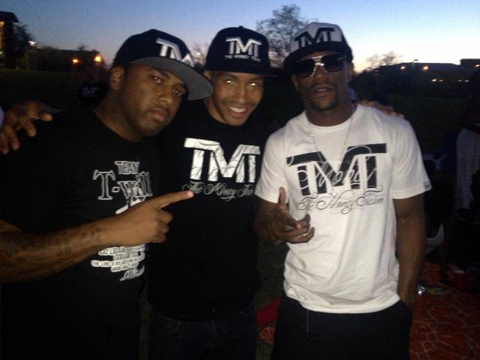 Floyd Mayweather has been on fire this week. He is peaking at just the right time and looking incredible in the gym.

I’ve had the pleasure and privilege of watching the last eight weeks of his training camp. I’ve seen first-hand how the number one athlete in sport goes about his business. He’s very special indeed. Watching him at such close quarters has made me push even harder in my own workouts, and it has added a few more weapons to my own growing arsenal.

On Monday, I got news that Mickey Bey, who I’d been sparring for two weeks, would not now be part of the Floyd Mayweather v Robert Guerrero show.

I took a chance and asked Floyd if I could take his place, as I’m fit and ready to go. Floyd said yes, and got the CEO of Mayweather Promotions, Leonard Ellerbe on the case.

Jose Hernandez was fighting Mickey Bey at 135lbs. I asked for 140lbs, but Jose was unwilling to fight me above 138lbs. So unfortunately, it wasn’t meant to be, but just getting the approval from Floyd himself, that I could be part of the biggest boxing show in the world means a huge amount to me.

I’ve been sparring with everyone and anyone around my weight division in the gym, and I’ve more than held my own. I’ve also been running up the mountains with ‘The Money Team’ fighters, and through the weeks I’ve ran with the man himself, Floyd Mayweather. Everyone knows I’m a very hard worker.

‘The Money Team’ has made me feel like one of the gang, which in itself has made my training camp even better than the high hopes I arrived with.

On Sunday, Floyd had a BBQ. I was invited along with ‘The Money Team’, his friends and family. We had a fun time. It’s good to take time out after putting in such hard work throughout the week. Floyd even took a moment out to sit the boxers down, and give us some great advice and insights on the business of boxing and what it takes to be a championship fighter. It was an unforgettable experience.

I was asked to spar London 2012, US Olympian Errol Spence Jr. by former world champion, Cornelius Boza Edwards on Saturday. I was only too happy to oblige, as I’d witnessed the great sessions Errol had had with Floyd over the last few weeks. Errol has been chief sparring partner to Floyd Mayweather for this camp. Errol and I had some very competitive sparring.

Floyd thinks he will be a world champion one day and I tend to agree. Errol has also worked with two weight world champion Adrien Broner, so you know he is rightly highly regarded in the boxing world.

Nate Jones has been working with me on all aspects of my game and he’s happy that it’s all coming together nicely. Nate makes up the three man coaching team of Floyd Mayweather, along with Floyd Senior and Roger Mayweather. I’m in very good and capable hands!

Nate said to me this week “you’ll owe me a million dollars soon with all the ingredients I’m adding into you.”

Week in week out, I’ve sparred the best that Mayweather Boxing Club has to offer. Fighters from all over the world; all established and respected. Over the eight weeks I’ve sparred Vernon Paris, Shawn Porter, Cestino Caberllo, Dangerous Don Moore, Semajay Thomas, Mickey Bey and now Errol Spence Jr.

You just can’t get this calibre of fighters at any gym in Great Britain. I thrive and shine against the best quality fighters, as everyone at Mayweather Boxing Club has witnessed with their own eyes.

This has been one of the hardest training camps I’ve had in my ten year professional career, but it has been one that I’ve learnt so much from. I’ve also had fun and met some great people who I can now call my friends. As Floyd said “It’s not only about being a hard working fighter, you have to be a smart fighter.”

I am in great shape and I am ready to fight on Miranda Carter’s Left Jab Promotions show on Saturday 18th May, at the Civic Hall in Essex. Tickets can be bought HERE

It will be my 40th fight, and it will mark my 10 years in professional boxing. It will be a night of celebration, and I will be in majestic form.