YOU ARE YOUR FRIENDS 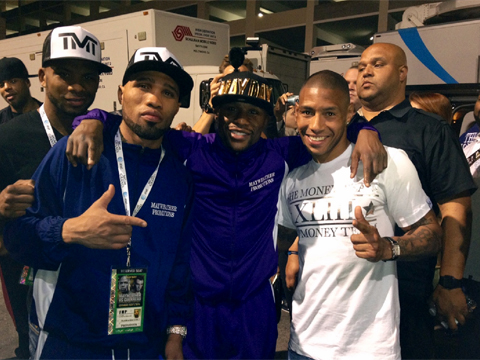 Over nine unforgettable weeks spent at the unique Mayweather Boxing Club in Las Vegas. I’ve had an incredible time. It has been without doubt, the best training camp I’ve ever had in America.

I had intensive but very entertaining sparring with all these talented fighters.

I am now more than ready for my fight on Miranda Carter’s Left Jab Promotions show next Saturday 18th May at the Greys Civic Centre in Essex. It will be my 40th fight and 34th win. You can buy tickets HERE

There are many great memories of this trip; I was invited to the Alicia Keys concert by Floyd. I even got a lift home one night in his white Ferrari. I also watched his Larry King interview being filmed with the rest of his team.

Hanging out with The Money Team was a brilliant experience; they are a great bunch of guys. Ishe Smith’s BBQ for the Vegas community was a wonderful gesture and a worthwhile cause. A true champion giving back to his people.

This week was the biggest week in the world of boxing this year. ‘May Day’ was finally here. The number one athlete in the world of sport, Floyd ‘Money’ Mayweather was the focus in Las Vegas and all around the world.
I started the week with a telephone interview with Steve Bunce from BoxNation TV it was quite a change from being in the studio with him. Steve was very interested in how Floyd’s training camp had been, and I hope I was able to share some of the excitement and professionalism that he brings to his workouts.

Leonard Ellerbe had given an interview earlier and had mentioned that Floyd wanted to do a show in the UK. Floyd had also told me the same thing, so there is a ring of truth about it. Floyd loves his UK fans!

This was a busy week for Floyd. He started the week by jetting off to Los Angeles on Monday for an interview. Tuesday was the fighter arrivals; the boxers on the card came to the MGM hotel in order for the fans to take photos. They follow the photo call by doing a few interviews for the media. Wednesday was the press conference, followed by some of the undercard fighters doing a media workout. Friday was the weigh in, which was unbelievably attended by some 8,000 fight fans.

Later on Floyd did boxing workouts at the gym to get his body adjusted to fighting in the evening. Floyd still goes pretty intense on fight week to keep his body up to pace with what he has been doing over the last eight weeks.

I sparred with US Olympian Errol Spence Jr. on Monday for the last time, as he was due to fight on Friday in Las Vegas at the Cosmopolitan. He won that fight in some style with a first round knockout. Within a few years he will be probably winning a world title.

On Tuesday after the fighter arrivals at the MGM, Floyd passed by the gym to watch his young stars working out. A fighter that had met Floyd in Atlanta turned up at the gym. Floyd asked ‘The Money Team’ fighters who should give this guy that ‘dog house’ work. Lanell ‘KO’ Bellows and J’Leon Love shouted out “give him that Ashley Theophane work”.

The guys have seen me put in some good and solid performances against Vernon Paris, Shawn Porter, Mickey Bey, Errol Spence Jr. and Celestino Caberello. So it was a really nice touch that they wanted me to represent the Mayweather Boxing Club. Normally that honour goes to a young amateur fighter called Memphis. A couple of other fighters offered their services to Floyd, but Floyd said he wanted to see me work. And work I did to good effect.

I was at the Ricky Hatton weigh in, back in November and that was a massive event, but Floyd Mayweather’s weigh in was a whole different level.

Floyd invited me to his fight and gave me three tickets worth $4,500. The MGM Grand on Saturday had an atmosphere I’d never witnessed before despite having attended some huge shows in the past. It was a truly fantastic event, a fight fans dream.

J’Leon Love, Badou Jack, Lanell Bellows, Luis Arias, Ron Gavill and Floyd Mayweather, all of whom I had trained with in some capacity, all won their fights in stunning fashion. Luis and J’Leon were given hard tests that they came through. Floyd Mayweather put on a punch perfect master class in outpointing Robert Guerrero.

After the fight I went backstage with The Money Team to go and meet Floyd. When he had finished being tested for PED’s, we went off to the post fight press conference.

Floyd praised his opponent for his skill and brave showing, and took the time to share with the listening journalists about his journey so far. He took some questions which he answered in generous fashion, and followed this with a few one on one interviews.

It had been a long but worthwhile day. Whilst walking outside Floyd was seen by some of the fans who had attended the show. He stayed on to sign autographs and took photos for a full and fun thirty minutes.

Afterwards he gave positive acknowledgment to his staff and boxers then eventually left in his waiting SUV.

It reminded me of what my mother and many mothers around my neighbourhood had said many times to us as we grew up – “you choose the right people to hang around – you are your friends”.

I’m gone for now but I will be back with these wonderful friends here in Las Vegas at The Mayweather Boxing Club.