THERE WILL BE BLOOD 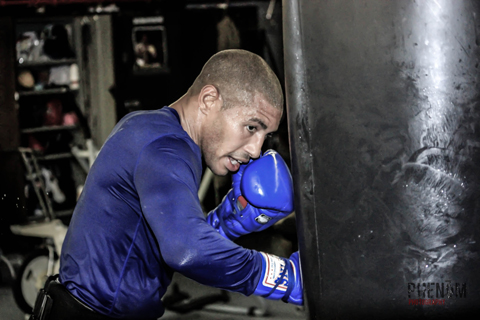 To achieve anything great in life, you have to step outside of your comfort zone. In my tough and unforgiving profession, that tends to mean being prepared to fight in your opponent’s back yard. This dismissing of comfort zones has seen me fight abroad eleven times in five different countries. And vitally, I’ve won in all those countries.

I’ve been coming to America for well over eight years now, and what I’ve achieved so far is what I had set as a target for myself. Now, I have even more to achieve. As Floyd Mayweather always says “I have a fantastic team, and two of the smartest, and best business men in the industry on my team”. Leonard Ellerbe and Al Haymon are two people Floyd always thanks and acknowledges for the part they have played in his success. Floyd is the best boxer in the world, and the highest paid sportsman in the world. That is no coincidence or fluke.

The sparring performances I put in against two weight world champion Celestino Caballero, the money team’s Mickey Bey, world rated fighters Shawn Porter and Vernon Paris during Floyd’s camp for the Robert Guerrero fight got me a decent upgrade to be one of his sparring partners for his clash with Saul ‘Canelo’ Alvarez.

This week saw Floyd steam roll through four of his sparring partners. It was an instructive pleasure to watch; blood and sweat flying off their faces, as Floyd tore into them. Floyd knows when to pause for a joke, but he was down to serious business. By paying big attention to the little things makes him the great fighter he is today. He is in great condition, his timing is near perfect, he’s very smart, super-fast and highly skilled. This has taken him a lifetime to get to where he is.

Being around ‘greatness’ on a personal and business level is mind blowing, but at the same time I’ve worked to be where I am and I’ve never been given anything. I have worked hard for everything I achieved; from London to Las Vegas. It has been a fantastic journey.

Danny is now fighting on the undercard of Floyd’s show against Lucas Matthysse. This will be a really great fight. Delvin Rodriguez will fight the former Floyd Mayweather opponent in November, the legend that is Miguel Cotto – the three weight world champion. DeMarcus Corley has also fought Floyd and gave him a good fight many years ago. ‘Chop Chop’ as Corley is known, has fought some of the world’s best fighters. I may be known as a British champion in the UK, but in the United States of America, I am known for fighting some of their best fighters.

This week saw Floyd do a ‘live stream’ of one of his boxing sessions. I have watched Floyd train five days a week, now fight fans around the world can also share the treat of a unique and special session from one of the greatest fighters ever.

Floyd has also been busy doing interviews promoting the bout. I get to watch some of these live, as I’m with the team in the background. Floyd carries himself well and it is inspirational listening to him.

He is without doubt, the greatest of my time. I wasn’t born when Muhammad Ali was around, and I was a fight fan when Mike Tyson was at his best. To be part of Floyd Mayweather’s team. What can I say “life is more than good”?

Other than boxing training, my week consists of road work around the streets of Las Vegas, strength conditioning and yoga at the 24 hour fitness centre, altitude training up Mount Charleston and sprints at a local track with my coach Nate Jones, who is on Floyd Mayweather’s coaching team. I think he was shocked at my cardiovascular conditioning, as most fighters he takes to the track break down and struggle through it. Not me!

I finished my week of training with world champion, Ishe Smith; we did an intensive session of Bikram yoga for 90 minutes. It’s been nothing, but quality training in Vegas. If it’s not hard, it’s not worthwhile.

Over the weekend I got some great news regarding my next fight. It was timely as it’s my 40th fight. This is also my 10 year anniversary in the professional game, and this year my team and I wanted to do it big and this year has been big. Training with Floyd Mayweather, nothing is bigger than that.

Just like Floyd thanks Leonard Ellerbe and Al Haymon. I have to thank René Carayol.

It takes hard work to get to where I am, but it is worth it. To compete at the top table in sport you have to be able to motivate and push yourself. There is only so much your team can do for you. They can get you the opportunities then it is up to you to perform.

Setbacks are set ups for comebacks. I always come back bigger and better. Fighting in Las Vegas for my 40th professional is in touching distance.