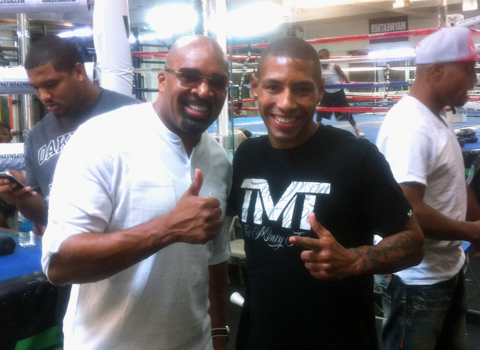 On Saturday 14th September the MGM Grand in Las Vegas is the place to be. Boxing legend Floyd Mayweather will face off against Saul ‘Canelo’ Alvarez.

This is my third week as a sparring partner for ‘Money’ Mayweather. It is an honour and a privilege but also hard and challenging work. I sparred with Floyd on his second day in the gym, then for the next two weeks I just worked out and stayed in shape as Floyd went through five of the other sparring partners. You have to always be ready as you won’t know if you are going to work with him until just a couple minutes before stepping into the ring.

On Tuesday 30th I got the call; “Ash, you working today with Champ”. I was really happy to get the call and I was up for it. Some of his other sparring partners seem a little fearful or have just come to accept the fact that they are going to get beaten up. Not me! I’m trying to be the best I can be, so I soak up the whole experience.

Floyd is 44-0 and an all time great! He beats everyone up. There’s just varying levels of beatings. Limiting the damage is what it is all about. After competing with Floyd for full 5 minute rounds, Floyd’s coaching staff tell me “I did well” and the onlookers are impressed.

To know I helped Floyd get victory over Alvarez is a big deal for me. Especially as I’m from London. I’m not supposed to be mixing with the very best, but I am.

Floyd Mayweather, Leonard Ellerbe and the whole of the Mayweather Promotions fighters and staff have shown me love and respect. I used to watch Floyd train via Sky Sports or BoxNation in the UK, but now I’m part of the training camp.

Dreams can come true, but you have to have self-belief to make it a reality.

You can dream about success, but working hard for it is what makes it happen. Every day is an opportunity to get better. Don’t waste it, you control your destiny. You can’t limit your challenges but you have to challenge your limits and keep pushing them. My belief in myself has seen me called ‘deluded and delusional’ in Britain, but in New York City they’ve always believed in my talent, and now Floyd Mayweather and Leonard Ellerbe do. Believing in yourself when no one else does is a vital trait to achieving your goals. You’ll always have doubters, but if you believe in yourself and have a goal. Go for it! I did and look at me now.

February 23rd is now Ishe ‘Sugar Shay’ Smith day in Las Vegas. I’m very proud of my friend, as he achieved what he has against all odds. Floyd Mayweather made it happen, so he has to take pleasure in helping a fighter achieve his dreams. Next up is me!

Thursday 1st August 2013 is the biggest and proudest day in my 10 year career so far. It is the day that Leonard Ellerbe announced to the rest of the fighters at the team meeting that I was part of Mayweather Promotions.

Later that evening I would go running with Floyd Mayweather and thank him for the opportunity. He shared with me his plans, and what he has in store for me. All the hard work and sacrifice has been worth it. The number one boxer in the world ‘has my back’ and will get me the opportunities to enable me to fulfill my destiny.

On Saturday, Ishe Smith, Ron Gavrill and I did the weekly run up Mount Charleston. It was as hard and unforgiving as always. I now put in the extra half mile which Ishe always does; “champion work” as he calls it.

Afterwards we headed down to Baby Stacks Cafe for breakfast, this week it was my turn to treat the guys, as I’m now officially part of Mayweather Promotions.

Three hours later I was at the Mayweather Boxing Gym. I sparred with Al Haymon’s prospect, Daquan Arnett. He has had stints as sparring partner to WBA Interim champion, Keith Thurman and two time world champion, Andre Berto. Rumours are that he did more than his job and excelled in the sessions. He also sparred Floyd two weeks ago. We had a top quality session and we will work again in the coming weeks.

I ended my week with a swim, yoga session and strength conditioning at the 24 hour fitness centre. Afterwards I had a three hour pampering session, massage, facial, manicure and pedicure. My body is sore from the weeks of hard work.

I’m due to spar world champion Ishe Smith next week. It should be fun, but he warned me “I’m going to take you out in the deep sea and drown you”.

It gets no better than to be sparring not one, but two world champions in preparation for my fight on Saturday 14th September at the MGM Grand Hotel and Casino in Las Vegas.