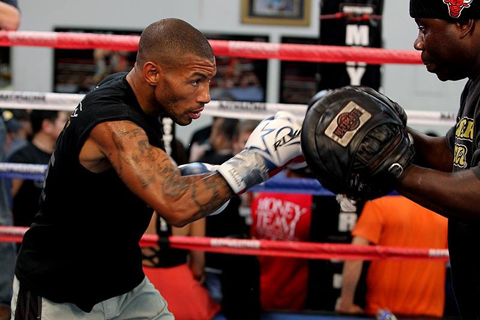 I can still remember watching Mike Tyson, Marvin Hagler and Pernell Whitaker in the 1980s. They lit the flame inside me to pursue a career in the toughest sport in the world – professional boxing.

It’s been a long, sometimes tough and sometimes exhilarating journey, but one that has been so worthwhile. When I turned professional in 2003 at the York Hall in Bethnal Green, East London my goal was always to train, fight and compete at the top in America. Just like the boxing legends that inspired me so long ago now.

A trainer from New York came to visit my amateur boxing club, All Stars in 1997, and pinpointed me as a fighter that could excel in America. He said he was from Gleason’s Gym in Brooklyn. There was some talk of the club financing a trip there for me, but unfortunately, that never came to pass.

Two years into my professional career, I decided to travel under my ‘own steam’ to New York and train at Gleason’s Gym. I didn’t know what to expect, but I knew boxing greats had trained there, and I wanted to see how good I really was. This would prove to be a major turning point in my career, but I wasn’t to know that then.

I started training with Lennox Blackmoore, who had fought the great Aaron Pryor. At the time he trained two world champions, in Vivian Harris and Wayne Braithwaite. He also worked with future champion Elio Rojas, who I had some great sparring sessions with. I thrived in the gym and everyone would show me nothing but love.

Harry Keitt was the first trainer there to do some mitt work with me. He was training Dmitriy Salita at the time, and they took me to training camp a year later, in the Pocono’s mountains to help Dmitriy prepare for a fight.

A couple of years later, Harry and I would start working together, with Jihad Abdul Aziz added to the team in the build up to the Danny Garcia fight.

I learned loads at Gleason’s Gym, and sparred some world champions and top contenders. Yuri Foreman, Paul Malignaggi, Joan Guzman, Elio Rojas have all had good careers, and I’ve had the pleasure of sparring them.

After a good few years of training in New York, Las Vegas was the next obvious destination. Floyd Mayweather, Leonard Ellerbe and the rest of the Mayweather promotions team, made me feel at home from I first entered the gym. After training there for three of Floyd’s camps, I was made part of the team. By far the biggest turning point in my career.

We are now in the final part of training. Nothing but hard work now. We are all ready and sharp for September 14th.

I sparred highly touted prospect, Daquan Arnett, at the Magic show at the Mandalay Bay on Tuesday, as part of the promotion for my fight on September 14th. There was a couple hundred fans watching us spar, followed by Floyd working out with Roger Mayweather on the pads.

Floyd and the Mayweather fighters were there to promote ‘The One’ card and the ‘Money Team’ clothing line.

Rappers Rick Ross, Tyga, French Montana and Jim Jones were all in attendance at the Magic show, due to it being a huge networking event for clothing companies. It was great to see that Ted Baker, my clothing partner, were in attendance.

We put in an extra shift up Mount Charleston on Tuesday, to go along with our weekly run on Saturday. We are really in great shape. The altitude is tough on our lungs, and the mountain is hard on our legs. If it isn’t hard, it isn’t worthwhile.

Over the last two weeks I have done interviews with BBC Sport, The Metro newspaper, Mail Online and BT Sport. The love from the British media and fans has been genuine and great. I really appreciate it. Thank you.

Next week will see me do interviews with The London Evening Standard, ZOO magazine, TalkSport and The Mirror newspaper.

Later in the week I sparred with junior middleweight world champion, Ishe Smith, it is always high quality work and very intense!

On Saturday I got in some explosive sparring with welterweight Cortez Bey, brother to Mickey Bey. Mayweather Boxing Club is filled with some very good fighters, all on their own quest to be the best.

This week saw me step up my work load with my trainer, Jihad Abdul Aziz working with Nate Jones to push me hard. What doesn’t break you will only make you stronger. Jihad will head back to New York this week, and Harry Keitt will replace him here for the final two weeks.

This was the second birthday in a row that I spent in training camp. Last year I was in Scotland sparring with world champion, Ricky Burns. I helped him prepare for his domestic clash with Kevin Mitchell, which he was victorious in.

This year I’m in camp for a career defining fight against Pablo Cesar Cano. The celebrations can wait until after September 14th.

I started at the bottom. Now I’m here!