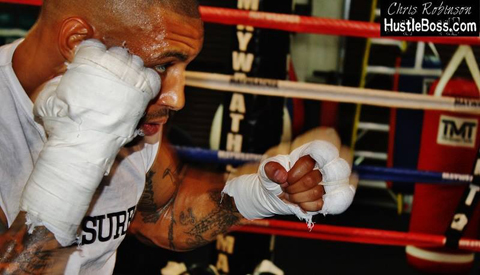 All the work is now done! Floyd Mayweather, Ishe Smith and I are all ready for our important fights on Saturday.

It’s been a great and first class camp. I’ve had the pleasure of sparring not one, but two world champions in my preparations for my fight with Pablo Cesar Cano.

You do not become a world champion by luck – this is a pinnacle that is only achieved by hard work and talent.

Pablo Cano has 26 wins and 20 knock out wins. On the surface, that sounds amazing, but when you look at who he has beaten; he knocked out nobodies. I’ve never heard of them. When he fought fighters with a name – he lost! That’s all that matters.

Oscar De La Hoya believes he is good enough to be a world champion. Floyd Mayweather believes I am also. One of them is clearly wrong! And I believe my promoter knows talent when he sees it.

Make no mistake, it will be a fantastic fight. He believes he can knock me out, and I believe I can knock him out.

Millions will be watching worldwide. I was born for this stage. I always believed I would appear on a show of this magnitude. I just kept working hard, and the hard work has paid off.

Floyd Mayweather himself has told me that “a world championship is waiting for me”.