I STILL HAVE A DREAM 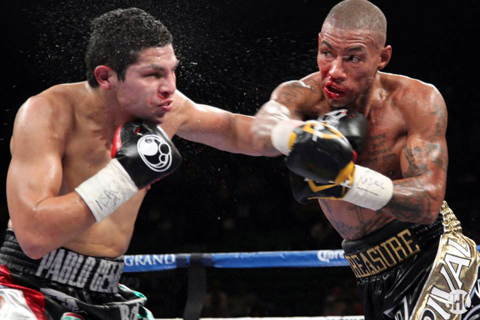 I’ll never forget this week for the rest of my life.

A dream that started long ago as a five year old kid, was realized as a 33 year old man. I always wanted to fight on a super boxing event and I finally have.

I remember watching Mike Tyson, Marvin Hagler and Sugar Ray Leonard in the 1980s and thinking I’d love to be part of that one day. Well that day happened on Saturday 14th September 2013.

A Floyd Mayweather fight is now so much more than just an event, it’s simply the biggest boxing show in the world.

The week started on Tuesday, when we had the ‘Grand Arrivals’ at the MGM Casino. That was unreal! It finally dawned on me then that this was really about to happen.

I train hard all the time regardless of the proximity of a fight. I thrive on it and enjoy it, so I push myself to be the best that I can be. Being in the gym training with great fighters can only get the best out of you.

Seeing the thousands of faces waiting in anticipation for the fighters at the Grand Arrival was crazy. That unique feeling of seeing my opponent, face to face for the first time – is unexplainable. You can’t prepare yourself for an event like this. You can watch it as a spectator, but actually being in there is another thing completely. There’s a heck of a lot of pressure to perform, but I feel like I was born for the big stage.

Pablo Cesar Cano had fought on a Floyd Mayweather card before against the legend, Erik Morales. He has fought Paul Malignaggi at the Barclays Centre in front of over ten thousand people. He has fought boxing legend, Shane Mosley in Mexico. He’d been part of big events before, so he knew the feeling. For me, this was both new and exhilarating.

I knew that I had fought and beaten better fighters than him, but occasions like this test the true character of a man. It can be daunting and nerve racking, or you can love the attention and thrive on the pressure. I loved the pressure and the attention!

Floyd told me later that day in the locker room, that all I have to do is win and he would get me a world title shot. He looked at me and said “you know I can make it happen”. He has presented me with a life changing opportunity, because he believes in me. I’ve waited and worked my whole life for this moment. I’m very grateful to him and Leonard Ellerbe.

On Wednesday the undercard fighters had the autograph signing, and a workout at the MGM Grand. It was again incredible. Everyone had their time slot to sign gloves, and take pictures with the fans. Following this, each fighter was given a chance to show off their skills in the ring in the lobby of the MGM Grand. World champions Ishe Smith and Danny Garcia followed myself and two time world title challenger, Pablo Cesar Cano.

Thursday was the press conference! Leonard Ellerbe introduced me, and summarized the story of how and why I was signed by Mayweather Promotions. Listening to him talk about me, made me feel proud of what I had accomplished. Being signed by the number one boxer in the world isn’t easy, but I achieved it with hard work, perseverance and resilience.

As I walked to the stage. I was surrounded by some of boxing’s top men; Richard Schaefer, Bernard Hopkins and Leonard Ellerbe. These are memorable and unforgettable times, they will last with me forever.

Hundreds of the world’s media were in attendance, patiently listening to me. I started by thanking Leonard and Floyd for this incredible opportunity, because without them, it would not have been possible.

I told my story of how I fell in love with boxing from watching Mike Tyson in the 80’s. Turning professional ten years ago in Britain with no one in Britain’s boxing establishment believing in me. But somehow I had become British champion, and beaten former world champion Demarcus Corley, two time world title challenger, Delvin Rodriguez, who fights Miguel Cotto next and dropped a split decision to world champion, Danny Garcia who had knocked out Amir Khan.

It feels good knowing that I’ve faced some very good fighters on the world stage.

I was told that I stole the show at the press conference, one reporter told me that my story is reminiscent of the “American dream”.

The weigh in at the MGM Garden Arena was filled with 12,000 fight fans, with by far the majority being Mexicans. I was the first to walk out with Notorious B.I.G’s song ‘Juicy’ banging out around the Arena. I signed t-shirts, stopped for pictures and shook hands on my way to the stage to weigh in.

I’ve obviously watched these things so many times on TV over the years, but to be part of it was truly amazing and something I’ll remember to my dying day. This week was the best week in my ten year boxing career.

I got to the stage and Richard Schaefer and Bernard Hopkins were already there. The Commissioner, and the most respected of boxing’s media were below watching and reporting on the proceedings. Some of the Golden Boy and Mayweather Promotions fighters were lined up on stage watching; Shane Mosley, Devon Alexander, Amir Khan, Abnar Mares, Badou Jack, to name but a few.

Pablo Cesar Cano came to the stage after me. The crowd was electric, and we could feel them pulse through our veins as the world’s cameras focused on us. We both weighed in below the 143lb weight limit which was stipulated in the contract. The great modern day champion, Bernard Hopkins stood between us. We did the traditional stare down, no one blinking, no one showing fear. We both so much wanted and needed this win.

Danny Garcia, Lucas Matthysse, Ishe Smith, Saul Alvarez and Floyd Mayweather all weighed in after me. What a gathering to be part of. The bill had already broken the record for ticket sales, and Floyd Mayweather had also broken the record previously held by Mike Tyson, for the highest guaranteed purse of 41.5 million dollars. Which could rise to 100 million after PPV has been added to it.

I was playing my part in the biggest boxing show in history. Ashley Theophane from London. Who would have dared to think that ten years ago when I turned professional. Coming from where I’ve come from, I’m a winner already. I followed my dream and I made it a reality. From London to Las Vegas! But now I was here, I wanted so much more, on a platform like this – I so wanted to win.

Saturday 14th September 2013. Two time world title challenger Pablo Cesar Cano and I went at it, no quarter asked for, and believe me, none given. The Mexican fans were making a deafening roar for their man. Many of the fans in the arena were gripped to their seats.

It was a hell of a fight, it went back and forth. No respect was given, it was full on every minute. We both gave our all and both had to dig deeper than we ever had before. It was a relentless pace, and we felt each other’s blows again and again. The momentum changed quickly from one to the other, we called on our reserves and battled all the way to the final bell. It was tough, very tough indeed.

We waited anxiously for the scorecards, boxing judges Richard Houck and Patricia More seeing the fight different to Richard Ocasio, who scored the fight to me 96-94. He had his strong moments and I had mine. Just like my fight with future world champion Danny Garcia, it was a fight that could have gone either way.

British boxing legends, Ricky Hatton and David Haye both sent me positive messages after the fight. Ricky told me “what a great performance at world level”. David, who has inspired and motivated me with his performances over the years, gave me words of encouragement. “It’s good to be officially ‘world class’, so you never know what title shot may arise.”

Thank you gentlemen, you taking the time to share your supportive words with me will never be forgotten.

Floyd Mayweather told me after the fight that I’d be okay and that he still had love for me. When he was doing his post-fight press conference he told the world’s media “Ashley fought like a champion, I’m still proud of you”.

René Carayol flew from the UK to watch me take part in a historical event. He was proud of my performance and told me “The dream continues”.

Very few people are able to follow their dream and make it a reality. It takes hard work, dedication, and you have to be very mentally strong as you’ll come across many non-believers who, if allowed to, can suck your energy and self-belief. I have not given them the pleasure of seeing me wilt on my special journey.

I only have very good things to say about Floyd Mayweather. He’s obviously a great elite athlete, but he’s an even greater person. Floyd, the most sincere thanks for believing and investing in me.

CEO of Mayweather Promotions, Leonard Ellerbe gave me this extraordinary opportunity, and also believes in my talent.

On the long and arduous road to success, set backs are a necessary part of the process. I have the best team in the world behind me. We will get there!

I have learned loads, I gave loads and took loads from this unbelievable experience – winners never quit, and quitters never win. I’m no quitter.