GETTING RIGHT BACK ON THE HORSE 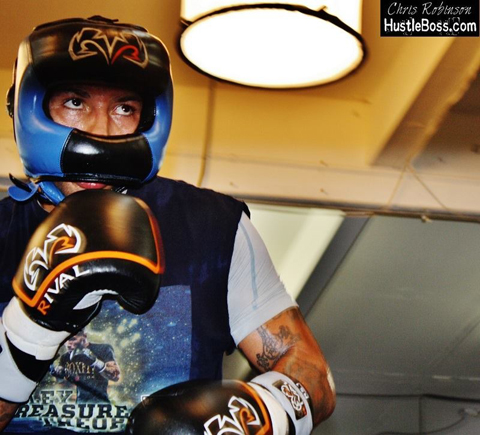 As a wise man once told me, “your life is a result of choices you make… If you don’t like your life it is time to start making better choices.”

When I was six years old, back in November !986, I remember watching Mike Tyson knock out world champion Trevor Berbick in Las Vegas, to become the youngest ever heavyweight champion at 20 years old, a record that still stands today. The young and ravenously hungry Mike Tyson inspired me to become a fighter. 27 years later I finally got to meet the man who lit that fire inside me.

I started my boxing career in London, England now I’m working with the number one fighter in the world, Floyd Mayweather and one of the greatest ever fighters here in Las Vegas. It’s been a great and unpredictable journey. Against all odds I got here, and Floyd Mayweather and CEO of Mayweather Promotions, Leonard Ellerbe, will get me the fights that will bring the best out of me, it’s then up to me to get the desired results.

Badou Jack, JLeon Love, Mickey Bey will be the televised fights on Showtime.

I also have the pleasure of being part of this exciting boxing event. All four of us are working hard to get back to winning ways. The road to the top is never straight forward, the people who get there are the ones who never give up and keep working extremely hard, no matter what obstacles stand in their way.

I’ve been sparring hard this training camp with the Bey Brothers, Mickey and Cortez, along with Zach Cooper. Floyd Mayweather comes in now and again to check out how his fighters are progressing and to watch our sparring and training sessions. He spent some time watching Mickey and I go at it last week.

Former world champion, now esteemed boxing trainer, Eddie Mustafa Muhammad, has been taking the Mayweather Promotion fighters to Mount Charleston for our weekly run. The pain has really begun! High altitude training is always tough on the lungs and painful on the legs. Afterwards he tells us stories about himself, Muhammad Ali, Jim Brown, Mike Tyson and other sporting greats. Being around so much experience is like a mobile library on hand. His advice is greatly appreciated and his stories are always both instructive and amusing.

I’ve began training with Mayweather Promotions strength conditioner, coach Chris Ben-Tchavtchavadze for this camp. He is a welcomed addition to the team. My boxing trainer, Jihad Abdul Aziz from New York City arrives this week in Las Vegas to add the finishing touches to my training camp. We’ve worked together for my fights with Danny Garcia, Delvin Rodriguez, Lenny Daws, Jason Cook and Pablo Cesar Cano, and picked up three championship titles along the way, British, International Boxing Organisation and Global Boxing Council’s championships. There’s more to come!

Former IBF world champion and current world IBO champion, Joseph Agbeko is here training with Roger Mayweather for his unification fight with Guillermo Rigondeaux on 7th December in Atlantic City. Two weight and five time world champion, Celestino Cabballero is back in the gym, training for his comeback fight with Jonathan Perez in Panama. Shawn Porter is currently training for his world title challenge to Devon Alexander at the Mayweather Boxing Club. Two time world title challenger, Kofi Jantujah has been using his valuable experience to advise and assist with training the fighters at the Mayweather Boxing Club. It is such a motivating and positive gym to be a part of. I really love it here!

CEO of Mayweather Promotions, Leonard Ellerbe, has told The Money Team fighters that we have everything at our disposal, all we have to do is ask. Floyd Mayweather told me upon signing for his promotional outfit, “If there’s anything I need, he’s got me.” It is a real family here. Leonard and Floyd only want the very best for us.

Floyd has just been awarded WBC Supreme Champion. He is the only fighter in history to win WBC diamond and emeritus championship titles. He is an eight time world champion in five weight divisions, and sports an unblemished record of 45 wins and zero losses.

He is truly one of the greatest ever boxers to ever live, and I have the pleasure to have him as my boxing promoter.

In life, if you want to achieve anything you have to work hard for it. 4 weeks to go and counting!

“Surround yourself with only people who are going to lift you higher.” – Oprah Winfrey