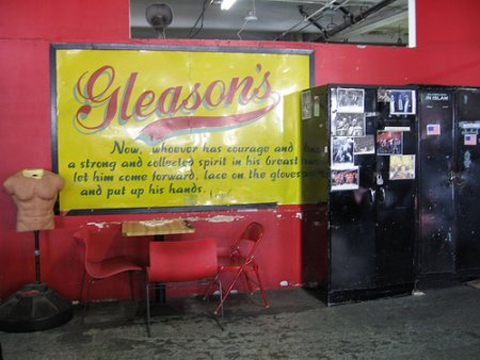 After seven hard, but fulfilling months in Las Vegas last year I’m now back in New York City, the place where my “American Dream” started. I’ll be back training at Gleason’s gym in Brooklyn.

I’ve come a very long way. On my initial visit to America back in 2005, I had a record of nine wins and two losses. I now have a respectable thirty four wins and six losses.

Wanting to come to America was all about challenging myself to see how good I really was. This was necessary as I had a compelling and irresistible dream from the age of five that I wanted to fight and train in America. I didn’t know if I would make the grade, but I also knew that I would never give up trying. After training under the tutelage of Commonwealth champion and world title challenger to the great Aaron Pryor, Lennox Blackmoore, I knew I could hang with the best. Lennox trained world champions Vivian Harris, Wayne Braithwaite and Elio Rojas at that time so I was amongst great company.

Stan Hoffman, manager to over 30 world champions had seen me sparring world title challenger, Dmitriy Salita, and told me that I have the attributes that can’t be taught, and what many world champions have. He gave me my debut in America in 2008. Six months later I would go on to beat former world champion, DeMarcus Corley, who had just lost to Devon Alexander for the WBC number one spot.

Square Ring Promotions would then offer me a fight with former undisputed welterweight world champion, Zab Judah, on the undercard of Roy Jones v Joe Calzaghe at Madison Square Garden. Zab decided to turn down the fight for reasons only he knows – I’m still interested in fighting Zab.

18 months later I dropped a split decision to future 140lb world champion, Danny Garcia. Five months later I moved up a weight division to fight IBF world number three, Delvin Rodriguez. He was due to fight Saul ‘Canelo’ Alvarez in September. I beat him and scuppered that fight. He would later fight the Puerto Rican great, Miguel Cotto.

I opened up the televised portion of his record breaking PPV fight with Saul ‘Canelo’ Alvarez at the MGM Grand Casino in Las Vegas last September. I dropped a split decision to two weight world title challenger, Pablo Cesar Cano. Setbacks happens, that’s life. Losing is a necessary part of sport. It’s how you bounce back that is vital. I now have a nation that is proud and behind me as I’m representing the UK in Mayweather Promotions.

Lamont Peterson and Danny Garcia are the targets and my focus. I’m working hard in the gym to earn my shot at the champions. I’ve achieved everything I’ve set out to do in boxing. Being a world champion is the final goal for me to achieve. I believe it is part of my destiny.

You can never put a limit to what you can achieve in life. You can always achieve more than anyone believes you’re capable of – it’s all down to just how much you want it.

Working with the CEO of Mayweather Promotions, Leonard Ellerbe, and the Pound 4 Pound King, Floyd Mayweather is more than a dream come true.

Without goals and dreams it is so much harder to keep being positive whilst climbing the tough and unforgiving mountains that block the roads that lead to success.