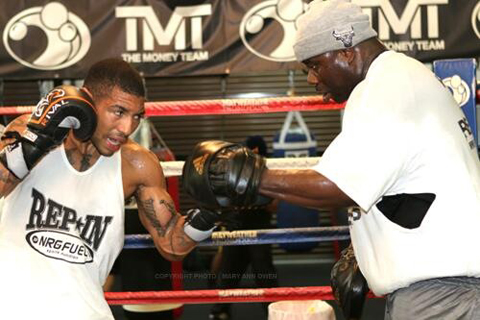 It is week three in Las Vegas and my work load is ratcheting up week by week. My team work extremely hard and believe me, they work me very hard indeed, and I thrive on hard work.

My good friend, Ishe Smith, is already the first and only Las Vegas born fighter to win a world championship. On May 2nd he aims to win his second world title, and I firmly believe he will!

I’ve come a long way – from York Hall in Bethnal Green to the MGM Grand Hotel and Casino in Las Vegas. Who says dreams can’t come true? I’ve already fought on the biggest stage in the world of boxing.

I push myself day in day out to get the best and most out of my body. I’m a fighter, a Spartan, a barbarian in the ring. That is my job. To fight, to give my best and to win. But also to reach for the stars and become one myself. It would not be possible without guidance and support from three great men. I’m here because of a great team around me; Floyd Mayweather, Leonard Ellerbe and René Carayol.

René Carayol walked into my life three years ago. A chance meeting at Andy’s barber shop in Paddington, West London. René was so intrigued that he bought ringside seats to watch my British title challenge at Wembley Arena against the then dominant British champion, Lenny Daws. He came along to support me and to see if I was as good as my barber, Andy, believed I was. I crushed Lenny, dropping him twice in a unanimous decision that ripped the British title from him and bestowed the crown on my head. I was now the King of the 140lb division in Great Britain.

René was converted, impressed and saw what many had not bothered to look for.

René saw the talent, potential and charisma I had inside of me. He believed I had all the attributes to become a real star of my chosen profession. He realised that with a little support and unwavering belief, I could go far. He backed me and afforded me the resources to set up shop in faraway Las Vegas.

We have never let each other down.

I then met the number one boxer, and highest paid sportsman in the world, Floyd Mayweather, the ultimate role model for any fighter, and the impressive CEO of Mayweather Promotions, Leonard Ellerbe. They both saw what René had seen, and quickly also believed I had the attributes to become something special. They respected my attitude and the single minded work ethic that makes me the person that I am.

They have also backed me, and I’m not about to let them down either.

I have three men who have achieved so much in the world of business and sport. I am in the safest of hands. With a team with so much experience and success, I cannot and will not fail. I might lose a close decision, but I will have given everything and will always come again – better than before.

Remaining in London was not an option – going away from home, on my own, but always armed with a single minded belief and trust in my ability, my fortitude and a steely resolve to reach my destiny.

I’m closing in on my 35th win. I’m just a couple of wins away from a landmark battle with Lamont Peterson, or a defining rematch with the number one 140lb fighter in the world, Danny Garcia. We had a fearsome battle that went to the wire four years ago. Many boxing fans at ringside believed I won. But the only people who really matter are the three judges seated around the ring. Two of the three judges controversially believed he won by one round. It really was that close, with absolutely nothing in it. We must and will battle again. This time the world of boxing will be watching, and there will be no hiding place and the winner will take all.

A winner’s attitude? An unbreakable mind-set? A dedicated lifestyle? Definitely a tough journey – but NEVER settle for a destination.

Whilst I may be travelling alone, I’m no longer on my own, I now have that positive support that we all need to keep climbing, no matter how steep and difficult the mountain.

Too many people settle for the achievement of one or two goals as being enough to deliver their ambitions. That will never be enough for me, in my opinion – when you factor in the twists and turns, and ups and downs of what can be a long hard life, mental fortitude and the ability to bounce back, no matter how tough the setback – this is what will see you through.

If you have never failed, then you probably haven’t tried hard enough OR you are the one and only, Floyd Mayweather.