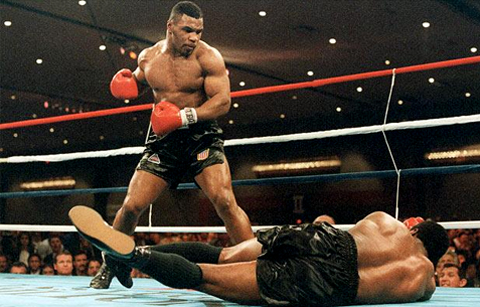 It was Saturday 22nd November 1986, when an extremely young and defiant fighter called Mike Tyson, became the youngest heavyweight champion of the world in the history of the sport of boxing. He won the crown in Las Vegas at the Hilton Hotel. Tyson was the self-proclaimed “baddest man on the planet”. After witnessing the demolition – no-one would dare argue with him.

28 years later that same kid is about to have his second fight in Las Vegas, on the undercard of the Floyd Mayweather vs Marcos Maidana extravaganza at the MGM Grand Hotel.

Journeys have no definitive timeline. Do the right things and continue to work hard and harder still, and you will get closer to the outcome you dream of.

It’s all about the big picture. Setbacks will happen along the way, all successful people have learnt that nothing is straight forward. Many scientists, politicians, lawyers and doctors have all experienced setbacks on their path to achieving their ultimate goal. Boxing is no different. It takes time, focus and a good few years to achieve “The Dream”.

Amir Khan against Lou Collazo is the recently announced chief support to Floyd’s fight. I’ve sparred Collazo a couple times, and I’m on very good terms with his team as they tried to sign me last June. I graciously turned down their offer, as the number one boxer and highest paid sportsman in the world, Floyd Mayweather had promised me the fights I crave against the world’s best. And anyone who knows Floyd, knows he’s a man of his word. I will now have been on two of the biggest boxing events in the last nine months. That is something to be very proud of, and believe you me, I’m very proud of my achievements so far, but much more to do and much further to go. It’s a long way from London to Las Vegas, but it is sure worth it, I’ve got the number one boxer in the game, backing my name.

Adrien Broner will also be on the show, with JLeon Love opening the PPV telecast.

It will be a great weekend of boxing in Las Vegas with Ishe Smith fighting against Lara for the WBA Junior Middleweight championship at the Hard Rock Hotel and Casino, the day before ‘The Moment’.

It has been another week of hard work and dedication in Las Vegas. There are 5 tough weeks left until I fight at the MGM Grand again. Week in, week out, the aim is to be better than the week before, and in better shape and closer to my fight weight. Mountain runs, track work, boxing drills and strength conditioning. I can see why very few fighters get to this level. It is easier said than done, especially given the sacrifices you have to make, the torture you have to put your body through and the mental focus you need. It is not at all easy.

Finding faults is the easy bit, finding the remedy is what champions are made of.