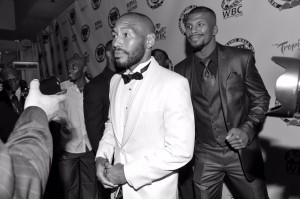 Carl Froch is without doubt one of Great Britain’s most accomplished champions. He stated this week that if his proposed fight with Julio Cesar Chavez Jr. in Las Vegas falls through, then he will consider retirement as a James DeGale fight in the United Kingdom just doesn’t motivate him or add to his legacy.

Carl has done everything a fighter can do in boxing. He’s been a world champion multiple times, made millions of pounds from the sport and has fought the very best of his era, often having to travel to their backyard. Very few British world champions have fought the level of competition Carl has. I firmly believe he deserves to go out with one last mega fight in the fight capital of the world, Las Vegas.

Mayweather Promotions employee, Cornelius ‘Boza’ Edwards, is a former Commonwealth champion who made his debut in London before going on to fight in Italy, Monaco, Zambia, France, New York and Las Vegas. He went on to win the WBC world title and fought boxing greats like, Alexis Arguello, Jose Luis Ramirez, Hector Camacho and Bobby Chacon. He retired with a record of 45 win and 7 loses.

Floyd Mayweather is always praising him as a former world champion and appreciates all the work he does for the team. As I told Boza this week, I’d be more than happy to have a glittering boxing career like his. I believe he is seriously under appreciated by the British boxing scene. He is definitely appreciated by the American boxing scene, he guaranteed excitement every time he ducked through the ropes.

This Saturday he was a guest of honour for the Nevada Boxing Hall of Fame evening at the Tropicana hotel in Las Vegas. He was inducted along with boxing greats such as Roberto Duran, Evander Holyfield and Richard Steele.

Floyd won Best Fighter of the Year for the second time in a row. Mike Tyson, Sugar Ray Leonard, Earnie Shavers, Mike McCallum, Kevin Kelley, DeMarcus Corley, Bermain Silvestre, Shawn Porter and Jessie Vargas where all in attendance. Being amongst some of the world’s best fighters and boxing legends just reminds me how far I’ve actually come. I’m a kid from Paddington, London, who had a dream and just worked hard to make it happen.

Floyd introduced ‘Boza’ and said he valued him as a mentor and a man whose opinion he values. I’m privileged to be in the company of both of these legends every day during training camp.

You can never take for granted what you have, as there are people out there in the world who would give anything to be in your shoes. I give my all, all the time, be it in training or fights.

Boxers rarely come from anything but humble beginnings. Why else would you choose one of the hardest sports in the world to make something out of your life?

My college teachers begged me to go to University, but I was of the view that I didn’t need a degree for what I wanted to be in life. I had an idea and a dream of what I wanted to accomplish in my head, and I set out determined to achieve it. Has it been easy? No! Has it been worthwhile? I’d say yes. I’d do everything exactly the same again, because every set back served a purpose and it lead me to where I am now. Signed by the number one team in the world – Mayweather Promotions.

I’m about to have my third fight in less than twelve months in the fight capital of the world. Mayweather Promotions have given me the unique opportunity that many fighters dream of. I’ve recently had two British Olympic Gold medallists ask about how they could work with Mayweather Promotions.

A fighter at Mayweather Boxing Club was joking this week that all of the fighters signed by Floyd will one day be reminiscing with their grandchildren about the ‘good old days’ with Floyd Mayweather.

I’m currently privileged to watch greatness close up day in day out. One day I will reflect back and remember these halcyon days in Las Vegas, just as Muhammad Ali’s team reminisce about the unforgettable times they spent with him.

You cannot go back in time and correct your mistakes, but you can work hard to learn from them and make a better future.

There is three weeks to go until I collect my thirty sixth victory and move a step closer to being on the big stage again.

On occasion I’m reminded that I’m a former British, IBO International and world number four. Some remember that I’ve fought in America, St Lucia, Germany, Luxembourg and England. And the records show that I’ve had great fights with the likes of Danny Garcia, DeMarcus Corley, Delvin Rodriguez and Pablo Cesar Cano.

I’m currently signed to Mayweather Promotions with glorious days ahead of me.