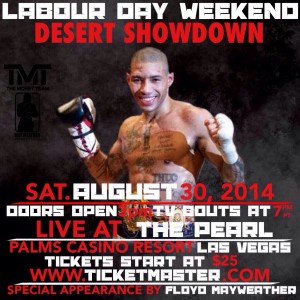 Palms Casino and Hotel in Las Vegas on Saturday 30th August 2014 is the date of my next fight, which I assure you will be my 36th victory of a career spanning 11 years and 43 professional fights. I’m closing in on my 40th win, but more importantly, a world title shot.

I will turn a young 34 years of age on fight night. It’s been a long and hard journey during my professional career. It certainly hasn’t gotten easier, I’ve just gotten better and more experienced.

As Dmitriy Salita told me on Sunday, “You will be world champion.” Olympic Bronze medallist, Nate Jones, had said the same thing to me the day before.

Floyd Mayweather has been a professional for 18 years, so my 11 years in comparison leaves me with many more glorious years ahead of me. Floyd is 37, Bernard Hopkins is 49 and Juan Manuel Marquez is 41, these three fighters are kings, legends and elder statesmen of boxing.

Floyd has been stepping up his own training and putting in some truly amazing work. Watching this man train so excruciatingly hard, makes me push myself harder and harder. There can be no excuse when you see the best fighter in the world pushing himself to be the best he can be.

Fight week is here, just the last few pounds to drop. Everything is on target. I’ve kept up the intense sparring sessions, I’ve passed my target running miles, strength conditioning has been up to point as always, with weekly massages to refresh and revitalise my body where 100% effort is needed. I’m all set and ready to go out there and get win 36. Nothing will get in my way of making that a reality. Las Vegas has become my home away from home.

Dave Brown, my UK trainer from All Stars Boxing Club in London arrived on Sunday, he will help Nate Jones with my final week of preparations. My NYC trainer from Gleason’s Gym, Harry Keitt, will arrive on Thursday to finalise my team. With both these men I’ve achieved a fair and decent amount; IBF world number 4, British and IBO international champion. I’ve fought around the world including Germany, Luxembourg, St Lucia, England and America with my team.

There’s only so much one man can do, but Floyd Mayweather, Leonard Ellerbe and René Carayol have made it possible for me to have the most comfortable camp possible in the harshest of conditions.

My coaching staff all have a job to do and it gets done to the professional standard we are accustomed to. Together we are the ‘A’ Team. Team Treasure has come far but the next level is the super fights, the world championship and of course, the big names.

Every fighter has their own team in the Mayweather Boxing Club and it’s nice that other fighter’s teams tell me that I’m the hardest working fighter in the gym (minus Floyd of course). I’m not the most skilled or the strongest, but I’ve come all the way from London, England bringing my determination and will to win. I’ve come here to work and give my all. I’ve got the best mentor in the fight game, Floyd Mayweather.

The gym is stacked (and blessed) with experience at the highest level of our sport. Former world champions in Cornelius Boza Edwards, Eddie Mustafa Muhammad, Roger Mayweather and Lou DeValle. We have a great and world class team of coaches and fighters. Everyone working flat out and hard but still finding the time to support one another.

Even though we are all on our own personal journeys, we all wish each other the best – and mean it.

Protect yourself at all times!

“Treasure the love you receive above all, it will survive long after your gold and good health have vanished” – Og Mandino