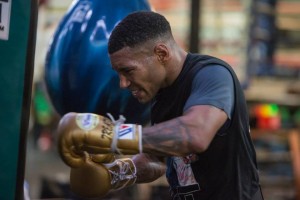 I’ve been back in Las Vegas for two months now and my 45th fight is now only a month away.

This week I had a pleasure of working out with some hugely accomplished boxers that I would simply classify as “Legends”.

All very successful fighters indeed, having through the years fought the very best available.

I battled with them throughout our competitive sparring sessions. They brought out the best in me, punishing me for every mistake I made.

“To be the best you must surround yourself with the best”. This has been more than just a motto for me, it’s become a way of life and I believe this attitude was paramount to me being signed by Mayweather Promotions.

This week was very productive on all levels. It is always helpful and necessary to be surrounded by people whom I respect and admire, they push me day in day out to be the best I can be.

Over the weekend I was invited to take part in a Photoshoot for a new clothing line, it was good fun and a great initiative to get involved in.

I will be on Sky Sports News this week, being interviewed about the richest fight in boxing history – do look out for it.

I’m getting very excited about my fight at the Palms Casino and hotel on Thursday 30th April, two days before Floyd battles Manny Pacquiao at the MGM Grand.

Las Vegas is always a lively place, but even Vegas will be transformed that week, and there will be thousands of fellow Brits in town and I’m sure that the atmosphere will be amazing.

I had the perfect ringside seat to watch Floyd Mayweather push himself this week; sparring, pad and bag work, jumping rope and then running side by side with him around the streets of Las Vegas.

“The Rumble in the Jungle” was a legendary training camp for Muhammad Ali. It provided a career defining win for him. This training camp is the same for Floyd Mayweather – a fight estimated to be worth between 400 and 500 million dollars.

The richest fight ever to take place AND I get to witness it all from behind the scenes, and soak in what it really takes to be a legendary fighter.

As a British born and bred fighter, to have the unique and very special opportunity to be here as Floyd’s UK guy is a huge privilege.