Dreams are for Believing in 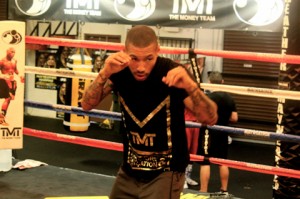 You push your body so hard. Right to the verge of breaking point. You feel like you’re going to collapse with exhaustion. You can never afford to get comfortable with your work ethic. No world class athlete or successful business man ever does.

I’m three weeks from my 45th professional fight. Just as I pushed my 22 year old body in 2002, when I had dreams of one day walking amongst my idols. Now in 2015, as a 34 year old man, I’m pushing even harder now. I’m a veteran in the boxing world. I walk among greats. I walk among my idols. Some are now my rivals. It’s been a great journey.

A mind blowing story that one day I’ll be able to share with audiences around the world.

I made my professional debut in 2003. Frank Warren, Mick Hennessy, Matchroom Sport and Frank Maloney were the top promoters at that time in the UK. None of them at the time believed I’d achieve much in the sport. That only added fuel to my fire. The furnace was blazing with determination.

I headed to New York City in 2005. Working at Gleason’s Gym in Brooklyn. In 2010 I became world number 4 defeating world number 3 Delvin Rodriguez, and derailing his scheduled fight with Saul Alvarez.

I headed back to London to defeat British champion, Lenny Daws. Two years later I arrived in Las Vegas as I believed I was good enough to be part of the team of the number one boxer in the world, Floyd Mayweather.

Being able to watch Floyd workout gives me that extra motivation. That extra inspiration. He had a dream, and he worked very hard to make it a reality.

My story is becoming more special by the day, but I have so much more I can achieve. So much more I believe I will achieve. Every day I move closer to making that a reality.

First I have an opponent with 30 wins, 21 by knockout with only 4 losses. I’m back on the big stage where I always want to test myself. Always challenging myself. This is the perfect opponent to set my case for a world title challenge. I’m ready!

Back in London, Vitabiotics have a great new marketing campaign with some inspiring advertisements; featuring world class athletes Mark Foster and Jimmy Anderson alongside yours truly. I’ve been told that they look great. Even though I’m away from the UK, Vitabiotics have ensured I’ll still be there in magazines, newspapers, buses and train stations.

Dreams are just dreams unless you wake up to make them a reality. I’m here living my dreams.