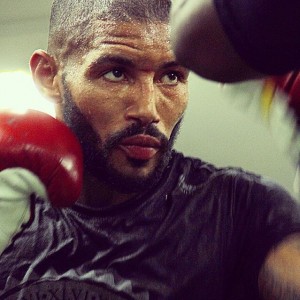 All eyes will be on Las Vegas this week. Journalists from all over the world have flown in to cover the mega event that will be taking place on Saturday May 2nd at the MGM Grand.

It’s a huge and historical week in sport and I’m a part of it. The Money Team’s UK fighter will be fighting a dangerous Mexican opponent – 30 wins, 21 by knock out with only 4 losses. I’m in the deep end, but I wouldn’t have it any other way.

Floyd told me back in December he’s putting me back in the big fights. He has delivered. Now it’s up to me to deliver and get the victory. It won’t be easy, but when did I ever do it easy.

Training hard and losing weight is always punishing on your body. This is my 45th training camp. I’m targeting my 38th professional win. 12 years as a professional, longevity isn’t easy in this game.

I’m feeling the best I’ve ever felt. I feel like I’m still improving as a fighter. Experience is something you cannot buy. Being a veteran is something that enables me to know there are no limits except for the ones you put in front of yourself.

This week will be crazy in Las Vegas. The biggest fight ever to take place, and I’m part of it. I’ve seen Floyd Mayweather push himself day in day out. That’s motivated and inspired me to raise my own game.

I’m positive the whole of The Money Team will be victorious this week.

Last time I was on ESPN was 5 years ago, when I beat world number three Delvin Rodriguez. I went on to be British champion before becoming part of Floyd’s team for the past two years. I’ve had a remarkable career, one that no one believed possible back in 2003 but myself

Dreams are made to come true but only by those who have the courage to pursue them.

I’m very proud of my team mate, Badou Jack. He beat Anthony Dirrell for the world WBC super-middleweight title on Friday in Chicago. Mayweather Promotions have a new world champion in the team. That was great motivation for my own fight this week.

I congratulated Badou and he responded with;

“It’s your turn now. You’re gonna be the next champion from MP.

Just like Ishe Smith and Mickey Bey before him, he was a huge underdog, but he put in a career best performance to achieve his dream.

This is a side of Floyd Mayweather which is not really appreciated – he’s always helping other fighters reach their goals. Fighters that maybe other promoters didn’t appreciate or believe in, but he’s seen something in them and helped them to win a world title.

I’ll be doing my bit in the media back in the UK this week; I’ll be asked for my opinions and insights on Sky Sports, Boxnation and ESPN and I’ll be sharing more in a large number of interviews with a decent number of newspapers and magazines.