The Only Way is Further Up 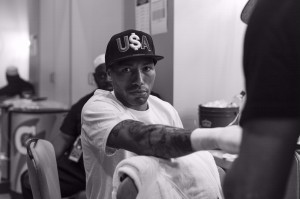 I’ve now been in the city of Las Vegas, the fight capital of the world, for just over two years. Home to some of the best fighters ever to put gloves on; Floyd Mayweather, Mike Tyson and Roy Jones all reside in Sin City.

Mike Tyson after watching Floyd dismantle Manny said to Sky Sports “Floyd is unstoppable right now. This is his era.”

Nine weeks of working towards my own landmark of 38 wins in 45 professional fights. Floyd hit 48 wins in 48 fights. I’m being the greatest I can be, but being surrounded by legends of boxing helps me push that little bit harder.

18 months with Mayweather Promotions and I’ve had six fights, five wins with one split decision loss to former interim WBA world champion, Pablo Cesar Cano. I’ve fought some tough fighters under Floyd’s guidance. The last three have been Mexican and all three brought the best out of me. Anything less than my best and I would have lost.

The world’s media embarked on an invasion of Vegas; CNN, ESPN and Sky Sports were just three of the news outlets that were looking for insights and authentic views that interviewed me.

The boxing legends, Sugar Ray Robinson, Henry Armstrong, Marvin Hagler and Willie Pep were famed for fighting all over the world. I remember fighting in Luxembourg, and the UK media never took it seriously. They certainly sat up and paid attention when in my next fight I opened up the telecast for the biggest boxing event in history at the time, Floyd Mayweather v Saul Alvarez. People still struggle to understand the route you take to get to the mountain top. Sometimes you need to take a detour or a couple steps back, as success is never straight forward.

I’ve had loads of downs, but the ups have made them all worthwhile.

I’m 45 fights in to a 12 year professional career. I have a figure of 50 victories in mind before I ride off into the sunset. It’s been a beautiful journey, one I wake up to every day and feel appreciative of all the people I have in my life. Without the struggle I never would have met them.

I’ll be in the United Kingdom for a whistle stop tour during May to attend events, meetings and catch up with a series of media interviews including

Let no one discourage your ambitious attitude. You don’t need a fan club to achieve your goals. Be your own fan club.