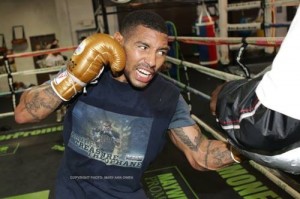 The weeks keep getting better. Four weeks from now before I have my 46th professional fight.

I sparred two time Olympic and two time world champion, Yuriorkis Gamboa this week. The last two weeks have seen me work with some quality fighters; Floyd Mayweather and Mickey Bey where two of the fighters I sparred last week. One thing is for certain, my opponents won’t be as good as them.

Training hard is very important, but so is rest and recovery. The Subzero Recovery centre sees me every day. Cryotherapy has helped me tremendously, and I’ve now added ice baths into my routine. The number one entertainment channel in America, TMZ, highlighted just how hard I find these session by broadcasting a video shot by TMT coach Chris. They say all press is good press, no matter how painful the experience.

In my down time I took a thrilling ride to the Grand Canyon by helicopter and then took a calming boat ride across the river, and then had an enjoyable time with a horseback ride once there. I also found the time to go up in a hot air balloon and had some fun go-karting.

It was my ‘cheat’ week so my diet went out the window – Hakkasan, the Eiffel Tower restaurant and the “Top of the world” restaurant in the Stratosphere casino and hotel were three of the Vegas hot spots I treated myself to.

It is now 28 days until I fight on the historic Floyd Mayweather boxing event. This is uniquely billed as his last ever boxing fight. His record is currently 48-0 and he’s going for number 49, which will see him equal Rocky Marciano’s 49-0.

I asked Floyd two years ago when he was training for the Robert Guerrero fight when he was 44-0, if 50-0 was the target. He told me “I never look past the fight in front of me.” If he retires at 49-0 he’s had one hell of a great career, beaten 20 plus world champions in that time and been a five weight world champion. What more could you ask for?!

It’s full steam ahead now, this is a momentous occasion to be a part of.

When I started boxing at the age of 7 years old I had a dream of one day fighting in America. When I was 14 I had my first amateur boxing match and when I was 22, I made my professional debut in 2002. In 2005 I said it was now or never to go to America and see how good am I?

I promised myself to always give my best and I always have. There have been set backs, as there always are in any journey, but I continue to put 110% effort in.

A dream has turned into reality. Against all odds I’m now promoted by the number one boxer in the world.