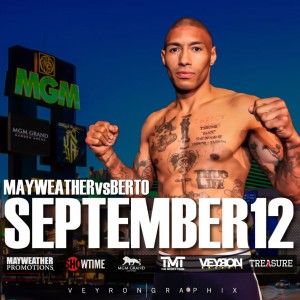 We are now under three weeks away from Floyd Mayweather’s final fight of his spectacular career. He currently stands at 48 wins and 0 losses.

It is my privilege and honour to be part of this historic boxing event on Saturday 12th September 2015. This will be my seventh fight with Mayweather Promotions, and the third time I’ve had the pleasure of fighting on Floyd’s show.

The world will be watching again. Old and new media will be arriving from all over the world to grab an interview with Floyd and his team of fighters. The energy and vibe generated by a Floyd fight is unmissable. These events are a sponsors dream – Las Vegas is always packed out. Fans fly in from Europe, America, Asia and Africa make it here. Millions of dollars are generated during the fight week.

There’s nothing like it. This is the third year I’ve had the opportunity to witness these events up close and in person. Representing the United Kingdom and fighting as part of The Money Team is something very special indeed.

I’m going after my 39th victory and I’ll be 35 years old by the time the bell rings.

I’ve been sparring with a bunch of up and coming youngsters this week. They are full of life and hopeful dreams. This ‘old’ boy has taken them into the deep sea on a sink or swim mission, unfortunately, a couple of them drowned in the choppy waters.

As the wise man once said “with supreme confidence, determination and disregard for obstacles and other people’s criticisms, go after your dreams.”

I’ve always believed in myself whether I could see the end of the tunnel or not, I just kept working and I just kept believing. So many times I could have given up, but I told myself that I’m just going to keep on doing what I’m doing, giving my best and what will be will be.

This mentality lead me away from the relative comforts of London to the harsh reality and competition of New York City then to the home of boxing, here in Las Vegas.

Who would ever have thought that Ashley from All Stars Boxing Club in Paddington, London would now be an active part of the success of The Money Team here in Vegas?