Anyone can do Easy 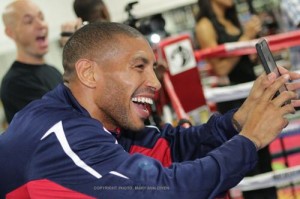 Yet another week down and it’s all systems go. It’s been an extremely hard and unforgiving ten week training camp. There is only one more week of hard work and then its ‘fight week’. This is where Las Vegas really comes into its own and the media and fans roll into town.

It doesn’t seem that long ago that I watched this type of extravaganza from London as a fan, now I’m not just here but I’m an active part of it. This is more than incredible – some might even say ‘unbelievable’.

I had my own vision, and fuelled that vision by believing in myself. I never knew if it would happen, but I knew I had what it took to get there so I never stopped working.

I was alone for years. I achieved a great amount on my own, but René Carayol witnessed me lifting the British championship at ringside. He really believed that I could achieve so much more. He had a vision of me inspiring kids from humble beginnings like myself that had never had anyone believe in them. In fact it was worse than that – people just didn’t care what became of them.

Ted Baker and Wellman vitamins backed his vision. Wellman vitamins putting me in thousands of magazines and billboards across the United Kingdom. Our partnership with Wellman has gone from strength to strength. They provide me with all the nutritional support that an elite athlete desperately requires and in return I continue to act as an active ambassador for their great products and programmes. We are building something special and will appear together wherever those who aspire to get fit and healthy and remain so gather; trains, buses and who knows, television commercials. We have just signed a two year extension which will take me into 2017 working with this great company, Vitabiotics.

I’ve been part of Floyd Mayweather’s sparring team for this camp, which is something extra special in itself. I’m helping him to get victory 49, which looks like being his last fight ever.

This week we had the busy but essential media week, so I did quite a few interviews with some TV stations and some of the best boxing reporters in the business.

I hit 35 years young on Sunday. I celebrated by having an afternoon of fun in the Las Vegas desert on an ATV (all-terrain vehicle) and fly boarding in Lake Las Vegas. And then the perfect day was finished off with an evening of fine dining with a superb meal at Alize in the Palms Hotel and Casino.

I’m in the final stretch of my career. Every fight is important. I’m so close to victory 39 but I want to reach 50 before I walk off into the sunset. I’m feeling great. Looking great. I’m ready for September 12th.