This is MY Moment 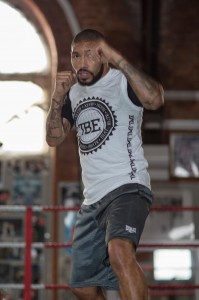 My career defining fight is now less than four weeks away.

I’m a big underdog. But, what’s new? When have I not been?

Having been born in one of the poorest parts of London – surrounded by unemployment, crime and poverty and a distinct lack of hope or ambition.

To have got this far is already an achievement in itself.

If I only focused on what people thought of me, I’d stay in bed instead of pushing myself every day. I respect any person who has to work for their dreams and goals. It surely isn’t easy.

Boxing Legend Eddie Mustafa Muhammad had offered me some words of wisdom as three of his world champion fighters, Iran Barkley, Michael Bent and Herbie Hide all caused huge upsets, when they were not given a chance. “You can beat this guy, Ashley.”

I’m privileged to be surrounded by champions Floyd Mayweather, Badou Jack, Ishe Smith, and Roger Mayweather. Positive energy is everything. These guys have achieved what I crave, so their knowledge is something I respect and soak up.

From the moment when four time world champion, Adrien Broner, called me out, back in October, after he reached legendary status with his fourth championship at the age of 26 years old – it’s been ‘go’ time.

I joined my promoter, Floyd Mayweather for his recent London appearance, as part of his European tour, at the London Hilton Hotel on Park Lane.

I did a number interviews with Sky Sports, and many other channels and news outlets.

I’ve put in my work at the All Stars Boxing Club in Paddington, London and I’m finishing it off at the Mayweather Boxing Club here in Las Vegas.

I’m in great shape right now, and I’m looking forward to fight night. It’s going to be extremely hard. I’m not preparing for a boxing match, I’m preparing for an all-out war. From round 1 to 12 inclusive – I expect us to be giving our all.

The champion has gone on the record that he is going to “knock me out within 4 rounds”. Make no mistake, I will be going straight at him. As former world champion, Mickey Bey said “This could be one of the fights of the year.”

Just a week ago, I was in the nation’s capital, Washington, D.C. for the press conference for my fight.

It was the first time Adrien and I were actually face to face for our fight.

I believe on April 1st – I will be world champion.

“Once you replace negative thoughts with positive ones, you’ll start having positive results.” – Willie Nelson