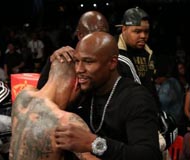 Against all the odds, I got myself to the pinnacle of boxing. The Mount Everest of my sport.

I fought the biggest name in my division, and held my own for eight rounds.

Two of the judges had me winning rounds one and two. Through eight rounds of boxing I won four of the rounds on the judge’s scorecards. There was four rounds to go with absolutely nothing in it.

I had won rounds six and seven. Adrien seemed to be feeling the pace. I had started the fight well. In the middle rounds I closed the gap. Then suddenly the referee stopped the fight, immediately after I was hit with an illegal low blow in the ninth round. He completely misread my reaction – I told him I’d just been hit low and to my amazement, he stopped the fight.

I was shocked, stunned and hugely disappointed by his actions.

Many in attendance and viewers watching across the world were as confused by the referee, Luis Pabon.

My dream was shattered by a bad mistake from the referee. I gave my all for eight rounds, therefore I have no regrets.

Over the next two days, the residents of Washington DC surrounded me and were warm and generous with their praise and their feelings. They showed me genuine love. I honestly couldn’t go to the bathroom without being asked for a photo. It really mattered a lot to me.

The many messages of support from across the world were really heartfelt and touching.

Floyd Mayweather shared with me that after a couple more wins and I’ll be fighting for the world title again. I appreciate this man so much.

People don’t get to see the caring side of him and what a good and huge heart he has. I’ll forever be grateful to him.

Adrien Broner sent me a text message and tweet to say what a great fight we had and how tough I am.

For a 12-1 underdog, I held my old with a four weight world champion, a young legend.

I’m still disappointed I didn’t win. It hurts me that it didn’t go the twelve rounds. I believed 100% I would win.

Floyd told me before the fight. “Go out there and give your best. Win this title and be a part of history”. I really tried, but referees make mistakes and the referee’s one mistake, cost me the fight.

The last few months have been amazing. My training team did a remarkable job. I was in the best shape of my life, so huge thanks to Dave Brown, Nate Jones, Bob Ware and Marcele Johnson.

Last but not least, René Carayol, we met exactly five years ago. We had a goal to get to where we now are, and thank you for seeing the potential in me I really never saw.

To my Mum, Dad and my brother. It was great to see you guys here in America. Thank you for believing in my dream for so many years in London.

I owe you guys everything.

I’ll be back! Stay tuned.