Ashley ‘Treasure’ Theophane was born in Paddington, London on August 30th, 1980. He dreamed of becoming a professional boxer as a child. At 5 years old, he would stay up watching all the big fights in Las Vegas and hoping to one day become part of the boxing industry. After taking up boxing in his younger years, Ashley decided to make his dreams a reality when he turned pro at the age of 23. He is now based in the entertainment capital of the world and has elevated his career within the sport of boxing as part of the Mayweather Promotions team. Read below to find out more about our featured fighter, Ashley Theophane.

Q: Which athletes did you look up to the most growing up and why?

As I was growing up, I looked up to Michael Johnson, Mike Tyson, and Andre Agassi. They were the best at what they did and entertained audiences at the same time. I took up boxing, tennis, and other sports because of them.

Q: What’s the best part of being a professional boxer?

To me, there are many positive aspects when it comes to being a boxer. I’m originally from London and now based in America. I’ve had the opportunity to travel the world. I’ve had fights in America, Saint Lucia, Germany, and Luxembourg. I’ve met so many people throughout my career. I would never have the opportunity to meet these people if I wasn’t a pro boxer.
It’s an amazing feeling to achieve your goals.

Q: What is the most challenging thing for you in this sport?

The most challenging for me is the sacrifice you have to make to achieve your dreams. You need tunnel vision. You need to work hard and dedicate your all to what you’re doing. I’m very focused. All my energy goes to this sport. It takes a very strong-minded person to be a pro boxer.

Q: How did you get involved in boxing?

I used to watch boxing with my dad when I was around 4 or 5 years old. It was just something I always wanted to do. I would see all the big fights in Las Vegas and just remember thinking that I wanted to be a part of that industry. It has motivated me to continue accomplishing my dream. Thirty years later, I’m now based in Vegas and signed to the number one boxer in the world. That’s an incredible experience in itself. 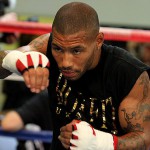 Q: What has been the biggest motivation for you to pursue your goals?

Like I’ve mentioned before, I’m originally from London. I was born in the city of Westminster and raised in Brent. I was surrounded by poverty and crime as a youngster. I didn’t want that life for myself. I wanted to go out into the world and live my dream. Making a better life for myself has always been the motivation.

Q:  What are the most memorable moments in your career?

Some of the most memorable moments for me were fighting in my father’s homeland of St. Lucia, becoming the British champion, beating Delvin Rodriguez in July 2010 was a surreal experience, and not to mention, getting signed to Mayweather Promotions. That’s just incredible. These are the four things I’m most proud of. I feel incredibly blessed. All these experiences all lead me to where I am now.

Q: You have twenty seconds to give advice to someone who wants to pursue a career in this industry. What would you say?

You need to surround yourself with a great team. That’s the key. You only can do so much by yourself. You need a great team to support you and believe in you. The people behind you can lift you to great heights if you work hard and dedicate yourself to the sport.

Q: If you could act as a character in any movie, which character would it be and why?

I’d love to be Superman! I would love to have the ability to fly around the planet and save people. That would be so much fun. I have to admit though that sometimes I feel like I have super powers!

Q: What other sports do you enjoy playing or watching?

I really enjoy swimming! That’s something I like to do in my free time. I watch tennis, soccer and other sports, but tennis and soccer are mostly what I gravitate towards.

Q:  What would you like to say to your fans?

I’d like to thank my fans for the support and well wishes. I’ve received so much love in London. It’s amazing. My fans in America and across the world have all really shown me a lot of support as well. I just want to thank them all so much for all the love! 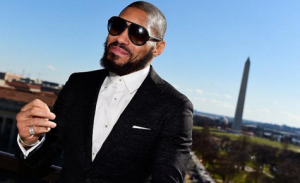