I’m giving everything I can and my mind and body are tired.

My team and I are focused and pushing hard towards Tuesday 22nd August. That is the day of the ‘fighter arrivals’ when Floyd Mayweather will meet Conor McGregor at most likely the MGM Grand.

Gervonta Davis is the co-main event. Badou Jack will be challenging Nathan Cleverly for his WBA ‘regular’ title and Shawn Porter will be facing Thomas Dulhome on the preview show. It’s a good TV card.

Ishe Smith and I will be fighting at Sam’s Town Casino. I got my 40th professional victory there in December. Ronald Gavril has got the opportunity to face David Benavidez for the WBC title vacated by Badou. That will be on September 8th in Los Angeles. Ronald is one of the nicest guys you’ll meet. I wish him the best! He was due to fight at Sam’s Town as well, until this opportunity came up.

Christy Martin was in the gym this week. She came up to me to ask me for a photo. I told her I should be asking you. “You’re the legend”. “The Coalminers daughter”. I remember in the 1990s when she was highly featured on Mike Tyson’s shows in Las Vegas.

IBO world champion, Chris Eubank Jr, was also in the gym this week working out.

The 5th ‘back to school’ drive was this week. The Mayweather Promotions fighters turned out to support the special goal of giving back to the kids of Las Vegas.

Floyd Mayweather was on top form this week. He made one of his sparring partners ‘take a knee’ four times. He made another quit during sparring, running out of the gym. He’s amazing, at 40 years old and the man is still going strong. 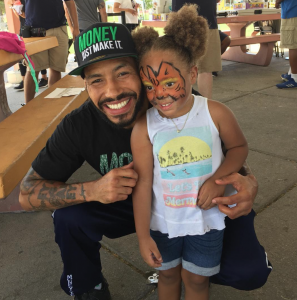 It’s 2 more weeks until I have my 49th professional fight. I never thought I’d get this far when I turned professional 14 years ago. I currently have 40 professional wins – 10 more wins until I retire.

It’s been an interesting and fascinating ride. Boxing is truly a roller coaster. Nothing is guaranteed. I’ve managed to achieve things that many said I had no chance of doing whilst lasting longer than a lot of British boxers of my era. Very few are still around that turned professional 2002 to 2004. That alone shows how well I’ve done but it all must come to an end – one day.

Life after boxing is now obviously on my mind, but that itch to compete that has always fuelled me is very hard to go without. I have worked extremely hard to be constantly motivated and in peak conditioned to fight. To push my mind and body to breaking point and it is still there. Will it ever go? I doubt it. It’s the competitive drive in me that fuels me to achieve my goals.

I’d love another world title shot. I’d love to be British champion again. While I’m focused on my boxing career and achieving 50 professional wins. I know that my life after boxing is approaching and I also need the same motivation and preparation for whatever I choose to do next.

That’s the future, for now, it’s all about Tuesday 22nd August at the Sam’s Town Casino, I’ll be having my 10th fight with Mayweather Promotions.