Going Back to My Roots

I was born in Paddington, London on 30th August 1980 at St. Mary’s Hospital, which like many other vital local facilities, has now been demolished for some smart, fashionable and expensive apartments.

I was happy in my childhood, surrounded by family and friends. Growing up in a neighbourhood that I understood and had many good friends around. Like many around me, I didn’t notice there wasn’t much money in the household. I had everything I needed.

I attended Our Lady of Dolours RC primary school and then went to Cardinal Hinsley RC secondary school.

I went on to get my GCSEs and a GNVQ in Leisure and Tourism along with my BTEC Media qualification.

Instead of going on to university, I pursued my dream of a career in boxing.

I’ve fought and won in 6 countries. I reigned as British champion, I’m a four-time international champion and a world championship challenger. As well as moving to Las Vegas to work with Floyd Mayweather, the best boxer of the last 30 years.

Having travelled wide and far in my career, London is the best city in the world, but right now we are going through some serious and worrying problems.

Street crime among youngsters is rising and seemingly uncontrolled. Far too many youngsters have been needlessly and recklessly murdered and injured. Something needs to be done. It’s become scary for many parents raising their kids in the capital.

Boxing has helped change many lives and Anthony Joshua is the biggest contemporary example. He’s the current superstar boxer in the UK. He got into trouble as a young man, but boxing steered him away from that. Just look at him now. He’s the most wonderful example and role model for so many without hope, or who can’t see a positive way forward for themselves.

Last year I had the pleasure of working with Momentum and helping Jeremy Corbyn during the general election. He saw and felt the real problems many youngsters are facing and connected with them.

In June this year, I was a special guest along with Olympic and world champion, James DeGale at the opening of the new Moberly Sports Centre in Westminster. This is an important and positive initiative for all in the area. Having cohesive communities no longer happens naturally. We all need to take a moment to think about what more can we all do to build the better Britain we all need and deserve.

We need more positive activities that bring us together and vitally, remove the more dangerous choices that attract those with nothing better to do.

In August, I attended a fundraising event for the survivors of the Grenfell tragedy. It is vital that we never forget what happened and continue to do what we can for those who are still suffering from all the adversity that such an incident brings.

All Stars Boxing gym over the years has helped hundreds, if not thousands of disadvantaged kids and adults in the community. I’ve been a keen attendee here for many years now. I’ve been donating my time and headlined a special workout class, so participants could have the opportunity to donate to the gym. 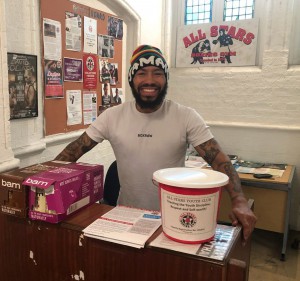 I’ve recently developed strong relationships with a handful of local young boys to spend time with and look to inject some positivity into their lives. There are many issues and challenges that face these youngsters and far too many fatherless homes in the communities across London. I’m happy to be engaged with them, and I’ll do what I can to offer some hope to these kids.

This is what my life will focus on after my career in boxing is over. The privilege of being able to ‘give back’ in my own small way. We are carefully and cautiously building an appropriate plan that will involve some like-minded partners to enable us to do this on a significant scale.

It’s a natural extension of what I have had expertise and experience in that I’m working on getting my own boxing gym where I can help youngsters to be the best they can be.

Everything starts with a dream, then a plan, then if the right resources can be found, then its down to courage and hard work. That I can do.