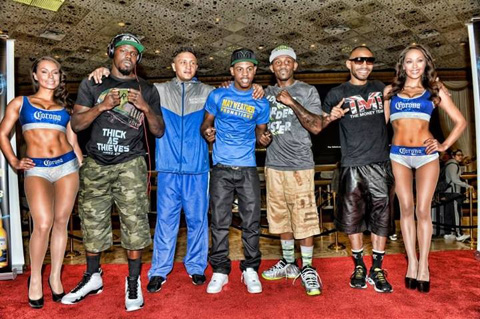 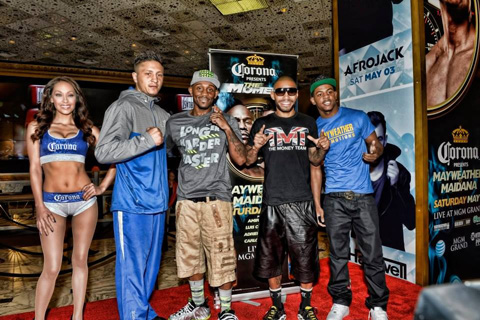 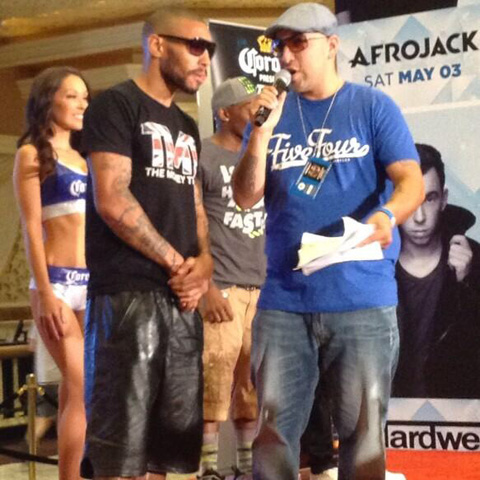 Media day this week at the Mayweather Boxing Club was an event in itself.

The best of America’s boxing reporters were on hand to watch the team work out, and they were keen to get our thoughts on our respective fights and the main event.

They listened intently as I gave my responses – “I don’t ever worry about my opponent… Experience counts… I’ve been here before… I’m beyond ready… I’ve never been knocked out before… It’s going to be an action packed fight… I’m one win away from a world title fight… I’m focused… It’s all about getting the W… I’m good for another few years… I’m still young and hungry.”

That’s why there are so few Brits fighting abroad on the world scene. It’s risky business.

I finished off my week with quality sparring with Ishe Smith, Mickey Bey and Zach Cooper, who has just been hired by Erislandy Lara to help him prepare for Saul ‘Canelo’ Alvarez.

I’m only a few pounds above my contracted weight limit. The stage is now set.

The team finished the week with a BBQ for family and friends.

The week ahead will see the ‘fighter arrivals’ on Tuesday, ‘fan workout’ on Wednesday, Press conference on Thursday, weigh in on Friday – then Showtime on Saturday. All at the luxurious MGM Grand in Las Vegas.

Tune in to Showtime in America and BoxNation in the UK.

The biggest boxing event of the year is now upon us – and I’m ready and cannot wait! 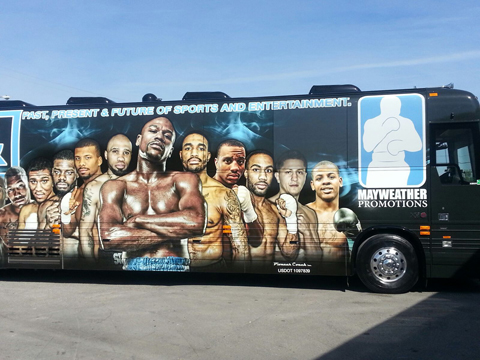 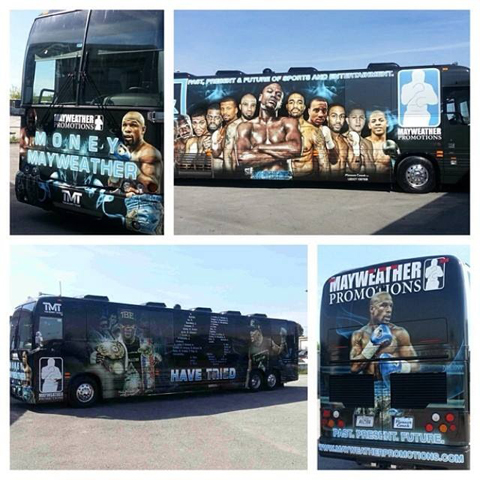 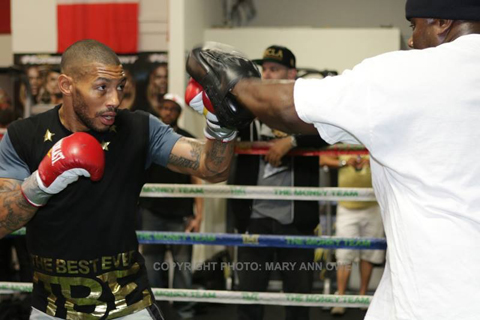 Huge thanks to Mary Ann Owen 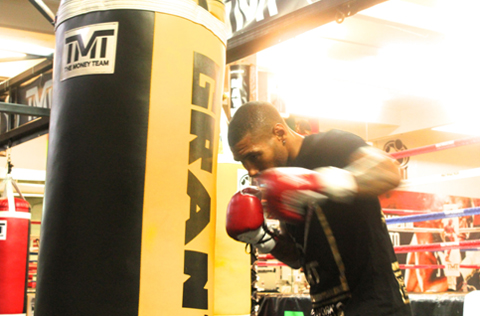 Cornelius Boza Edwards is being inducted into the Nevada Boxing Hall of Fame this summer, on Friday, The Money Team attended the inductee party which announces the boxing legends that are about to be inducted.

Boza thoroughly enjoyed the night. Floyd took to the stage and spoke to everyone in attendance about how much he values and respects Boza. That was a nice touch. A former world and European champion; Boza fought over 20 times in London, making his debut there. We have even fought at the same venues. He is appreciated more in America than in the UK. A special man!

Over the weekend I completed two photo-shoots at the Mayweather Boxing Club. One was for Mayweather Promotions and the other was for a photographer who had flown in from Los Angeles. I’m looking forward to seeing the end product.

The weeks are flying by. Fight week will be here in no time.

May 3rd at the MGM Grand Hotel and Casino in Las Vegas is another big occasion. The Superbowl of boxing.

R’n’B star Lloyd, Hollywood director John Singleton and Hip hop legend Doug E. Fresh, all popped into the Mayweather Boxing Club to watch Floyd workout this week. Doug even commented it was “like going to watch a superman movie”. NFL and NBA players often come into the gym and they are always mesmerized by the work Floyd puts in. I love it! I get to watch ‘greatness’ day in, day out. The best of boxing is my boss.

Working with Floyd and Leonard is a pleasure and something I am grateful for. From the first day I walked into the gym, they made me feel at home.

I represent Mayweather Promotions, but I also represent the United Kingdom across the world. DAMN! Life is good. 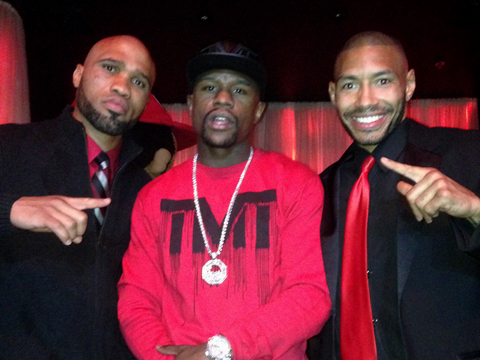 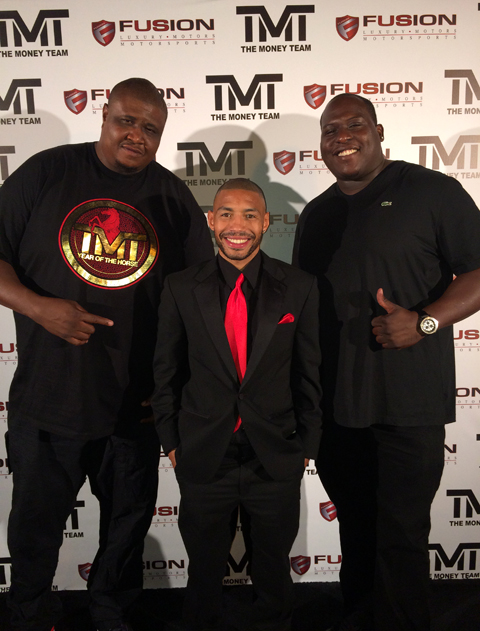 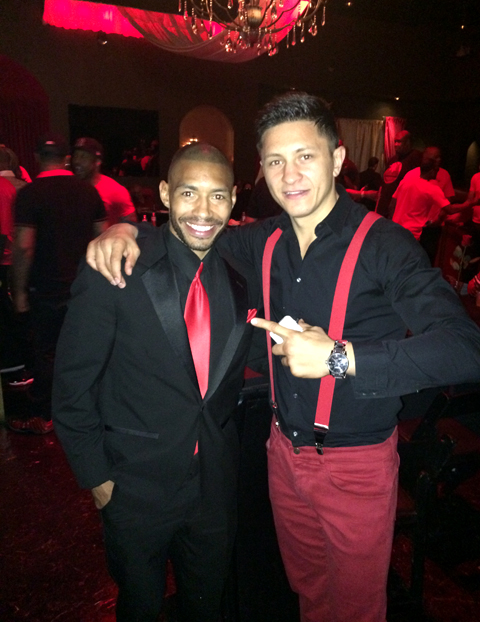 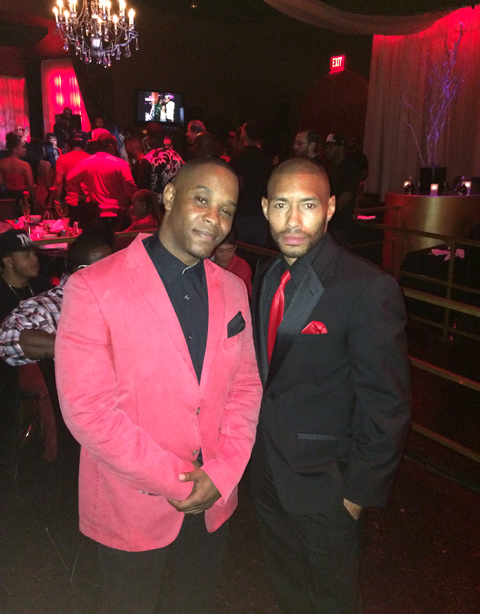 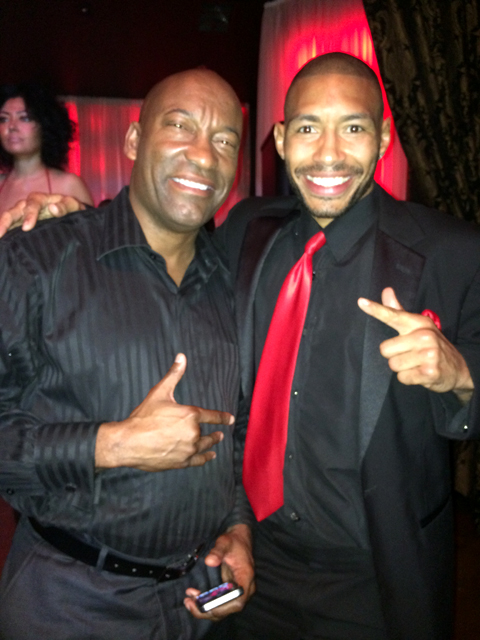 STAYING SHARP ON THE MITTS WITH NATE JONES

AshleyTheophane @TheRealInsano @GaryLineker Britain and other European nations should follow the Germans lead then and apologize to… https://t.co/J0tVYKPNns

AshleyTheophane @rocketreidy @GaryLineker When the British Empire is still making money from their oppression of Africa and the Car… https://t.co/NA4FI8pPFy

AshleyTheophane RT @FINALLEVEL: At the end of the day it’s basic 'HUMAN RIGHTS'… Thats what this is all about…