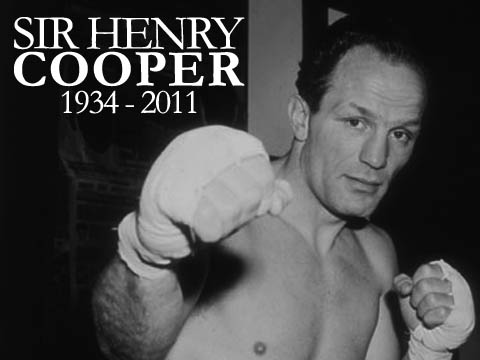 Sir Henry Cooper passed away on Sunday at the age of 76, after a remarkable career that saw him win the British, Commonwealth and European Titles and become the only fighter to win three Lonsdale belts outright.

Only the World title was missing from his incredible list of accomplishments, which also saw him represent Great Britain at the Olympics, twice win the BBC Sports Personality of the Year, land two ABA light-heavyweight titles and be awarded an OBE and a knighthood. After hanging up his gloves he became a regular face on television and was also a published author; cementing his unquestioned position as the most popular fighter ever to come out of these shores, with a legacy that will live on forever.

As a British title holder myself, it is an honour to currently have the belt that Mr.Cooper previously held and had great respect for. He was a true British inspiration for me and for all who have had the privilege of winning a Lonsdale belt – which he singlehandedly made a trophy us British boxers value so much.

He dominated the British scene over a twelve year period and, even though I was not born whilst he was in his dominance, his left hook is the stuff of legend. He floored the great Cassius Clay before losing in the next round by cuts and was seconds away from beating the greatest sportsman to ever live.

Put simply he made his family, friends, Great Britain and the entire Boxing establishment consistently proud throughout his career and was a giant among men.

Our ‘Enry won’t be forgotten – and this is a heartfelt ‘thank you’ to someone I will always hold in the greatest regard and will forever afford the deepest respect.