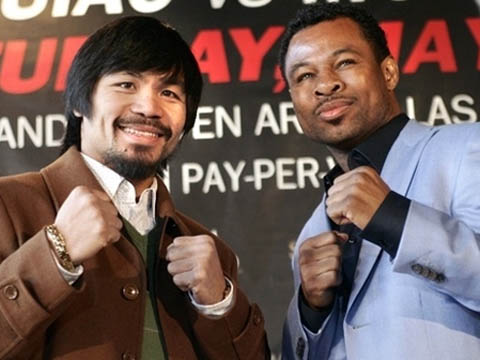 The big fight is upon us, Manny Pacquiao vs Sugar Shane Mosley.

Saturday night in the US will see two future ‘hall of fame’ fighters go head to head and Shane Mosley has one of the best records in the fight business.

He has fought a boxing ‘who’s who’ in his career – starting in the late nineties when he was blowing fighters away in the lightweight division, from which he skipped Junior Welterweight and went straight to Welterweight to seek big fights with the late Vernon Forrest, Miguel Cotto and Oscar De La Hoya.

The man has never backed away from a challenge and at the age of 39 is looking to shock the boxing world the same way he did when he was an underdog against Antonio Margarito.

But Shane Mosley is not in the best of form at the minute, with his last fights resulting in a draw against Sergio Mora and a loss to Floyd Mayweather Jr.

Yet Shane has been amongst the elite level of the sport for 14 years now and has speed, skills and a rock solid chin. He is up for this and he is not coming for a pay cheque – I would never write Shane Mosley off.

I’ve been an underdog for majority of my career and I have beaten Corley, Rodriguez, Daws and Bosworth when I wasn’t supposed to have a chance.

In boxing at the top level, the underdog always has a chance. David Haye is seen as the underdog when he travels to Germany to fight Wladimir Klitschko but I am confident he can walk away with the Ukrainian’s titles.

Back to Saturday’s fight and despite everything I have said about Shane, Manny Pacquiao is the man of the moment. He is an inspiration to many people all over the world.

He has come from poverty to achieve his much-deserved success and now has a seat in Congress in the Philippines. He has even had success as a pop and movie star in his homeland – everything this man touches at the minute turns to gold.

He has won his last thirteen fights going back to 2005 and last lost to Erik Morales, who has just come out of a candidate for ‘fight of the year’ with Marcos Maidana.

If you look at common opponents, such as De La Hoya, Margarito and Cotto, you would have to side with Pacquiao as he stopped two of the three. Mosley stopped Margarito in a fight where Mosley seemed to turn back the years but two wars with De La Hoya and a close decision defeat to Cotto doesn’t seem to give Mosley too much hope for this fight.

But let’s not forget Mosley fought Cotto, De La Hoya and Margarito in their prime, whereas Pacquiao got them when they had seen better days.

Mosley is 39 years old and is perhaps on his last legs but even if he was to lose this fight I could see him fighting Victor Ortiz or Andre Berto in the future.

Pacquiao is only 32 and with a record of 57 fights he clearly has a few more years in him. It now begs the question, “Who else is there for Manny to beat?”

Floyd Mayweather is the last man out there but that fight is nowhere near happening as Floyd has outside problems going on with court cases taking up his time.

Mosley and Pacquiao both have big fight experience so nobody will have the edge here. Mosley is the bigger man but Pacquiao has beaten bigger men in the past so that will not be a problem.

Pacquiao ‘s style may frustrate Mosley at first as he has the better hand speed but Mosley has the edge in power so that levels the playing field.

Freddy Roach is widely seen as the best trainer in the world and you can see that in evidence with what he has done with Amir Khan. Manny trusts Freddy with his life and their relationship seems rock solid.

Naazim Richardson is also a good trainer and maybe a future great trainer; what he has done with Bernard Hopkins is amazing. He is a straight-talking man and honest as well – I feel Shane has a lot of respect for him and he will have Shane in great shape.

But Shane has been sparring with former World champion Demarcus Corley, who I beat three years ago in New York state, and I’m not sure if I would hire Corley as he has seen better days.

I’m just not sure Richardson will have a back-up plan as he seemed lost when Floyd Mayweather started to play with Shane in the latter rounds of their fight.

It’s going to be a fascinating contest.

Shane Mosley will be motivated to show he is not past his best and has something more to give boxing, whilst Manny Pacquiao is incredible.

I went to Los Angeles for a week in 2009, after spending a month with Dmitriy Salita up in the Poconos mountains, whilst training for a fight with Zab Judah at Madison Square Garden which fell through. I train hard, as anyone who knows me will tell you, but Manny was on another level when I saw him first-hand. He would go to war with his sparring partners, which included WBA World champion Amir Khan, and afterwards would hit the bag or hit pads.

He was jumping around like an energy bunny after twelve hard rounds in a hot, packed Los Angeles sweat box gym. Roger Mayweather and Bernard Hopkins think Manny Pacquiao is using some sort of performance enhancing drug but he has consistently passed all drug tests so has to be assumed to be clean.

I was inspired watching him and on my return home, I upped my training regime.

It’s this that has helped me with wins over world number three Rodriguez and British champion Daws.

Personally I don’t know if Shane Mosley can keep up with Pacquiao ‘s energy through the twelve round fight. Maybe Manny will wear Shane down but I just can’t see Shane being knocked out; maybe the corner will throw in the towel as Mosley is a fighter and certainly won’t quit.

Money is not a driving force for Manny Pacquiao but he gives out millions to his people in his homeland which will be hard to keep doing when he leaves boxing. Shane Mosley also has different motivations as he has gone through a nasty divorce with his ex-wife, who has demanded some of Shane’s World title belts. Floyd Mayweather commented in a press conference that Shane had fallen on hard times since his split with his wife so who knows where Shane’s mind is.

He has recently met Cuban bombshell Bella Gonzalez and their relationship seems to be going well so Shane is probably in a happy place at the minute. He is also fighting the best in the world, so what more could he want?

Shane Mosley can win because he believes in himself, has power, speed, skills and big fight experience.

Manny Pacquiao can win because he has amazing fitness levels, brilliant speedy combinations and everything that Shane has.

Pacquiao has to have the edge in this fight but he has been knocked out in the past and I wouldn’t be shocked if Shane won.

But… If I had to choose, I’d go with Pacquiao as he is the man on form.

Watch this space, because for whoever wins this contest, Floyd Mayweather Jr. will be the only fight out there.